Those who plump for gun control often make a statistical case for it. They try to show: more guns, more crime, more deaths. They cannot show that. All they really show is what Mark Twain always said about statistics.

Statistics is a fancy word with a simple origin. It comes from the Greek root -sta-. You will recognize that root in English words like stand and stay. They all mean the same thing: to keep in one place. So statistics is all about knowing where you stand. 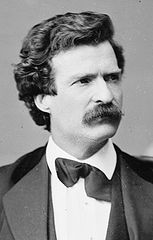 Mark Twain, detail from a photo by Mathew Brady, February 7, 1871. From the Library of Congress.

There are three kinds of lies: lies, d____d lies, and statistics.

Mark Twain always told people he was quoting Benjamin Disraeli, Prime Minister of the United Kingdom. Historians deny that Disraeli ever said any such thing. Maybe Twain himself made it up. But he told no lie when he said that.

Furthermore, Carroll D. Wright had a rare moment of candor. He told the 1889 Convention of Commissioners of Bureaus of Statistics of Labor that:

Today in the gun control debate, many liars have “figured” that people will accept their figures as the whole story. They might not actually rig the figures. But they show only some of the figures. They don’t show the figures that weaken their arguments.

Part of the problem is that things rarely, if ever, keep in one place. They move, and change. But people still use the word statistics to name the figures that show that kind of change. So it’s easy to forget that things change, and think that things stay (that root again!) in one place. And those who want to lie with figures, commonly use our forgetfulness to confuse us.

Which is what those who want gun control are doing now.

When authorities try to persuade you to accept gun control, they quote one statistic more than any other. They compare the murder rates in the United States and in the United Kingdom and continental Europe. By so doing, they admit that gun control is a very European thing to do, and gun rights are an American idea. CNAV showed here that gun rights are one thing that makes us American. (Sadly, we’ve been forgetting that in the last hundred-odd years. It’s time to remember that again.)

Wikipedia has a telling article titled “Gun violence.” This article has a key section: “Homicide.” An interactive table of “intentional homicides by country” dominates this section. (Homicide happens when one person kills another, and meant to do it, whether the law allows it or not. Justifiable homicide in self-defense is still homicide in this table.)

The figures in this table come from the United Nations Office of Drugs and Crime. They go to the year 2000, so the figures are already twelve years out-of-date. (Wikipedia’s “sysops” have asked contributors to add more recent figures.)

The best feature of a modern MediaWiki table is that you can sort its rows in order by any column in the table. This table shows homicide rates per 100,000 people, with firearms, without them, and overall. If you sort this table on the overall homicide figures, you find that England and Wales has the tenth lowest rate, and the United States the 23rd. If those two rows of the table were all you looked at, you would see:

And you might decide that the United States acts foolishly in offering this guarantee. That is what gun control advocates want you to decide.

But: look at all the other rows in the table. Whether the laws of any given country guarantee the right to keep and bear arms, or not, makes no difference. The right-to-keep-and-bear-arms column shows no clear trend. You see countries with high homicide rates, and low, whether they practice gun control or not.

Switzerland has its famous law, under which every household must have a gun, a soldier’s gun, in the house. Their overall homicide rate is fourth lowest among the countries in the survey. And the country with the lowest rate? The Emirate of Qatar, home of Al-Jazeera. The Emir of Qatar guarantees the right-to-keep-and-bear-arms to his subjects.

In fact, even the UN warns people not to compare homicide rates between countries to decide on any matter of public policy. Why? Because different countries define homicide differently, and tally homicides differently on their respective police blotters.

More figures from the England and America rows are worth looking at. The non-firearm homicide rates are almost the same. They are 1.33 per 100K in England and Wales, and 1.58 per 100K in America.

How do these rates change? The site JustFacts.com has an excellent gun control page. They show how the homicide rates change over time, and show when gun control laws went into effect, or out of effect (from repeal or by court order). The graphics on this site are telling.

Washington, DC, in 1976, forbade anyone to carry a handgun. It also said that anyone having a gun in the house must not load it, and must even take it apart or lock the trigger. In 2008, the Supreme Court threw that ordinance out as unconstitutional. And in between, the overall murder rate more than doubled by 1992 before finally falling back down. The gun control law made no difference overall. (It might have made a difference to people who died because they couldn’t defend themselves. And it certainly did not stop the murder rate from ratcheting up rapidly after it came into effect.)

Chicago’s experience is similar. It shows the same spike in murder rates in the last decade of the twentieth century. Murders eventually slowed down, as they did in Washington, but not on account of gun control. In fact, the proportion of murders done with a handgun kept rising.

The UN never said that England and Wales saw no homicides. But JustFacts.com shows that the homicide rate climbed steadily since 1968, the year of a key gun control law in England. In 1997, England passed another gun control law. That law did not stop the rise in homicides.

What happens when you repeal gun control? Most States now are passing laws that let you carry a weapon, either openly or concealed. Illinois refuses to issue any carry permits. Nine States leave it up to the local police chief. The rest compel the local chief to issue the permit unless he has an objective reason to refuse it.

The experiences of Florida, Michigan, and Texas tell the tale. Within a few years of each State’s shall-issue carry permit law going into effect, their murder rates declined to the national average.

Accidents will happen, but more often WITHOUT guns

Suppose you have an accident with your gun? First, if you’re going to buy a gun, you should know how to handle and store it safely. (One cardinal rule: any gun you pick up is loaded until you make sure that it is not loaded.) In fact, most fatal accidents were traffic accidents. Poisoning and falling accidents ran a close second and third. And gun accidents? Sixteenth. And furthermore, a mere blip on the bar graph, barely enough to register.

And all this says nothing about how many crimes didn’t happen because the target had a gun. Sometimes all the target need do is brandish a gun and say, “Back off!”

But do you need an assault weapon?

First, whether the government has any business telling you what you need, is a very large, and unsafe, assumption. And second: you do. Katie Pavlich makes that clear in today’s Town Hall. She cites the Rodney King Riots in Los Angeles. Korean business owners had shotguns and semi-automatic rifles to defend themselves with. Those weapons proved effective. The police did not. They never responded.

Earlier this week, Georgia resident Melinda Herman had someone break into her home. She herded her children into an attic, and on the way managed to get her gun out of its safe. She nearly emptied her .38 caliber revolver into the intruder before he finally took the hint and ran away. She also called her husband. He called 911, the American emergency-summons number, and stayed on the line with his wife while he talked to the dispatcher. The transcripts read like a script out of a crime drama, and this one ended well. (In fact, you can hear him on the dispatcher’s tape, telling his wife to remember the shooting lessons he gave her.)

But: suppose more than one person had broken in? She would have run out of ammunition. And today we would be taking about Melinda Herman on a cold, hard slab, not suspect Paul Slater in custody and in the hospital. That’s why you sometimes need a thirty-shooter to protect yourself.

Carroll Wright was right: figures don’t lie, but liars figure. And gun control advocates are some of the biggest liars in American politics today.

Hand that rocks the cradle

“Switzerland has its famous law, under which every household must have a gun, a soldier’s gun, in the house.”

Uh, no it doesn’t. That’s an urban legend.

“The Emir of Qatar guarantees the right-to-keep-and-bear-arms to his subjects.”

The purchase or carriage of any firearm is illegal in Qatar unless the gun is registered with the Ministry of Defence. The law is rarely enforced though. Of course rates of gun ownership are far lower than in the USA and most privately owned weapons are antique muskets or bolt-action rifles. Anyone who causes concern to the authorities will find that the gun laws are rapidly and firmly applied to them.

That’s too bad. Switzerland used to do things far more sensibly. I see now that they have succumbed to the same “political correctness” that impelled them to violate the privacy of their famous Numbered Bank Accounts.

No, they’ve never had a law that there must be a military rifle in each home. What they DO have is a law that members of the militia (i.e. all male Swiss citizens with no criminal record or mental health issues aged between 20 and 30) must keep their issue weapon at home. They don’t give everyone a sealed can of service ammunition any more, though.

No, they just got fed up with drunks using service ammunition to shoot their wives.