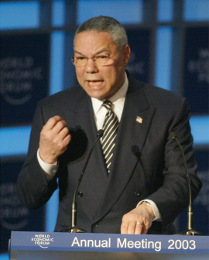 Make no mistake about it, Colon, oops, Colin Powell was not invited on Meet The Press because of his towering intellect and astute understanding of anything except perhaps, his expertise in underhanded treachery. If Mr. Powell were indeed a true Republican or even slightly conservative, his face would never see the warm and glowing smiles of the likes of David Gregory. War hero or not, a truly Republican Colon, oops, Colin Powell, would get the same treatment as Allen West or Justice Thomas.

But don’t be misguided here, Mr. Powell is not putting on a leftist façade to get on TV. Yes he is a fake, phony, fraud and always has been. He has used his blackness to weasel into the good graces of the Republican Party, while always hating everything it stood for. Colon, oops, Colin Powell supports the mass murder of children in the womb and opposes capital punishment for terrorists. He supports cuts to the military and tax increases on hard working business owners.

No ladies and gentlemen, what you have here is not a Republican, he is not even a Rino. Ungratefulness, treachery and deceit is what best describes Colon, oops, Colin Powell. Pretending to be a Republican has long done him well. Now, not too subtlety, he calls Republicans racists. The same party that paved the way for him and promoted him at every step of his chameleon life.

He voted for Obama. What do you expect?

Last election and the one prior, Colon, oops Colin Powell declared he voted for Obama, the single most destructive leftist this country has ever had to endure. Truth be known? Mr. Powell probably didn’t even vote for his boss, George Bush.

The gig is up. Colin, wow, got it right this time, I think, Powell is not a Republican. He can call himself whatever he thinks will get him on television, but the whole world now knows what he really is. A Rino’s [Heine].

Considering the behavior of Colin Powell’s effective boss, the above is incompetent, irrelevant, and immaterial.