I remember sitting in class one day in 1963. It was a time when the cold war was at its height and fear of a nuclear attack loomed in the back of everyone’s mind – including the children. We all knew that the threat was coming directly from the Communists – specifically the Union of Soviet Socialist Republics. The day I specifically remember was a day that my teacher taught us about Communism.

A misguided lesson about Communism

What did he teach? He taught that Communism was a “Christianly” form of government that took from those who had and charitably gave to those that didn’t have. He taught that it was compassionate and good and something all “good” people should be emulating. Of course this confused me more than just a little. If this was Communism, why were we, a supposedly Christian nation, fighting so hard against it? Shouldn’t we be welcoming its precepts with open arms and instilling its principles in our government? Fortunately, I had a good relationship with my father, so I did what was natural for me – I asked Dad – and Dad set me straight. But even until today, I can’t help wondering about my fellow students who sat in that classroom back in 1963 – how many of them didn’t go home and ask their mother or father about what this teacher was teaching. Did they embrace what this teacher was peddling and did that philosophy that was taught in the classroom back in 1963 become the philosophy we are seeing in government today?

1963 was 50 years ago and I’d be lying if I told you I remembered the exact words my father spoke. But I do remember that he clearly explained that absolute power corrupts absolutely. He taught me that the pretense of a benevolent government is nothing more than a wolf in sheep’s clothing, meant to lure its prey into a lifestyle that it thinks is Utopian, while seeking to concentrate power into the hands of would-be tyrants. He pointed out that the USSR was the perfect example of Utopian ideals playing out in reality. These ideals did not create the “perfect” environment for its citizens; it created an amalgam of deceptive ideals that do not take care of the needy but expand the power of tyrants. As a matter of fact, it results in more poverty and more servitude with less ability to fight against these atrocities. Is this really the path liberals in America today think attractive or are they the would-be tyrants of today? 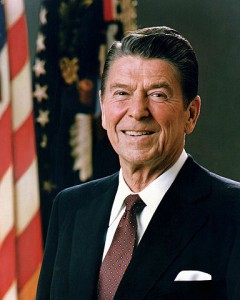 That’s what my father said about Communist and its progenitor, Socialism. But what would Ronald Reagan say about socialism? In an address made on behalf of Senator Barry Goldwater, dated October 27, 1964, now known as Reagan’s Rendezvous with Destiny speech, Ronald Reagan had much to say about issues that are relevant today. (See Clip One for the highlight, or Clip Two for the entire speech.) Here are some excerpts from that speech:

…Back in 1936, Mr. Democrat himself, Al Smith, the great American, came before the American people and charged that the leadership of his party was taking the part of Jefferson, Jackson, and Cleveland down the road under the banners of Marx, Lenin, and Stalin. And he walked away from his party, and he never returned to the day he died, because to this day, the leadership of that party has been taking that party, that honorable party, down the road in the image of the labor socialist party of England. Now it doesn’t require expropriation or confiscation of private property or business to impose socialism on a people. What does it mean whether you hold the deed or the title to your business or property if the government holds the power of life and death over that business or property? Such machinery already exists. The government can find some charge to bring against any concern it chooses to prosecute. Every businessman has his own tale of harassment. Somewhere a perversion has taken place. Our natural, inalienable rights are now considered to be a dispensation of government, and freedom has never been so fragile, so close to slipping from our grasp as it is at this moment.

…We have so many people who can’t see a fat man standing beside a thin one without coming to the conclusion that the fat man got that way by taking advantage of the thin one. So they are going to solve all the problems of human misery through government and government planning. Well, now, if government planning and welfare had the answer and they’ve had almost 30 years of it, shouldn’t we expect government to almost read the score to us once in a while? Shouldn’t they be telling us about the decline each year in the number of people needing help? The reduction in the need for public housing?

Other men speak from an even earlier age

Here are some notable quotes on Communism/Socialism from past great thinkers:

A wise and frugal government, which shall leave men free to regulate their own pursuits of industry and improvement, and shall not take from the mouth of labor and bread it has earned – this is the sum of good government. Thomas Jefferson

I predict future happiness for Americans if they can prevent the government from wasting the labors of the people under the pretense of taking care of them. Thomas Jefferson

A democracy cannot exist as a permanent form of government. It can only exist until the voters discover that they can vote themselves largesse from the public treasury. From that moment on, the majority always votes for the candidates promising the most benefits from the public treasury, with the result that a democracy always collapses over loose fiscal policy, always followed by a dictatorship. Professor Alexander Tyler over 200 years ago

The best social program is a productive job for anyone who’s willing to work. President Ronald Reagan.

I hope we have once again reminded people that man is not free unless government is limited. There’s a clear cause and effect here that is as neat and predictable as a law of physics: as government expands, liberty contracts. President Ronald Reagan.

One of the great mistakes is to judge policies and programs by their intentions rather than their results. Milton Friedman.

In a day and age when our liberties are being threatened along with our right to bear arms, it is more than fitting to end with this quote from Patrick Henry when debating James Madison for adoption of the Bill of Rights:

What do George H.W. Bush, Mikhail Gorbachev and David Rockefeller have in common?