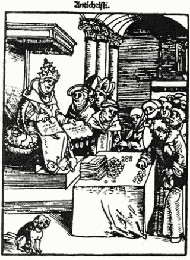 Every once in a while there is profound advice in a popular song. Back in the 1960s, the Chiffons had a hit song entitled, “Sweet Talking Guy.” It began like this:

Don’t you believe in him, if you do he’ll make you cry.

The Chiffons, however, were not the first kids on the block to realize how well-spoken words can mask less than well-intended actions. Words are powerful and can be used as a force for good as well as evil. History has proven that, but unfortunately we have not learned our lessons from history. Therefore, we are doomed to fall prey to the same traps of “sweet talking guys” over and over again.

Before we delve into the word traps used for evil, we should realize that words can also be used for good. As a creationist I often ask – What was the first thing God created? Usually I get the same answers: light, earth, water, and some of the more profound thinkers will say time and space. Actually, none of those answers are correct. The first thing God created was words, or by extension, sound waves. He spoke everything into existence. (Psalm 33:9) That information should open many doors of understanding regarding the power of words. Our power to create with words isn’t up to the same standard as God’s but it is one of the things that makes us like Him, for we are also able to create with words. As matter of fact, if you consider that there is a difference between creating and making (creating being bringing something into existence without using any other material, and making being bringing something into existence by using other materials), then you will understand that in this regard, we are the only creatures on earth “made” in the image of God.

Unfortunately, the power of words has not been restricted for the force of good. Evil men have also discovered this power. One of the most noteworthy would be Adolf Hitler. In Mein Kampf , Hitler, the master of propaganda, explains his technique of propaganda while using propaganda by painting himself as someone the German people would idolize. It was said that Hitler could mesmerize a crowd and almost put them in a hypnotic state just through the use of words. Today we might call this type of word usage “charisma.” Whatever you call it, it can be used for good or if used for evil, it can be lethal. Today our politicians have used to use it to amass power, while good would-be leaders, with few exceptions, haven’t learned to use it at all.

In the debate between candidate John F. Kennedy and Richard Nixon, it was clear that Kennedy learned how to use words coupled with personality – thus the transformation into more charismatic-type of speech that could sway the masses. The age of media has chosen the winners and losers of political campaigns for us by bringing these charismatic leaders into our living rooms, i-Pads, and computer screens. It has made rock stars out of men like Chris Christie and Barack Obama. While Christie has managed to make people believe he is a straight-shooter, watching him at a recent town hall meeting made me walk away realizing that it didn’t matter what he was selling, everyone in that audience on that day was buying. The man is more charismatic – more of a sweet-talking guy – than most realize and could easily have a second career in the field of entertainment if this whole 2016 bid for the presidency doesn’t work out for him.

Then there is Barack Hussein Obama, the master of all masters. While he was campaigning in 2008, I often found myself nodding my head and smiling as he spoke – in spite of knowing he was a man to be feared. Two minutes afterward, I found myself asking “now what did he just say?” The answer was usually nothing! Plus he has an extraordinary way of saying things that are sinister and making them seem good somehow – like “fundamentally transforming America.” We now know that means – scrapping our Constitution and circumventing our laws. Or how about “Change you can believe in”? Of course he never explained what that change would be, so mindlessly the masses kept smiling and nodding their heads in agreement, projecting everything they believed to be good into his words. Obama has not used his power of mesmerizing the masses with his words for good. He has learned the power of the spoken word and has used it to mask his lies and make you feel good about the evil he is about to unleash on America.

The Bible says that the anti-Christ will be a man with power in his mouth. Today I can think of no two men with more power in their mouths than Obama and Christie – oddly enough, America’s currently most famous couple. Unless Americans learn to look at what people do instead of what they say, our country may be doomed to elect the most evil among us. But great hope lies in the fact that God Himself, being the creator of words, can also anoint leaders for us who will use this power for good and to restore our liberties. 1 Timothy, chapter 2, verses 1-2, tells us to pray for our kings and leaders that we may lead a quiet and peaceable life. And that, my friends, is the most fitting ending to this post that I can write.

Reprinted from The Daily Rant.

Countrycide – not for cows and horses

Communism and Socialism: Thanks, Dad!