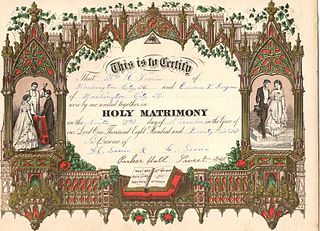 On Tuesday (March 26) the court will hear argument on California’s Proposition 8. That instrument amended the Constitution of California to say that the term marriage may apply only to one man and one woman. Critics of this amendment allege that marriage, even between same-sex roommates sharing bed (SSRSB), is a universal “privilege and immunity of citizens of the United States” within the meaning of Amendment XIV. Therefore, no State may forbid it.

The next day (March 27) the court will hear argument for and against the Defense of Marriage Act of 1996. That Act simply says that the federal government may not force a State, without its consent, to recognize two SSRSB as married, just because they move out of a State that gave them a marriage certificate and into a State that would not have done. The Act also addresses questions of federal law as they apply to married couples.

What are the privileges and immunities of marriage? 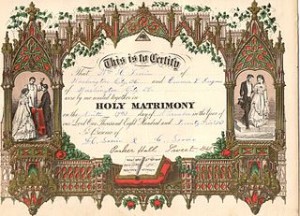 The term marriage carries with it certain privileges and immunities under common law. They include:

Mere roommates get none of these privileges.

What about adopting children?

Those who say that SSRSB ought to be allowed a “marriage” say,

But we thought you said two parents were better than one! Why, then, not let a child of either roommate have two effective parents?

But that’s not all “we” said. The two parents mean father and mother. They do not mean “Heather’s Two Mommies” or “Daddy and his Roommate.”

How can practicing homosexuals advise a child going through puberty? Here those who want “same-sex marriage” split into two camps. The male homosexuals insist that they were born that way. For years they tried to suggest that a “gay gene” exists. Well, suppose they are correct. Now suppose they adopt children. Those children will hit puberty, and feel things they never felt before and don’t know what to do with. What shall homosexual roommates tell them? “We can’t help you; we were born gay, but we guess you’re not”?

And if they adopt a girl, how can they advise her on dating, when they never considered that question before?

But of course, no such thing as a “gay gene” exists. The scientific community admits as much. Instead they speak of “epigenetic influences.” And what are they? They include the lessons one learned as a child. And no one has ever shown a solid basis for human biological behavioral determinism. If such a thing existed, it would become an instant defense against any criminal charge. Or form the basis for discrimination for genetic heritage. How hypocritical these activists are, that they want to claim a genetic excuse for one form of behavior while denying such a cause for other behaviors.

Lesbians, or female homosexuals, do not plead heredity. They boast that they made a choice to be what they are. And lest anyone doubt why they made this choice, look at their favorite activities. They are: sports, especially organized sports. And more often than not, these sports include:

And what does an athlete do in each of those sports? They hit a ball with a stick! In fact, so many lesbians go in for softball that many gay activists cried “Foul (ball)!” when The Wall Street Journal published a picture of Ms. Justice Elena Kagan – at bat during a softball game.

They know that homosexuality is a learned, teachable, and recruitable response. And they are active recruiters.

Two lesbians are highly unlikely to adopt a boy. (Unless they intend to transfer to him their hatred of men, but that would become a case for their State’s Child Protective Service.) More likely they will seek to adopt little girls and work to inculcate some sort of neo-Amazonian values into them. (And of course Amazonian in this context does not mean “of or pertaining to the tribal cultures on or near Brazil’s Amazon River”!)

The tax treatment of marriage

So what will they next advocate for? A new tax law that says all roommates must file a common tax return that covers the whole “household”? Will they replace “married” with “roommate” and “single” with “unattached” wherever it appears above?

Happily, Senator Rand Paul (R-KY) and others hope to scrap conventional income-tax laws, with their arcane Filing Statuses. They hope to tax everyone at the same rate, regardless of income or relationship. Income taxes damage the economy in ways that go far beyond Filing Status questions. So the change Rand Paul advocates would be a welcome relief.

The Constitution has two passages that relate to these cases.

Full Faith and Credit shall be given in each State to the public Acts, Records, and judicial Proceedings of every other State. And the Congress may by general Laws prescribe the Manner in which such Acts, Records and Proceedings shall be proved, and the Effect thereof.

Marriage is a public record. Divorce is a public judicial proceeding. So: Every State must recognize a marriage granted in another State. And what that means in practice is ipso facto the business of Congress to say.

So the Defense of Marriage Act is nothing short of the duty of Congress to say what any State may do with a marriage certificate that an SSRSB pair bring in from another State.

No State shall make or enforce any law which shall abridge the privileges or immunities of citizens of the United States.

Where is marriage in all this? For answer, turn to Amendment IX:

The enumeration in the Constitution, of certain rights, shall not be construed to deny or disparage others retained by the people.

Meaning that the Constitution recognizes a person’s rights at common law.

Now: do same-sex roommates sharing bed have the right under common law to marry? Not a single precedent at common law so alleges. And to claim that it did, would let people make a “public act and record” of all sorts of intimate living arrangements, including:

These are unknown to Western common law. So they have no protection under the Constitution.

One professing female homosexual, with surprising candor, says: No!

That causes my brain some trouble. And part of why it causes me trouble is because fighting for gay marriage generally involves lying about what we are going to do with marriage when we get there – because we lie that the institution of marriage is not going to change, and that is a lie.

Masha Gessen deserves this much credit: she’s honest. Honest as no other “same-sex marriage” advocate ever has been. She even admits: “We’re lying about where we want to take marriage, and we know it!”

And what would she have in its place? She gives this clue:

I have three kids who have five parents, more or less. . . . I would like to live in a legal system that is capable of reflecting that reality. And I don’t think that’s compatible with the institution of marriage.

Five parents, more or less? What’s that about? Ms. Gessen gives no clue. Those who quote her have no clue. One can only guess. The relationship is likely not biological at all, but legal: she plumps for the commune in which all adults share responsibility for all the children and stand mutually in loco parentis.

Your definition given in the article of epigenetics is simply and utterly wrong. The video at the bottom even states as much. The video describes epimarks influencing gene expression being inherited from parents in the case of homosexuality. Environmental influences (both before and after birth) are a factor, but this radically different from “the lessons one learned as a child”. That’s something that happens at the mental level. This is described as an influence at the level of gene expression.