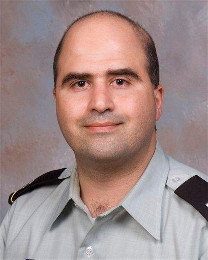 In our topsy-turvy-Alice-in-Wonderland-type of world, things often just don’t make sense – especially things in government. The Department of Defense reached new heights of absurdity when it denied awarding medals to those killed and injured by Nidal Hasan in the Ft. Hood massacre. Of course the DOD has denied the Purple Heart to others in the past, but never in an effort to protect the “rights” of our enemies.

The outrage of Ft. Hood culminated with Nidal Hasan yelling “Allah Akbar” as he slaughtered our unarmed troops, deeming them to be enemies of his state. However, the massacre’s roots were growing well before the infamous November 2009 attack. Nidal Hasan was promoted up the ladder to the rank of Major with full knowledge of his terrorist ideologies – making those who turned their heads the other way in the interest of political correctness accessories to the crime. They could have stopped the tragedy well before it came to fruition. They did not. And now the politically correct police continue to exercise their assaults upon the victims and the victim’s families by refusing to label Hasan a terrorist.

Whom does the Department of Defense call a terrorist?

Then-Captain Nidal Hasan at the Uniformed Services University of the Health Sciences, Department of Defense

Let me ask this: what exactly does one have to do in these United States to be labeled a terrorist?

The Secretary of Homeland Security, Janet Napolitano, doesn’t seem to have any problem calling American citizens who oppose the left’s radical agendas “terrorist.” Unwilling to call a spade a spade, the Department of Defense termed the situation where an ideological killer and hater of Americans walks into a room of unarmed troops and opens fire on them “workplace violence.” So, patriotic and constitutionally minded American citizens are terrorists but maniacs like Hasan deserve every protection under the law before they can be labeled a terrorist – not much different than arguing that enemy combatants at Guantanamo Bay deserve due process. Apparently, it’s harder for a Muslim extremist to be labeled a terrorist than an American citizen. I’m happy to report that some sanity still exists in our government. The Senate released a report describing the mass shooting as “the worst terrorist attack on U.S. soil since September 11, 2001.”

Passage of this legislation could directly and indirectly influence potential court-martial panel members, witnesses, or the chain of command, all of whom exercise a critical role under the Uniform Code of Military Justice (UCMJ). Defense counsel will argue that Major Hasan cannot receive a fair trial because a branch of government has indirectly declared that Major Hasan is a terrorist – that he is criminally culpable.

I have to ask again, what exactly does one have to do in these United States to be labeled a terrorist?

Of course we all need to be protective of our right to a fair trial, but does that include the rights of the victims in a situation where there are numerous eye witnesses and guilt cannot be disputed? We believe in innocent until proven guilty but in this case guilt is not something that needs to be debated. Frankly, I’m tired of hearing about Hasan’s rights! I’m tired about hearing why the trial was delayed because this terrorist refused to shave his beard. I’m tired about hearing why any enemy combatant deserves more respect than the men and women who dedicated their lives to protecting this country. And…I’m outraged that this terrorist is still receiving his Army salary of $6,000/month. Assuming there is still some sanity left in our military court system and Hasan is found guilty, that money and any other monies he has accumulated should be awarded to the victims and/or their families.

Let me be clear, I don’t believe in Kangaroo Courts but I do believe in justice. Unfortunately, it seems that the terrorist in question is receiving unmerited leniency and the heroes are receiving insults. Stretching out the trial this long and refusing to acknowledge the sacrifice our troops made to serve this country is not justice – it’s incomprehensible bigotry fostered upon us by a politically correct administration and its anti-American minions.

There’s no question that those who were killed and wounded in the line of duty deserve our utmost gratitude, including medals of honor, and those in charge of this debacle deserve to be shown the door. Isn’t it bad enough that those in charge allowed this to happen – even when there were numerous signs pointing this way? Now they are adding insult to injury by bending over backwards to protect the rights of a terrorist over the honor rightfully belonging to the victims. Hasan may have been the only one pulling the trigger on that fateful morning but more are culpable than the man with the beard.

Reprinted from The Daily Rant.

I’m betting it’s called listening to the orders of the Commander in Chief. I think he told them WPV and not to let it come back to him.

“There’s no question that those who were killed and wounded in the line of duty deserve our utmost gratitude, including medals of honor”

Oh FFS. If you award medals for this you devalue the whole concept. The US armed forces are already notorious for handing out medals to anyone who demonstrates that they can tie their shoelaces, and you want to make it worse??

The whole point of a medal is that it recognises an extraordinary achievement. Getting shot doesn’t count.

The Purple Heart is awarded to one wounded in battle. And when a nutter opens fire in an Army depot, that is a battle. It doesn’t matter if the enemy is wearing the same uniform as yourself. Or it shouldn’t.

You, a veteran, shock me with that analysis.