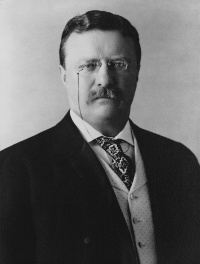 Concerning honoring the office of President, Theodore Roosevelt had this to say:

Was the Obama administration honoring the office?

This last week Attorney General Eric Holder pandered to illegal aliens, calling them “unauthorized immigrants.” Shortly thereafter, Obama went to Mexico pandering to illegals while blaming the American people for the very crimes he and his administration contrived through “Fast and Furious”. I have got to believe that the people in Mexico realize that this man’s administration is personally responsible for the bloodshed of 300 Mexicans. Shortly after Obama’s speech – surprise, surprise – pro-amnesty protesters show up in Dallas, Texas, proclaiming, “Listen, Obama! We’re at war!”

I have been exposing this administration on my radio show for years concerning their criminal conduct.

How do you honor the office?

I once had a radio station manager approach me because I was calling out Obama’s corruption on the air (sonsoflibertyradio.com). He admitted he knows President Obama is “un-American, reckless, ignorant, dangerous, and even corrupt.” And, of course, I agreed with him.

But then he went on to say, “He is still the president of the United States, and we need to honor him and his office as such.”

I said, “Honor him as such? You’ve got to be out of your mind to think that I am going to honor any individual in any office that steps on the sacrifice of our veterans who ratified the Constitution of the United States with their blood.” (Which, by the way, is the same Constitution those in office swear to uphold.)

When America tolerates corruption in government, she dishonors the price veterans paid! I am in fact honoring the office of the president when I point out that which corrupts the office he holds. I will never honor any man or woman in office who disrespects the sacrifice of those who put him or her there. Never. And neither will anyone who is a true American patriot.

On the other hand, I will be the first to stand behind those in office that do honor the veterans and the laws of our republic as put forth in our Constitution.

The following are the number of American casualties in each war listed:

If anything, seeing their sacrifice should show you what not to tolerate in office rather than allowing their bloodshed to be trampled upon.

America, the way to honor the office of the president and his administration is to bring impeachment and civil charges for their crimes against the American people.

Below is what every American should do to honor our veterans. Please keep in mind that these two little men are 5 and 7 years old:


What does freedom cost America?

Related Topics:libertypoliticianspresidentsecond amendment
Up Next