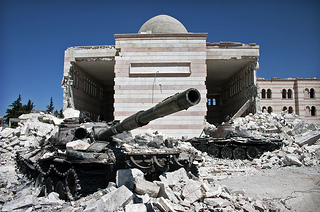 As we awoke early this Friday morning and the premature chill of autumn air settled in, it carried with it a new, yet so very old foreboding. Once again the American people sit in the fictitious safety of our quiet, tiny part of the world, the fresh brewed coffee warming our hands, but doing little to soothe our anxiety.

Abidingly we waited to hear from the pompous, elitist, war mongering so called leaders of the world as they decide to, for about the 50th time in as many years, have America supply cash, arms and American blood to fight their battles for them. (Editor’s note: as of this writing, the United Kingdom declined to participate, though France did not so decline. At 3:00 p.m. EDT, Obama said “I have made no decision.”)

When Obama, the first truly ineligible and incompetent person to ever pose as America’s leader first snatched the reigns of power, his message to the world was simple. America was evil. America was arrogant. America meddles. And he, the righter of wrongs, the savior of man, was about to change that and the world. He was about to dislodge the hate and replace it with love, warmth and universal enchantment.

At least that’s what he promised. However, let’s review what he has delivered:

This is just a small sample of the “good” he has accomplished in just 5 short years and does not include the destruction he has wrought on the economy and American cohesiveness. God only knows what other great and wonderful things he has in store for us.

Obama will not attack Syria

Having said all of the above, TPATH predicts that Obomba will not fire those missiles at Syrian targets. Not because he cares about innocent life or starting a major Middle East conflict. He, as always, is only concerned about Barry Soetoro. Oh yeah, when he addresses the American people to announce he has decided not to fire on Syria he will hand out his normal deceitful pabulum about this, that and the other thing. But what he won’t tell you is that even his own party will finally turn on him, and some have already.

Yes for the short term, but Obomba’s complete incompetence has made laughing-stocks to world leaders, friend and foe alike, not only him but also, by extension, America. In this dangerous and aggressive world, only bad things are in store. Of that you can be certain.

As we have all been told, Russia and China have threatened Obomba and the West if action is taken in the form of military activity against Sirya. While this may have intimidated him to some extent, there really is no danger of a Russian or Chinese confrontation. China has way too much to lose in trade with the US and Russia would not risk all out war with the West over a little piss ant country like Libya.

Russia and China are only engaged in what they always engage in. That is causing trouble for America, whenever and however they can. And this Obomba guy? Well he makes it just too much fun and way too easy.

This does not mean all is swell in the Middle East. It is not. It is a powder keg and the fuse has been lit by forces of hate and the ever-growing maladroitness of Obomba and the ineptness of those in his felonious administration.

Over the decades America has not only been a haven for her citizens and a beacon of freedom and hope for others around the world but her strength and morality has helped to keep despots under control and from time to time, at great sacrifice, she has removed the most egregious and murderous. For the sake of the world, mankind and prosperity, I have always supported that mission.

Not anymore. Things have changed. America has tried, but the reality of the world has changed. The world has become a nightmare of murder, mayhem and bloodshed as a result of Islamic terrorism. Islamists can not be cajoled, bargained with or softened. For them there is but one goal; death to all but Muslims. How do we know this? They tell us and murder us every single day.

What has been our response thus far? Why, we let them into our country, into our towns and into our neighborhoods. We let them build Mosques and training camps by the thousands all across our country where they practice their hatred and prepare to kill us. And while they grow and expand, we the tax payers foot the bill by allowing them to pay none.

Many years ago now, before this so called religion was understood by George Bush for what it actually was, he saw the growing threat of Islamic radicalism and thought it could be stopped with democracy. His plan, if you will, was to help the Iraqi people free themselves from a dictator, help them form a democracy which would flourish and grow. The concept was that other Islamic countries would see the great life and prosperity brought to them by democracy and freedom and then, one at a time, terrorist regimes would fall like dominoes and presto, no more terrorism.

The plan understood that many years would be required to change the Middle East but what it did fail to understand is that Muslims do not and never will care about life or freedom. They live their lives for the privilege of dying for Allah and taking as many infidels with them as possible.

It is long past time to change how we look at the Middles East and our policies towards it.

The policy America should take and the steps needed to implement it.

This new policy will be based upon fear of us and containment of them. The days of bartering with those who want us dead are over.

It will be effective.

It will only have to be implemented once.

What will be your fate America?

Excellent commentary! And, may I suggest 3 other solution mandates?

1) Deport all Muslims from the United States if they do not renounce their Mosques and false god, “Allah.”

2) Have the US Military raid all Muslim training camps within the United States and confiscate the properties.

So Nathan, Deportation of all Muslims unless they convert from their Muslim faith. That doesn’t seem like a very American thing to do.

Islam isn’t a faith. It is a political ideology, and a nationalistic one, in religious dress.

Since I know of no translation engine that produces a transliterated response, I cannot print how you say “Our Struggle” in Arabic. But that is how the Koran should have been titled.

Conservapedia describes Islam as, “..a monotheistic Abrahamic religion based on the teachings of Muhammad…”
So again, the commenter is suggesting we deport those who believe in a faith that he doesn’t agree with. He is also asking they renounce their “false god.” Since when is it up the government to determine who’s god is false.

It might be up to the government to spot a religious movement that calls on its followers to commit murder and treason.

Great thoughts Nathan! While we’re at it:
1). Impliment a national religion, obviously a form of protestantism.
2). criminalize worshipping false idols, such as the pope.
3). Burn all non protestant houses of worship
4)…
5). profit!

Seriously, So many muslims are American citizens and thus can’t be deported….I wonder if you guys have actually ever met a muslim. Could do you some good to open your minds a bit.

Oh well. Your generation will be replaced. The millennials are easily the best generation.