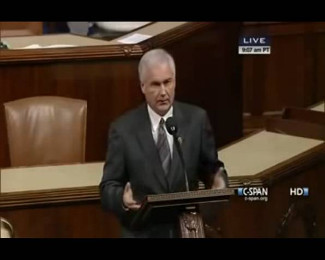 We complain that our elected officials do not represent us. Sometimes that is because they do not see the problem in the same light we do and sometimes it is because their own self interest – getting elected – seems to take precedence. But what should we do when one of them gets up on the House floor and says we cannot save you, it is time for you to save yourselves?

You see, our form of government only works when all branches acknowledge the authority of and their responsibility under the Constitution of the United States. If one branch or another thumbs their nose at the Constitution what are the others to do?  The House of Representatives has the power to subpoena. They can call officials to answer for their activities but what if they are called and do not come or if they do come and simply lie or refuse to answer under this or that pretense? What if one branch just refuses to do their Constitutional duty as the Executive branch under Obama has done? What if the various department heads of the Executive Branch, which includes the Department of Justice, simply decide to stick together in ignoring the Constitution and also ignore any and all attempts by other branches to hold them accountable. Suppose they even defied the courts.

Though no one has yet had the courage to declare the truth of the situation, we have a Constitutional crisis with regard to the national debt and the budget in this country. We have had no real budget in years. The Executive has sent budgets but even his own party will not bring them up for a vote because the money he requests is way outside what is justifiable or affordable. His own party members know that if they attach their names to his budget they will never get elected again so they refuse to discuss it but most Democrats will do nothing to actually restrain spending or to protect their constituents.

As things currently stand there has been a coup. The Executive Branch has, with the help of some in the Senate, taken control of our Federal Government and there is no one left to protect us.  The Republicans in the House of Representatives should be hopping mad and on the move to assert their authority but when faced with the Executive Branch’s lies they back down and acquiesce to the demands of the Executive who spins things to appear as though Republicans in the House are the cause of the impasse when actually it is he. The impasse exists because the House Republicans refuse to let the President bankrupt the country while he refuses to budge unless they let him do exactly that. 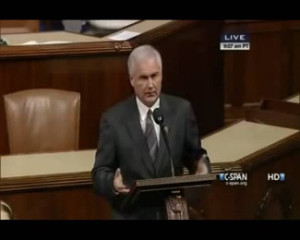 Representative Tom McClintock (R-Calif.) offered a opinion that the public should rise up. Photo: screencap from C-SPAN.

One member of the House, Representative Tom McClintock (R-CA),  has had the courage to stand up and tell us we are wasting our time if we are waiting for that body to do something to protect us. Maybe he is admitting what the others do not have the courage to say; that they cannot do this alone.  He has told us that we, the interested public, must band together as the veterans did when they took down the “Barrycades” at the WWII memorial.  Perhaps it is time to ask our representatives what we can do to help them help us.  No, we are not going to send more money we need action!

The time has come for the public to do whatever is peacefully possible to stop the takeover of the United States of America by a crew of hijackers that is frighteningly close to successfully transforming our republic into a socialist state complete with national police force and a Gestapo like organization now known as the IRS. Step one should be for everyone to write to their members of Congress and simply say that we will back you up in any way they want but the time to assert their power is now. We cannot allow this lawlessness to proceed any further. If Congress still refuses to take concrete action then acts of civil disobedience up to and including a general strike would be in order.   With every passing day our options are diminishing.  “Let’s roll.”