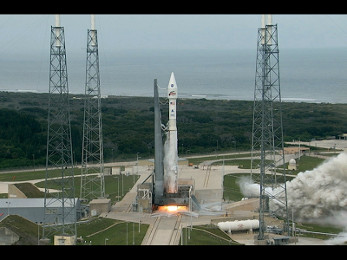 Yesterday, NASA launched its latest deep-space rocket probe: MAVEN. MAVEN, unlike Curiosity and other earlier missions, will study the atmosphere of Mars, not its ground. NASA hopes MAVEN will help them explain how Mars once held a lot of water (or water flowing very fast), and where that water went. NASA’s spokespeople say they want to know how Mars went from warm and wet to cold and dry in a billion or so years. But the problem isn’t with any process. The problem is with the first conditions. 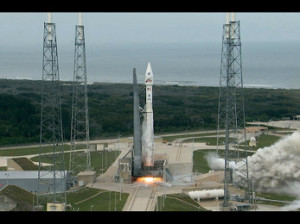 MAVEN stands for Mars Atmosphere and Volatile EvolutioN. The MAVEN probe launched yesterday at 1:28 p.m. EST. (Link from NASA.) MAVEN should reach Mars by September of next year.

MAVEN will never land. Instead MAVEN will go into a highly eccentric orbit around Mars. That orbit will take MAVEN into Mars’ upper atmosphere. NASA designed that orbit on purpose. MAVEN will sample the atmosphere and gather evidence to show:

(See these reports from ABC News and Fox News Channel.)

The problem of water on Mars

Scientists know this much about Mars: liquid water did flow on it. Mars either had a lot of water, or a relatively small amount flowing at high speed. One year ago, the Curiosity rover found clays. Clays need water to form. Mars also has other features that look like gullies on Earth. Gullies form when liquid water flows fast enough to erode the ground.

Gullies on Mars. Comets could have made such gullies, after melting from the impact. From Brown WT, In the Beginning: Compelling Evidence for Creation and the Flood.

Where is this water? Recently, Curiosity found minerals holding water bound within them. But how did the water stay in place long enough for such binding?

The air on Mars is very thin. Its pressure averages less than 0.6 percent of the pressure at sea level on Earth. (It is also less than a tenth of the minimum pressure at which water will boil inside a human being’s bloodstream. This is Armstrong’s limit, below which no human being can survive.) Even at the lowest place on Mars, the atmospheric pressure rises to only one percent of Earth’s. So any liquid water on Mars today would never last. It would sublimate away.

Walter T. Brown, of the Center for Scientific Creation, explained the problem. Today he said:

They [NASA] have a lot of questions in their minds, and they’re hiding them. And one of those questions is: how can [you have] water on Mars? The pressure on Mars is so low, and the temperature is so cold. So where did the water go? So they’re in a mess.

He further described the problem:

In the [low-pressure] atmosphere [on Mars], water would go “poof!” And yet we see evidence of…a lot of [erosion]. We see [what looks like] water dripping out of the walls of craters from season to season.

In short, a contradiction. And the larger problem is: how did the water arrive, and stay long enough to make those signs?

I wrote the editor of Science fifteen years ago. I asked him, “Why are you working on all those crazy ideas to explain how liquid water could be on Mars? You’re [mainly] looking at the water coming out from below Mars’ surface. Why not [use] the easier solution? It came from above the surface!” I never got a response.

Brown explained yet again what he meant: “It was comets!” Specifically, many comets fell to Mars at once. These dirty snowballs melted from the heat of impact. The melt carved the gullies and made the clays Curiosity found.

The mass of a comet [is] about 1016 grams. That’s just about right for what everyone estimates the mass flow rate to be.

Why won’t NASA and other scientists accept this idea? Brown wouldn’t say directly. He did mention more evidence for a comet bombardment: heavy water. Much of the bound water on Mars is heavy water. (Brown mentioned that light water, having the light isotope of hydrogen, would sublimate away first.) Astronomers have known since 1998 that comets have 20 times as much heavy water for their mass as do the gas giants and most other objects.

In his interview today, Brown dropped a hint. The comets, he said, must have come from a source of water that absorbed a lot of neutrons. What might that source have been? Brown gives the answer in his book, In the Beginning: Compelling Evidence for Creation and the Flood. Specifically: an ocean beneath the earth’s crust broke free about fifty-three hundred years ago. That provoked tremendous earthquakes. Those quakes deformed the quartz in the crust. That turned the earth into a powerful electric generator. Powerful enough to form the radioactive elements. And in so doing, it made what Brown called “a sea of neutrons.”

The subcrustal water absorbed those neutrons. It then escaped into space, and formed part of the comets and even the asteroids.

Conventional astronomers resist this explanation, if they even know about it. How, they ask, could any natural process launch so much water into space fast enough to escape the Earth? But they have never tried to explain it any other way.

Comet ISON is alive – and has come back

Texas textbooks: the creation side

[…] MAVEN and NASA’s inconvenient truth Go to this article […]