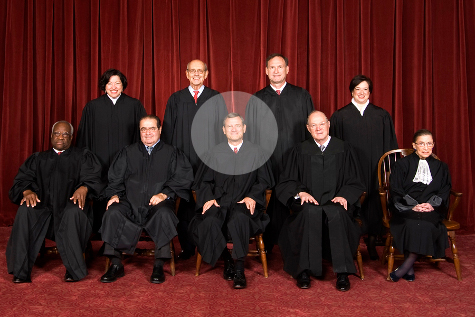 In the news this past week there have been reports about the Supreme Court getting another chance to do the right thing concerning the unconstitutional “Un-Affordable Health Care Act”, previously known as ObamaCare. This latest suit relates to the infringement of religious rights of owners of businesses.  But don’t get yourself too worked up thinking that there is any possibility that the American people will be saved from this mess.  They won’t be.  Oh, some part of the law may be struck down in this instance, but there is zero chance of anything happening beyond that. The NSA’s mining, storage and compilation of data on American citizens, including Supreme Court Justices, is in full action mode and is accessible to every criminal working for Obama. And as long as those people who have sworn an oath to preserve and protect the Constitution are more concerned with preserving and protecting their own sorry, cowardly backsides, our country and our freedoms remain in peril.

A different kind of oath keeper

Let’s switch gears here for just a second. Politicians, judges, justices and presidents are not the only people who take oaths to their country.  There is a much, much larger group who’s members do the same.  The difference is, this group not only takes the oath, they value it and they honor it.  This group, of course, is comprised of the brave men and women who serve in our military. Though and because Obama is President and a Media darling, you hear nothing of our young people, who everyday, are dying or losing arms and legs as they honor the promise they made to their county.  The thanks they get from most of us is honest and authentic.  But conversely the abuse they must endure as pawns in the political games which are played with them and their families, by cowards and liars, none of whom have an ounce of personal courage or integrity, will loom in the annals of history as the disgusting exploitation it is. While our military heroes are sacrificing life and limb, what have our so called leaders, judges and justices been doing?  Almost to a man (and that word is applied here very loosely), they have been cowering in their private offices and trembling in their black robes, forsaking not only their country, their Constitution and their oaths, but too, the very essence of their own character. During these past several years, as the evidence has mounted as to forgeries, criminal use of Social Security numbers, falsified Selective Service documentation, missing or deleted government records, millions spent hiding birth documents, no judge, attorney general or Supreme Court Justice has even considered putting the country ahead of their own personal future and prosperity.

Try to imagine what this country would be like if our soldiers emulated our politicians.

Returning now to the “Un-affordable Care Act” that could have been stopped in its tracks by one man. It would have required some courage.  But that one person clearly showed he had none.  That person, Justice John Roberts, disgraced his oath and his manhood when he decided to throw the entire country into the cauldrons of irreversible government tyranny and eventual economic collapse, in order to save his seat on the Court.  Soldiers give their lives, legs and arms to save a little part of our freedom.  And….

Roberts threw the entire country overboard for his own well being.

The main stream media has worked diligently and will continue to do so to keep Roberts’ secret from becoming common knowledge.  The House and the Senate will continue to ignore it, as will the United States Attorney General, provided Justice Roberts plays ball.

So what is this secret?  What has and is being held over his head?  It appears that Justice Roberts may have broken international laws as well as United States laws and possibly laws of one or two Latin American countries as well.  The word “appears” is used here because there have been no convictions relating to this and there never will be as long as Roberts does what he’s told. The information that TPATH has found relates to illegal transportation of children, a boy and a girl, from one foreign country to another for the purpose of clandestinely adopting them. The adoption appears to have been finalized in a Latin American country after secreting the children there and out of Ireland.  All adoptions in Ireland must go through the government and non-citizens are forbidden from adopting. These children are now, the almost grown children of Justice Roberts. The number of  crimes which needed to be perpetrated for this scheme to be accomplished are numerous and while America has Statutes of Limitations which may have run out, it’s very possible that Ireland might still be in the position to extradite, prosecute and even convict.  There is also the potential “citizenship” issue relating to the children.  If they were illegally removed from Ireland, their American citizenship could be impacted.   Not that Roberts, our congress or the usurper has any particular problem with citizenship issues. As this case is being heard don’t let the idea that right will prevail.  It will not.  There have been no signs that Roberts has grown a pair of anything under those robes since he last deserted his country. Reprinted from Tea Party Advocacy Tracking Hub Warning from TPATH:  As many of us have heard the Un-affordable Care Act website has been hacked and many people are giving personal information to criminals (criminals not working for Obama that is).  TPATH has discovered a sure fire way of telling if you are on a pirate website.  If it is operational, it can’t be Obama’s site, exit immediately.

Living in the Twilight Zone?

This is not my Supreme Court, nor is it yours. | ofthehighest

The justices of the U.S. Supreme Court and judges in other U.S. courts are to be held accountable under our Constitution. | ofthehighest