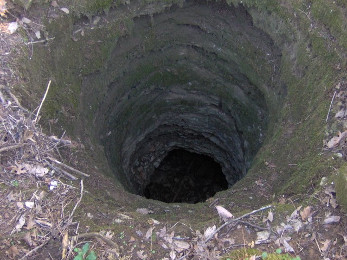 Sinkholes seem to be a growing trend nationwide and worldwide. The last 24 hours has seen reports of two fresh sinkholes. One, latest in a series, opened in Palmyra, Pa., late on December 18. In Jersey City, N.J., another opened that same afternoon after a water-main break.

These events only made the local news. Sinkholes make national news when they grow large enough to swallow a house, or larger. Or when they kill someone. Experts can’t seem to agree on what causes them. Some blame different sinkholes on different causes. They cite new construction, leaky water pipes, rapid drought-and-rain cycles, acidic groundwater, or loose soil, depending on the local clues. Self-described survivalist Michael Snyder suggests something else might be at work: a breakdown of the earth’s crust.

Sinkholes not only in America 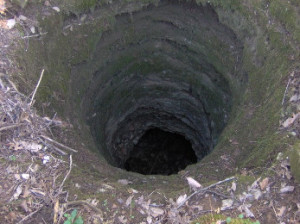 Sinkholes do not happen only in America. They’ve developed in Guatemala, Venezuela, and China, to name only three places.

As the US Geological Survey points out, most sinkholes happen over limestone and other porous rock.

A sinkhole is an area of ground that has no natural external surface drainage–when it rains, all of the water stays inside the sinkhole and typically drains into the subsurface. Sinkholes can vary from a few feet to hundreds of acres and from less than 1 to more than 100 feet deep. Some are shaped like shallow bowls or saucers whereas others have vertical walls; some hold water and form natural ponds. Typically, sinkholes form so slowly that little change is noticeable, but they can form suddenly when a collapse occurs. Such a collapse can have a dramatic effect if it occurs in an urban setting.

“A dramatic effect” puts it mildly, especially when someone dies. The main point here is: we hear about sinkholes when they collapse suddenly, underneath a house, building, or street.

So what does make sinkholes appear?

Cracks in the crust

Snyder might be closest to the truth: something is wrong with the earth’s crust. He suggests the crust is suddenly becoming less stable than it has been. But creation science has the real answer. Which is: the Global Flood left the earth’s crust less than stable. Failures like sinkholes were inevitable. And now we see them.

Walter T. Brown, of the Center for Scientific Creation, explained it to CNAV in an e-mail yesterday:

Sinkholes, as I think every geologist will agree, begins with a vertical crack which draining ground water widens.  The wider the crack gets, the more ground water will drain through it, so the faster it will grow–especially in moist climates.  Usually one spot along the crack widens first, so the void grows in one spot and eventually forms a sink hole – not a sink “line.”  The problem is severe when the crack penetrates soluble minerals, such as limestone.  Florida, with all its underlying limestone, is especially vulnerable.

The problem, as Brown explained, is: “the earth’s crust is laced with cracks.” Friction and pressure lock most of these, so they do not cause earthquakes. But groundwater can still seep along them. These cracks started forming with the Global Flood:

Vertical movements in the crust were the rule during and the centuries after the flood, so many cracks formed in and below the earth’s surface – more than we will ever know. The flood produced lineaments and isostatic shifts up and down due to the depositing of more than a mile thick layer of sediments. About 20% of those sediments are limestone that was produced in the subterranean chamber before the flood and expelled during the flood. Limestone is especially soluble, as anyone who has gone into a deep caverns will see. The cracks through limestone deposits look like a dense spider web when seen in two dimensions.

Florida has a lot of limestone beneath it, and so is more vulnerable than most places. Brown said further:

Because the flood occurred [about five thousand years ago], we should not be surprised that these sinkhole effects are starting to come home to roost.  If the earth and its crust is billions of years old, no one would ever consider this possibility.  Accelerating factors are the buildup of CO2 in the atmosphere which in turn contributes to acid rain that is a potent solvent.  Also more and more heavy construction contributes to the collapse of sinkholes.

So those experts also have part of the truth. Herein lies the real hazard of CO2 buildup in the atmosphere: acid rain. It dissolves limestone and other minerals, widens those cracks in the crust, and makes sinkholes more likely. That also explains the Chinese problem. China has built many more coal-fired power plants in recent decades. Could they be opening up the problems that have swallowed up so many villages?

Brown suggests a slow and steady trend in sinkholes would support his theory. He recommends the USGS look into electrical and other techniques to find cracks in the ground and watch them grow. Presumably, with such techniques, they could spot a crack that might widen into a sinkhole.

More to the point, the sinkholes raise a serious doubt about the age of the earth. Men like Snyder ask whether the earth’s crust is becoming unstable. That alone violates uniformitarianism. Is the present no longer the key to the past? Is something happening today that hasn’t happened in a billion years? Yes, and yes. The past is the key to the present, not the other way around. The processes that form sinkholes today, began five thousand years ago. Human beings are speeding that up today, but they did not start it recently. Nor can the process have lasted for much longer than five thousand years.

Christ – Lord of time and all creation

Comet ISON is alive – and has come back

Sinkholes: another effect of the Flood? | Creation Science Hall of Fame