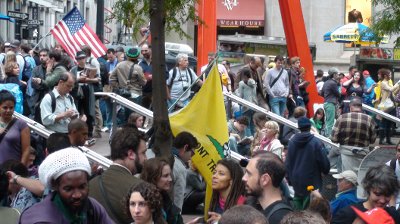 The question in a recent email asked, “Do you know how to catch a large herd of wild pigs?” And, thinking that it was just another silly pig joke, I read on.

How to catch a herd of wild pigs

You catch a big herd of wild pigs by finding a suitable place in the woods and leave corn out on the ground. Once the pigs find it, they will come back every day to fill their bellies with the free food. You have to make sure to put out enough corn for all the pigs that show up, so there will be no fighting over the corn and each pig gets its fair share. Then after a short period of time you begin to build a fence on one side of the area at a time, far enough away from the food so as not to ‘distract’ the pigs whilst they eat, remembering to lay out enough corn for all the pigs that show up every day. The wild pigs get so used to eating the corn laid-out-on-the-ground-for-them that the majority of them will not realize that the fence is now built around all four sides of their feeding area – with a gate. Almost all of them blindly pass through the near invisible gate to get inside the now completely fenced in area. Then, when the right day comes and all the pigs in the herd are in the fenced in area happily eating their corn, you slam the gate closed and catch the entire herd. As you knew all along, this was not some silly pig joke. And, then…

Suddenly, the once wild pigs realize they have lost their freedom and begin to panic and run frantically around attacking the fence trying to knock it down; the same fence/gate that only a few had bothered to notice as they passed through just minutes before. Some tried recklessly digging their way to freedom; others screamed hysterically and ran wild, fights soon broke out, a number of pigs who were unable to defend themselves were slaughtered in the melee. But then, after a prolonged period of conflict, the exhausted pigs decided that maybe things were not that bad, at least they still had their free corn. And, so they ‘licked-their-wounds’, both physically and figuratively, and went back to eating the only thing they still had – free food.

At the end of the day, we now have this large herd of once wild pigs that had been accustomed to being free – roaming, hunting, living anywhere they wanted, but now found themselves in captivity. They were so blinded by the opportunity of getting free corn every day without having to do anything for it, that most of them never made an effort to notice, nor were their basic instincts for survival threatened by the fence being built around their seemingly effortless food laid out on the ground for them. As they became more and more accustomed to their-free-food and without even realizing it, they had also lost their will to hunt, forage, or work for their own food, so in the end they simply accepted their captivity in exchange for the free food.

The next obvious but more sinister question one might ask: “Do you know how to reduce the size of the herd of the now captive pigs?” Simple – FEED THEM LESS! And, if the desired reduction is not killed in the food fights, starvation will do it.

This is more than just hypothetically what is happening today in the United States of America. By the way, my herd of wild pigs was used only as a simple parable, and never intended to suggest that any group of American people was as such. The only resemblance might be that both wild animals and we human beings share the same desire to be – free! But, on the other hand, I can guarantee you that a herd of wild pigs is exactly how our criminally corrupt government, owned and operated by a corporate oligarchy of ruling elites, classifies We the People today in America.

Our federal government has been laying out the free corn of socialism and communism in the form of supplemental incomes programs such as welfare, food stamps, section 8 housing, tax credits for unearned income, tax exemptions, subsides to farmers not to plant crops, medicine, drugs, and not to mention our physical fence builders in the Transportation ‘Security’ Administration (TSA), who have literally corralled us off like wild pigs, invaded the most personal and private parts of our bodies as they x-ray, mock, and strip searched us, all under the guise of our safety for the past eleven years. The list is long as we continually lose or trade our freedoms as they add more links of their invisible fence, which is now complete with the gate and all.

The laying out of the free corn or the building of their fence(s) to corral us, did not begin under the regime of the usurper Barry Soetoro aka: Barack Obama, although he has used racism as their greatest device to construct untold sections of the fence in a very short period of time; no the communist plans for impounding America and confiscating our freedoms actually began over a hundred years ago. But, don’t ever lose sight of the fact that Obama was hired – to slam the gate closed. Will you let him?

Schumer, Cuomo, and other fragmenters