Over the past 14 years, in the course of doing more than 350 public high-school presentations across the country in 24 states, my ministry team and I have (without fail) fought on the behalf of a generation that is being subjected to everything and protected from nothing.

We have seen firsthand the effects of what the federal government has been doing on a daily basis through the illegalities of educational schemes it brings forth – in an attempt to implement a “game changer” on a defenseless population behind the backs of the American people. (Read Article 10 of the Bill of Rights.)

At war with God

The only foundation for a useful education in a republic is to be laid in religion. Without this there can be no virtue, and without virtue there can be no liberty; and liberty is the object and life of all republican governments … 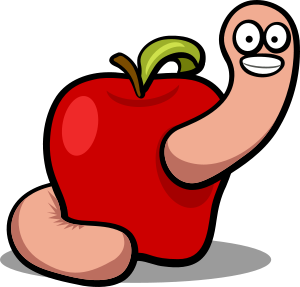 A worm in the apple. From OpenClipart.

We waste so much time and money in punishing crimes, and take so little pains to prevent them. We profess to be republicans, and yet we neglect the only means of establishing and perpetuating our republican forms of government, that is, the universal education of our youth in the principles of Christianity, by means of the Bible; for this divine book, above all others favors that equality among mankind, that respect for just laws.

In complete contradiction to America’s foundational principles, John Dunphy, in his article, “A Religion for a New Age,” said:

How far are they willing to go? As far as you let them go!

America is either going to make this our greatest opportunity in proving our God by putting a stop to these crimes concerning our posterity, or she will be remembered as the greatest disgrace known in history who did not stand on the behalf of her young. There is no in between. Now is our time.

People are destroyed for a lack of knowledge! Know your history.