There’s something about America’s stubborn sense of independence and strong families that forms the bedrock of greatness in this country. The rest of the world does not produce the Thomas Edisons, Bill Gates, or Steve Jobs of the world.

Think of Mark Zuckerberg. As a young man, the Facebook founder developed a computerized intercom that announced patients at his father’s dental practice. The device made it unnecessary to call out the names. Later, the family hired a local programmer to come to the family home to tutor the young prodigy.

The rest is history.

When education is closely connected to the home, great things happen.

We often forget that our children’s education is primarily the responsibility of the parents. We allow tutors, teachers and helpers to assist us — not take over our job. These helpers should be under our direction. When it’s all moved to the far-away utopia of Washington DC, true education has ceased.

A recently published book pictures a more humanized educational structure in the year 2040. In America 3.0: Rebooting American Prosperity in the 21st Century, authors James Bennett and Michael Lotus envision a society in which children enjoy a diversity of educational choices with the use of online learning systems and internet-enabled teachers. This futuristic look is made possible by government reforms involving what’s called follow-the-child funding.

Folks, today’s impersonal and overbearing educational system is only part of the dinosaur-land of huge government and central planning that squelches creativity and the rights of parents. 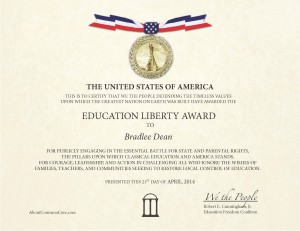 Certificate of the Education Liberty Award, awarded to Bradlee Dean.

One prophet of our day is Bradlee Dean, a long-haired youth minister who for years has urged students to think along the lines of freedom of thought, and of the Biblical and Constitutional foundations of our great country.

Dean has warned parents of the dangers of public (er, government) education, advising homeschooling as a healthy alternative. Recently, he was granted the Education Liberty Award by the group About Common Core, for his willingness to confront the doctrines of this pernicious program via his radio show, speaking engagements and public school talks. Not everyone who speaks out against Common Core gets this award.

In fact, the popular website Freedom Outpost says, “For nearly two decades Dean has been going into the belly of the beast (the government schools) with the message of the gospel of Jesus Christ, the history of America’s Christian heritage and the exaltation of God’s law.”

A Cure for the Common Core

Here’s what others have said about education – and what the common man already knows deep within his heart:

It needs more than ever to be stressed that the best and truest educators are parents under God. The greatest school is the family.

– R.J. Rushdoony, one of the inspirations for the modern Christian homeschooling movement.

Every home is a university and the parents are the teachers.

As regards moral courage, then, it is not so much that the public schools support it feebly, as that they suppress it firmly.

Parents have the first responsibility for the education of their children. They bear witness to this responsibility first by creating a home where tenderness, forgiveness, respect, fidelity, and disinterested service are the rule.