Must science always contradict religious tradition to stay valid? What happened to following evidence where it leads? Lawyers for a scientist who lost his job over his work will now ask that in court.

Mark Armitage never sought out controversy. Those who know him readily attest to that. But controversy found him. Now that controversy heads to court. CBS Los Angeles has this secular perspective on the case. They also have one thing other media outlets don’t have: a scanned copy of Mark Armitage’s complaint against California State University Northridge (CSUN), two biology professors, and his immediate supervisor, among others. 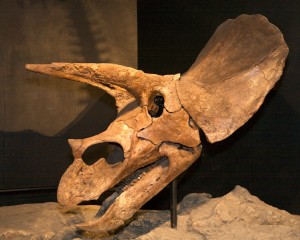 Mr. Armitage, who holds a Master of Science degree, took part in the dig at the Hell Creek Formation near Glendive, Montana. While there he recovered a Triceratops horn, the largest anyone found at that site. Conventional wisdom says Triceratops lived between 68 million and 65 million years ago. But Mr. Armitage found soft tissue and what looked like live osteocytes in that horn. He mentioned and showed that to several students he was training at the time–training on the electron microscope, that is. He asked them to think about how old that bone might be. He seems to have wondered idly whether it might be 4,000 years old, not 65 million years old. (All this, his lawyers put into the complaint, so it is on public record.)

News like that travels fast. In this case, one of those students ran to talk to Dr. Ernest Kwok, the head of the electron-microscopy/confocal committee. Dr. Kwok exploded. On June 12, 2012, he rushed into the EM lab and shouted at Mr. Armitage, “We are not going to tolerate your religion in this Department! This is a science department and we want only science here, not your creationist projects or your religion!”

This worried Mr. Armitage, so he went to talk to William Krohmer, the Technical/Safety Officer (and his direct boss), and Dr. Randy Cohen, the Chairman of Biology. Both men told Mr. Armitage not to worry. But they took no action against Dr. Kwok for his outburst and perhaps found it convenient to forget the whole affair.

But Mr. Armitage did submit his work to Acta Histochemica. On February 12, 2013, they published it. Nowhere does that paper mention religion. It merely mentions fibrillar bone tissues and sheets of never-mineralized osteocytes.

The very day of publication, Dr. Kwok convened the EM/Confocal Committee. He did not invite Mr. Armitage to attend. The agenda: how to get rid of Mr. Armitage. Dr. Kwok ordered all attendees to keep the agenda, the minutes, and even the calling of that meeting secret from Mr. Armitage.

Seven days later, Dr. Krohmer called Mr. Armitage in, told him he was the subject of a “witch hunt,” and advised him to resign. Armitage refused, and Dr. Krohmer told him the school would fire him. Which they did eight days later. So now Mr. Armitage is suing CSUN, Dr. Kwok for having him thrown out, Drs. Krohmer and Cohen for doing nothing to stop it, and CSUN in particular for not bothering to find this out before things got out of hand.

Science and the law

One acquaintance of Armitage’s told the National Creationism Examiner today, “Mark Armitage [does not tend] to throw his religion around.” But the attitude of his former employers at CSUN doesn’t surprise this witness. “He found something radical. They’ll find any reason other than religion to dismiss him for. I will always believe they fired him because he found something that validates his beliefs. But there’ll be a fight, and he’ll have a hard time proving it.”

The acquaintance cited the case of Jet Propulsion Laboratory v. Don Coppage. Coppage was a mission controller at JPL. They fired him after he talked about God on the job. But the acquaintance suggested Mark Armitage’ “hands are cleaner” than those of Coppage. Coppage, the witness said, tended to talk about things other than pure space science. In contrast, Mr. Armitage talked strictly about the science at hand.

Why, then, did Dr. Kwok blow up, barge into the EM lab, and rant and rave? Because Mr. Armitage merely dropped a hint that might be consistent with a religious narrative. He suggested that Triceratops horn might be only about 4000 years old.

(Conventional Biblical scholarship dates the Global Flood at 4400 years ago. But Dr. Walter T. Brown, originator of the Hydroplate Theory, suggests the Flood probably took place about 5300 years ago, with a 100-year margin of error.)

Brad Dacus heads the Pacific Justice Institute. Three of their lawyers are representing Mr. Armitage in this case. Mr. Dacus told this Examiner today: “As a matter of true science, [one should never discard] scientific evidence…merely because it supports a religious belief. And even more importantly, [one should never discard] scientists simply because the evidence they uncover [might support] a religious belief. True science takes [scientific evidence] wherever it may lead. It does not [self-]censor based on hostile parallels to apparent religion.”

One of the three lawyers working the Armitage case for PJI echoed Mr. Dacus’ sentiments. He also confirmed for this Examiner the sequence of events the complaint lays out. He would neither confirm nor deny that Mr. Armitage has witnesses to the intemperate outburst by Dr. Kwok on June 12, 2012 in his lab. (Mr. Armitage’ acquaintance suggests Mr. Armitage will have a much stronger case if he can find witnesses, either to Dr. Kwok’s outburst or to that secret meeting on February 12, 2013.)

The lawyer does not plan to argue Mr. Armitage’s science at trial, during discovery, etc. Nor does he expect the defendants to argue against it. (“No one can dispute Mr. Armitage found osteocytes in a Triceratops horn–though they might argue the significance of that finding.”) He plans to argue the plain language of the California Fair Employment and Housing Act. That law forbids an employer to discriminate against an employee over religious beliefs.