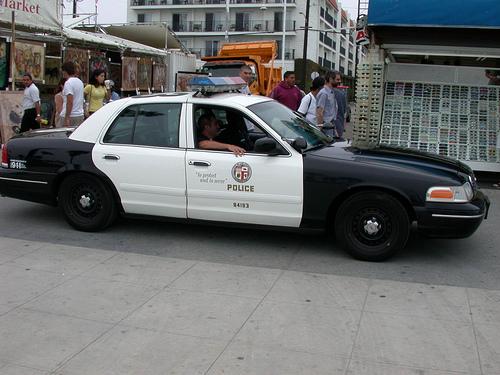 Yesterday Ferguson, Missouri got a new commander-on-the-scene in charge  of policing: Captain Ron Johnson of the Missouri Highway Patrol.  He and Chief Jackson of the Ferguson Police Department released a lot of information today. They must have thought they’d answer everyone’s questions. They thought wrong.

First they finally named the officer who fatally shot eighteen-year-old Michael Brown. His name: Officer Darren Wilson. He has a six-year history in St. Louis County, including two years in Jennings, Missouri and four in Ferguson.

Next they released shocking information about what Michael Brown was doing before Officer Wilson stopped him. Everyone now admits: Michael Brown did some aggravated shoplifting from a convenience store. These event reports and pictures detail the convenience-store case. The reports say this: Michael Brown and another young man named Dorian J. Johnson walked in to a store on West Florissant Avenue. (The police won’t say which.) Inside, Brown picked up a pack of Swisher Sweet Cigars. Price: $48.99. He handed these to Dorian Johnson. A shoving match broke out, but how it came out is not clear. Johnson put the cigars back on the counter. He does not figure in this narrative again.

Brown then picked up another pack of Swishers and started walking out of the store with them. The manager, keys in hand, blocked him at the door. A surveillance camera caught all this on tape. These photos (from Gateway Pundit), from the surveillance footage,l show clearly what happened next. (You can also see them in the PDF file from CNN, but they are less clear.) Brown laid hands on the manager, almost picked him up bodily, and shoved him into a display rack. He turned to leave. But then he turned back and towered over the manager. The surveillance camera had no microphone, so it gives picture, but no sound. We can only guess what Brown said to him. “If you call the cops I’ll kill you”? Maybe. That’s usually the kind of thing a bully says. Whether he means what he says is anyone’s guess.

This afternoon, Chief Jackson of the Ferguson Police (or the Ferguson division of the St. Louis County Police) released the tape and said only he’d been “sitting on it.” That is as lame as can be. Why didn’t he release that tape earlier? The family of Michael Brown now have an attorney. He says Chief Jackson can only have released it to besmirch the character of a dead man. But: he does not deny that Michael Brown did this deed. No one does.

What did Brown do next? The officer (still not named) who investigated the “robbery” (again, make that aggravated shoplifting) at the store says he never caught sight of any suspect.

But, so it seems, Brown started walking down a street, in the middle of the road. Of course he forced traffic to drive around him if they could.

Officer Wilson (who evidently is white), still answering a call for a sick citizen, caught sight of Brown and one other man walking in the middle of the road. He told them to get to the sidewalk. They didn’t obey. So Wilson opened his door, but it bounced off the two men. What happened next is still in dispute.

Wilson also checked into a hospital that day, with a swollen and bruised face. How did that happen?

Another point of dispute: the Brown family attorney insists Brown put both his hands in the air. And still Wilson put eight rounds into him. The police say otherwise.

Questions the new information does not answer

Did Brown take eight rounds, or however many, when he was thirty-five feet from Wilson’s vehicle, or didn’t he?

Did Brown have both hands in the air, or didn’t he? (The witnesses who say he did, are not exactly disinterested.)

Why did the Ferguson Police Department (or Division) wait so long to release that surveillance footage?

Why did St. Louis County put in to get Mine-Resistant Ambush-Protected Armored Personnel Carriers from the Pentagon? And for that matter, why is the Pentagon giving that surplus hardware away free? Yes, that program goes back to the Bush administration. That makes it no less questionable.

What was going through Officer Wilson’s mind? That might be up to a court to decide. But mightn’t it have been the same thing that prompted a brother officer, during the week just past, to say, “Bring it! All you…animals! Bring it!” to an angry Ferguson crowd? Something about that hardware maybe brings out the worst in people. And seeing that hardware would infuriate the Ferguson residents more.

Now, at last, Members of Congress are taking notice. Senator Rand Paul (R-Ky.) openly questions the over-militarization of police agencies all over the country.