Who do men say that I The Son of Man am? And they said, Some say that thou art John the Baptist (He who pointed his finger at King Herod for all of the evils in which he had done, Luke 3:19); some Elijah (He who confronted the King Ahab and Jezebel, 1 Kings 18:17); and others Jeremiah (He who was sent to warn the Kings, Priests, as well as the people to turn back to God, Jeremiah 1:10) or one of the prophets.

It is interesting to note that big corporations in America will hire out troubleshooters to spot the problems within their companies to remove obstacles that stand in the way of the growth of their businesses. Yet, in America today, both the church and the government, which merely reflect the people, will have nothing to do with such troubleshooters when it comes to being corrected in the face of a just and holy God (Deuteronomy 32:5).

Why listen to prophets? 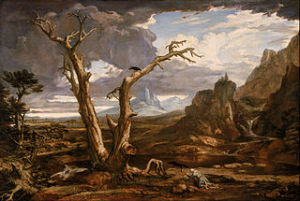 Why should America listen to “Repent, for the kingdom of Heaven is at hand” (Matthew 3:2)? She has nothing to repent for! In America’s imagination, she feels that she has been delivered to do what she wills without the rule of God’s government.

In truth, the American people have turned on their Liberator only to fall into the pit they have dug through their purposed and willful acts of lawlessness.

They that observe lying vanities forsake their own mercies, and the American people have forsaken mercy to their own demise (Jonah 2:8, Jeremiah 7:28).

Liberty is not the right to do what one wants

Liberty is the right to do what the Law permits – a Law Christ fulfills (Romans 7:22-25) in order to liberate from sin (Titus 3:4), that you might be quickened by grace to be saved (Ephesians 2:1) through faith and that not of yourselves knowing that it is a gift from God (Ephesians 2:8).

America is not at liberty to sin and expect to remain free. Sin brings forth bondage (John 8:34) and in the end death (Romans 6:23). That death is both for the individual and also for a nation.

America, do not be like those of old who failed to learn from the history of those who departed from the living God only to find that He meant what He said, for it is written (Psalm 119:89).

A warning from Jesus

And if you still want to remain in denial or remain obstinate to God’s Word and feel that you need to tempt God through your willful transgressions, do remember what Jesus, the Light of men, said to those who refused His truth as He was walking to Calvary to be crucified:

And there followed him a great company of people, and of women, which also bewailed and lamented him. But Jesus turning unto them said, Daughters of Jerusalem, weep not for me, but weep for yourselves, and for your children. For, behold, the days are coming, in the which they shall say, Blessed are the barren, and the wombs that never bare, and the paps which never gave suck. Then shall they begin to say to the mountains, Fall on us; and to the hills, Cover us. For if they do these things in a green tree, what shall be done in the dry?

Why did Christ say these things? It was because they received not the love of the truth (2 Thessalonians 2:10)!

The heart of the prophet is to reform and protect. Also, keep in mind that they who are sent by Christ are not sent to tell the world that everything is all right. They are sent to slay sin! You still have time to repent (Deuteronomy 30:19; Hebrews 3:8-9).

Why I shake America awake

Hi Terry, No one wants to hear about prophecy, they want to dance around. The Church seem dead to me. Feel good sermonettes. Where are you finding prophecy at now. Agape Zelma

Try a church whose members belong to the Independent Baptist Fellowship of North America.

The enabling grace of God | Disciples of hope