The Nevada case of Mitchell v. City of Henderson still slogs through the Nevada Federal District Court. This case has one unusual feature. It accuses police in two cities of quartering themselves in two private houses without the consent of their owners. This would breach the Third Amendment to the U.S. Constitution, which deals with quartering of soldiers. The defendant city officials say police officers are not soldiers. But the Mitchells actually have a thirty-two-year-old precedent on their side. That case says one need not be an active-duty U.S. armed service member to be a “soldier” under the Constitution.

Paul Dowling at Eagle Rising reviewed the Mitchell case, the thirty-two-year-old precedent, and a case from World War Two, today. Mr. Dowling wanted people to remember to defend all the Amendments of the Bill of Rights. Most people remember and argue about the First, Second, Fourth, and Fifth Amendments, and, less often, the Sixth, Seven, and Eighth. No one thinks about the Third Amendment, though. Because, most of the time, American soldiers, sailors, Marines, airmen, and so on, do not “billet” in other people’s homes. Dowling reminds his readers the government has broken the Third Amendment, and more than once.

The Mitchell case might seem to break new ground. CNAV reviewed that case last year, when Anthony Mitchell, and his father Michael, filed it.

To review: the police in Henderson wanted to “stake out” the Mitchells’ neighbor. They forced the Mitchells (and Anthony Mitchell’s parents) out of their homes, moved in for the time of their stakeout, and helped themselves to whatever was in their refrigerators and pantries. They even arrested Anthony and Michael for obstructing the police. Those charges could not possibly stick, so the city dropped them. But the Mitchells are still suing, on every ground they could possibly cite.

The Third Amendment ground looks thin, but only because no one calls the police “soldiers.” But the police do look like soldiers, and act like them. (See here, here, and here.)

And as Dowling points out, thirty-two years ago, the Second Circuit Court of Appeals said one does not have to be a federal soldier to be a “soldier” under the Third Amendment.

The case of Engblom v. Carey comes from a 1979 strike of New York State prison guards. Governor Hugh Carey called up the New York National Guard to take their places. In the process he threw the striking guards out of their rented apartments and let the Guardsmen stay in them.

In 1982 the Second Circuit ruled the National Guardsmen were indeed soldiers, and rented quarters had the same protection as fully owned single-family houses.

Accordingly we hold that property-based privacy interests protected by the Third Amendment are not limited solely to those arising out of fee simple ownership but extend to those recognized and permitted by society as founded on lawful occupation or possession with a legal right to exclude others.

The court also found the Fourteenth Amendment “incorporates” the Third Amendment as a “privilege and immunity of citizens” that “no State shall make or enforce any law to infringe.” 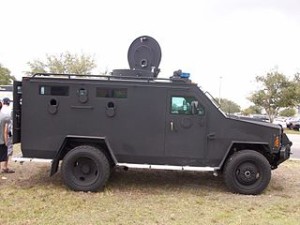 Dowling wants to see a Third Amendment case go all the way to the Supreme Court. That, he reminds us, hasn’t happened yet.

The Mitchell case is most likely to go to the Supreme Court. Unlike the Engblom case, Mitchell began in a federal District Court. It also is a “pure” case. Marianne Engblom and Charles Palmer, the two plaintiffs in that New York case, were prison guards. The apartments at issue were the living quarters they had in the prison. In contrast, the Mitchells are private citizens, and had no contract with the police. And the police used two houses for a stakeout (and an unproductive stakeout, too).

The court could still find against the city on grounds other than the Third Amendment. The food the cops helped themselves to, were “possessions” the cops “unreasonably seized” without even a pretense of a warrant. That’s only one example. But the city must fight the Third Amendment claim. They chose to say “police” are not “soldiers.” And the court has precedent to say they are.

My sympathies are with the Mitchell family, and I hope they prevail. That being said, your interpretation of the Engblom case is rather odd. The main question there was not whether National Guard troops were Third Amendment ‘Soldiers’ – both the district court and the appellate court agreed that they were – but whether or not the prison guards who brought the case could claim that they were ‘tenants’ of the state-owned dorm-style rooms that they rented for a nominal fee on the prison grounds. The district court said that their occupancy was more like a possession incident to employment; the appellate court disagreed and said that the agreement that the guards had with the prison amounted to a lease and that they should be afforded the rights of tenants. One of the three judges disagreed, noting that the occupancy rights were much more restricted than those of a standard lease agreement – the prison administration could enter and search the rooms at any time, and in an ’emergency’ any and all rules of the agreement could be suspended by the prison administration, for example – suggesting that the guards did not have full tenant’s rights to the rooms.

Anyway, it does not speak at all to whether police are ‘soldiers’. It affirms that National Guardsmen are soldiers, but that doesn’t really apply in the _Mitchell_ case.

Still, you have a Circuit Court of Appeals upholding both points of the Third Amendment: one, the Guardsmen are soldiers; and two, the prison guards were leaseholders and had the rights of leaseholders.

It is important to remember that the police are a Militia under the provisions of Amendment 2. The other thing to remember, which many people forget, is that the individual States are sovereign countries, like Canada, Mexico, France, China, etc. The only difference is they created a “super-country” and gave certain power to a central government and retained others to themselves. Cities, Washington DC being under special rules is an exception, are part of the State in which they exist, and therefore the police are part of the State and are in fact soldiers.

Thank you for calling this case back to mind.

The Third Amendment portion of the complaint has been dismissed as of February 2015. The judge held that police officers are not soldiers for the purposes of the Third Amendment; he also expressed doubt that occupying the property for less than 24 hours would constitute ‘quartering’, although he did not specifically rule on that aspect. The case as a whole still proceeds on multiple other complaints, including First and Fourth Amendment grounds.