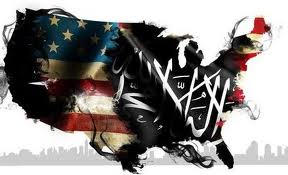 Muslims in America are carrying out prime directive of Islam in the Koran—“Convert or kill all non-believers.”

The New York cop killer was a Muslim

On December 20, 2014, Muslim-American Ismaaiyl Abdullah Brinsley, 28, executed two New York City police officers as they sat in their patrol car.   Brinsley, who spoke Arabic, shot officers Wenjian Liu and Rafael Ramos in the head. Before he shot the police officers, he murdered his girlfriend in Baltimore before driving up to New York City.

On Brinsley’s Facebook page: “Soon shall we cast terror into the hearts of the unbelievers.” Koran Chapter 3 verse 151.

Individual Muslims may show splendid qualities, but the influence of the religion paralyses the social development of those who follow it. No stronger retrograde force exists in the world.

Churchill nailed it. As our Muslim population grows from 7 million in 2014 to a possible 50 million via chain migration by 2050, you may expect our frequencies of Islamic jihad to increase commensurately.

Whether you followed the Fort Dix Six Muslims who attempted to commit mass murder on that U.S. base or the Fort Hood killings by Major Hassan, a Muslim, subway bomb plots by the Denver, Colorado taxi driving Muslim, or the Times Square Muslim last winter, or the Boston Marathon Muslim brother bombers, or the beheadings now continuing at a dizzying pace in our country, you stand eye-witness to America’s demise into a multicultural morass from which we may not recover.

“Immigrants devoted to their own cultures and religions are not influenced by the secular politically correct façade that dominates academia, news-media, entertainment, education, religious and political thinking today,” said James Walsh, former Associate General Counsel of the United States Immigration and Naturalization Service. “They claim the right not to assimilate, and the day is coming when the question will be how can the United States regulate the defiantly unassimilated cultures, religions and mores of foreign lands?  Such immigrants say their traditions trump the U.S. legal system.  Balkanization of the United States has begun.”

That quote by Walsh may be placed on the tombstone of America’s grave if mass immigration continues into this country.

Why do we let it happen?

Why do we allow it to happen? Who continues the madness? When will enough Americans speak up?

In 1865, America’s great satirist-novelist, Mark Twain coined the phrase: “The lie of silent assertion.” In that statement, he exposed the “lie of the day” that slavery couldn’t be talked about in northern states when everyone knew its treachery on African slaves in the South. That “lie” led to the Civil War.

Today, few speak of the “lie” of multiculturalism and the fact that it cannot and does not succeed wherever it’s forced upon Western countries. It’s not succeeding in Canada, Australia, Europe and America. Each country continues importing Muslims that refuse to assimilate into those host countries. Even worse, those immigrants arrive from countries that refuse to be responsible for their birth rates, thus they grow by an excess of 80 million newborns annually that cannot be fed, watered or housed. Therefore, they drain them into first world countries. It looks like this:

In a five minute astoundingly simple yet brilliant video, “Immigration, Poverty, and Gum Balls”, Roy Beck, director of www.numbersusa.ORG, graphically illustrates the impact of overpopulation.  Take five minutes to see for yourself:

Accordingly, the United States expects to legally import over 100,000,000 (million) immigrants within 30 years. They all hold different “world views” that failed them in their home countries. What does their presence do to America? They fragment and fracture our national ethos.

Samuel P. Huntington, in his book, The Clash of Civilizations, said, “It is my hypothesis that the fundamental source of conflict in this new world will not be primarily economic. The great divisions among humankind and the dominating source of conflict will be cultural. Nation-states will remain the most powerful actors in world affairs, but the principal conflicts of global politics will occur between nations and groups of different civilizations. The clash of civilizations will dominate global politics. The fault lines between civilizations will be the battle lines of the future.”

Yet the “Lie of Silent Assertion” continues as if we don’t see what’s happening. None of the major networks addresses it. They report the consequences of it, but never, ever mention the root causes or long-term effects.

Foremost goals among Muslims: to occupy the White House. Secondly, to push Sharia Law onto America. In Barack Obama, they succeeded with a Muslim in the White House. He features 10 Muslim-Americans on his staff. Only time will tell as to voting their Sharia Law into our country. It’s already well on its way in Europe.

Once Muslims gain control in sheer numbers, they overwhelm a host country to implement their own culture. In France today, you see 70 “no go zones” where French police, law and culture surrendered to Sharia Law. Under Sharia Law, women lose all their rights. For example:

A man retains the right to four wives. Mohammed said: “The best Muslims had the largest number of wives,” Bukhari 7.62.7. A Muslim man does not vow loyalty to his bride in the marriage ceremony and the bride must not expect it.

Tell me if that isn’t a “game changer” for American culture!

Muslim women must, under threat of an “honor killing”, abide by Sharia. Rejecting that law stands as grounds for the charge of apostasy, punishable by death. After 14 centuries, Muslim women learned coping mechanisms to avoid Sharia’s wrath. Obama’s advisor on Islamic affairs, Dalia Mujahed, stated that Sharia is “misunderstood.” Muslim women end up as the guardians of their own jails. Muslim wives cover up for the honor killings of their daughters by their husbands or sons.

Islam offers no age limit for marriage of girls under Sharia. A man can pay a dowry and sign a marriage contract with parents of a toddler girl and consummate the marriage at age nine (9). Recent cases in Yemen and Saudi Arabia exposed this tragedy when 8-year-old girls filed for divorce from their over 50-year-old husbands. Not one Muslim authority challenged the Saudi marriage high official, Dr. Ahmad Al Mubi, who stated in 2008, in an interview that aired on LBC TV: “There is no minimal age for entering marriage. The Prophet Muhammad is the model we follow.”

The Prophet raped endless teen girls while chopping off the heads of anyone who disagreed with him.

Our country stands in the cross hairs of a multicultural nightmare bequeathing violence upon us as our Congress and presidents dump another 100 million legal immigrants onto this civilization within 30 years. We need to reduce all immigration to less than 100,000 annually and no more Muslims if we hope to survive the 21st century.

We need to stop it by collectively acting:

“Immigration by the numbers—off the chart” by Roy Beck

This 10 minute demonstration shows Americans the results of unending mass immigration on the quality of life and sustainability for future generations: in a few words, “Mind boggling!”  www.NumbersUSA.org

Most Americans, Canadians, Europeans or Australians along with their elected leaders—fail to understand their predicament: a self-inflected victimization-date with destiny.

What you can do to start a national discussion:

Additionally, I will speak on any TV or radio show in the country with excellent articulation and acumen.  If not now, then who and when?

Robert Siegel at Talk of the Nation: talk@NPR.org

Take action by joining for free:

Part 3: A rabbi speaks of the ultimate conquest of Islam

Related Topics:immigrationislamterrorworld views
Up Next