Instead of sitting down satisfied with the efforts we have already made, which is the wish of our enemies, the necessity of the times, more than ever, calls for our utmost circumspection, deliberation, fortitude, and perseverance.

Friends, can you imagine our forefathers George Washington, John Adams, Thomas Jefferson, James Madison, etc. sitting across the table from the likes of Barack Hussein Obama, Harry Reid, Nancy Pelosi, John Kerry etc.? They would be speaking two different languages, would they not? 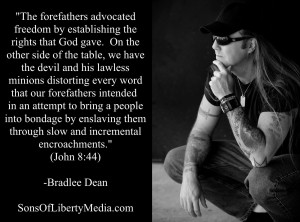 The forefathers advocated freedom by establishing the rights that God gave. On the other side of the table, we have the devil and his lawless minions distorting every word that our forefathers intended in an attempt to bring a people into bondage by enslaving them through slow and incremental encroachments.

Our forefathers would call for a reformation with a call back to the Christian religion and morality, which are the essential pillars of American society!

They would say that this is not the government that they established nor are the current representatives those who will keep a people free and prosperous. They would ask, “Why do the people of America suffer these abuses?”

While the founding documents are still with us, the authors are not. So, I will put myself in their place and ask, why is it that you suffer these abuses, and what it is that ignorance, tolerance and corruption breed?

Ignorance and cowardice in the pulpit

First, the modern-day politician is the fruit of immoral, irresponsible and cowardly pulpits in American churches. If it is not the heretic Joel Osteen wholeheartedly affirming that Barack Hussein Obama is a Christian, then it’s Billy Graham’s grandson, Tullian Tchividjian, claiming that the pulpit is no place to speak on social issues. Incredible! (Luke 3:19)
Those are some inside the Church. But what about those outside the Church?

The fruit of the godless is even more rotten. Just this week, we heard from anti-christ columnist Valerie Tarico who wrote, “Why rape is so intrinsic to religion.” Tarico gratuitously and despicably asserts that God raped Mary. She then pays lip service to a number of mythological stories involving Zeus, Jupiter, Buddha and others before finally zeroing in on the true targets of her sniping: Christ, Mary and God the Father.

In December of last year, anti-theist Preston Smith gave an utterly moronic invocation at a city council meeting in Lake Worth, Florida. This was hands down one of the most twisted invocations I had ever heard or seen. With his incredibly effeminate voice, he offered lip service to Satan, Allah, Buddha, Zeus, and even Jesus, but he didn’t want to hear about damnation or judgment.

In direct contrast, our forefathers established the longest standing Constitution in modern history. They knew who their source was and where they needed to go to get the job done. So they went to their knees (Deuteronomy 8:18).
Reverend Jacob Duche offered the following prayer. It was the first prayer of the Continental Congress at Carpenter’s Hall in Philadelphia, Pennsylvania.

O Lord our Heavenly Father, high and mighty King of kings, and Lord of lords, who dost from thy throne behold all the dwellers on earth and reignest with power supreme and uncontrolled over all the Kingdoms, Empires and Governments; look down in mercy, we beseech Thee, on these our American States, who have fled to Thee from the rod of the oppressor and thrown themselves on Thy gracious protection, desiring to be henceforth dependent only on Thee. To Thee have they appealed for the righteousness of their cause; to Thee do they now look up for that countenance and support, which Thou alone canst give. Take them, therefore, Heavenly Father, under Thy nurturing care; give them wisdom in Council and valor in the field; defeat the malicious designs of our cruel adversaries; convince them of the unrighteousness of their Cause and if they persist in their sanguinary purposes, of own unerring justice, sounding in their hearts, constrain them to drop the weapons of war from their unnerved hands in the day of battle!

Be Thou present, O God of wisdom, and direct the councils of this honorable assembly; enable them to settle things on the best and surest foundation. That the scene of blood may be speedily closed; that order, harmony and peace may be effectually restored, and truth and justice, religion and piety, prevail and flourish amongst the people. Preserve the health of their bodies and vigor of their minds; shower down on them and the millions they here represent, such temporal blessings as Thou seest expedient for them in this world and crown them with everlasting glory in the world to come. All this we ask in the name and through the merits of Jesus Christ, Thy Son and our Savior.
Amen.

An American Duty to Our Nation

A Reading of The Declaration of Independence

You Have 30 Minutes to Explain to the Forefathers what Has Happened to America!

Dwell on the earth…