The sodomites are being used in an attempt to overthrow God’s moral law in hopes of upending the United States Constitution. They are doing this by playing the victims when they are the perpetrators. Inadvertently or purposefully they are being used as a political battering ram to make way for foreign law and its implementation through totalitarian methods. There is no question about it.

Not only do we have the radical Islamists crying that they are victims of “Islamophobia,” but they now go so far as to pin on anyone that does not accept their “doctrine of devils” the label of “haters.” (1 Timothy 4:1)

Where have Islamists learned these systematic methodologies and lessons?

We have even found that recently the radical Muslims who have been taking lessons from their predecessors, the sodomites, have taken it a step further. The radical Muslims have now been exposed for creating their own self-inflicted “Hate crimes.”

A vandalism attack on the Islamic Cultural Center of Fresno on Christmas Day was immediately branded by Fresno Police Chief Jerry Dyer as a “hate crime,” and the “Islamophobia” grievance industry began to gear up in response. Now that a suspect has been arrested, the narrative is quickly collapsing. This video report by KSEE24 describes the damage done to the mosque:

Seven windows were broken and bleach was poured on an American Flag inside of the center. ]But police announced today that the suspect arrested in the attack is 28-year-old Asif Mohammad Khan, who, according to news reports, is a Muslim who used to attend the mosque and did the attack in response to bullying by some in the mosque.

In response, Dyer has quickly had to walk back his knee-jerk “hate crime” talk.

According to the Associated Press:

In the search for a suspect, Fresno Police Chief Jerry Dyer had said that the broken windows and bleach poured on an American flag inside the Islamic center appeared to be a hate crime. On Saturday, Dyer said that investigators interviewed Khan, and their theory has changed. “It was obviously not as we thought,” said Dyer, adding that police will let FBI agents decide whether hate-crime charges are warranted.

Khan confessed, telling officers he was upset with people at the Islamic center for talking down or bullying him, Dyer said.
Remarkably, a member of Khan’s family was allowed to speak at the police news conference to explain his supposed mental illness.

Islamists have learned well from the sodomites.

The American people have, through “tolerance” and “apathy,” allowed God’s moral law to be lowered and by this they have dimmed the light by which these criminals are to perceive their own guilt (Exodus 20, 1 Timothy 1:8-9). By allotting these criminals a pass (because some fell for the deceptive lie that they could not help themselves (Romans 6)), they then want to claim they are exempt from the laws of our Republic, which they are not!

Therefore, the American people have helped open the door to empower these criminals to attack anyone that does not become an ally or an accomplice to commit crimes against nature and against nature’s God (Romans 1:24). This is exactly what the enemies of America have taken notice of. 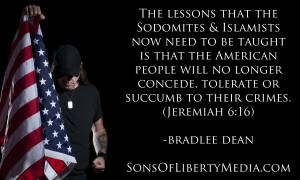 First, the radical sodomites labeled the righteous as “haters.” Then, when the people were awakening to the fact that they were the one’s acting out of hate, they then re-labeled their righteous opposition as “homophobic.” Of course, when that was getting worn out, they began to go to the extreme by creating their own “hate crimes,” inflicting crimes upon themselves. They did this in hopes that someone would believe that they were the victims. Americans have now learned that the opposite is true.

The sodomites hold the shield while perpetuating the crime with the spear!

Kevin Jennings, the forward writer for a book called Queering Elementary Education and founder of GLSEN (Gay, Lesbian and Straight Education Network), has admitted that “bullying” is nothing more than the “affirmation (normalizing) of the gay lifestyle in our education system.”

What the Socialist Media is afraid of…

I have warned America over and over that the radical sodomites are being used as a political battering ram to upend the Constitution of the United States.

Our Constitution was made only for a moral and religious people. It is wholly inadequate to the government of any other.

Without morals a republic cannot subsist any length of time; they therefore who are decrying the Christian religion, whose morality is so sublime and pure (and) which insures to the good eternal happiness, are undermining the solid foundation of morals, the best security for the duration of FREE governments.

– Charles Carroll, a signer of the Declaration of Independence

Oh, that Americans would take heed to God’s Words so that they would not have to suffer the abuses that are taking place in America today.

The lessons that these two groups of criminals now need to be taught is that the American people will no longer concede, tolerate or succumb to their crimes (Jeremiah 6:16)!