The Constitution does not give rights. It protects rights.

A careful reading of the 2nd Amendment clearly shows that it does not give anyone the right to anything. What it does say, in no uncertain terms, is that the right to keep and bear arms (a right assumed to already exist), shall not be tampered with (infringed) by the federal government.

We hold these truths to be self-evident, that all men are created equal, that they are endowed by their Creator with certain unalienable Rights, that among these are Life, Liberty and the pursuit of Happiness.

—The “Declaration of Independence”

Rights come from God, not man 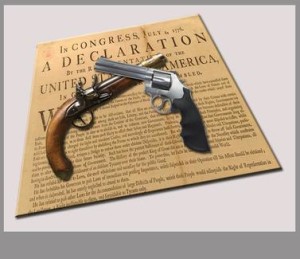 “We the people” received our right to bear arms from the “Declaration of Independence.” More to the point, we received that right (along with others) from God, our Creator. Those rights are unalienable, meaning that they are immutable, abiding and sacrosanct.

According to the “Declaration of Independence,” among our rights are life, liberty, and the pursuit of happiness—but our rights are not restricted to those particular blessings. For example, it stands to reason that “we the people” have the right to defend our liberty. That is why the 2nd Amendment assumes that we already have the right to keep and bear arms, and that is why it tells the federal government to “Back off!”

Borrowing a metaphor from the Bible (Proverbs 25:11), Abraham Lincoln compared the “Declaration of Independence” to a golden apple, and the US Constitution to a silver frame surrounding that apple. The heart and soul of the US Constitution is in the “Declaration of Independence,” and concentrated in the passage from the Declaration quoted above. The source of America’s greatness, and its hope and glory—past, present, and future—is contained in those words. If they know nothing else about our founding documents, every American citizen worthy of the name should at least have those words memorized.

I will close this article in a manner similar to how I opened it. Below is the text of the 1st Amendment—can you find where it gives “we the people” the right to free speech?

Congress shall make no law respecting an establishment of religion, or prohibiting the free exercise thereof; or abridging the freedom of speech, or of the press; or the right of the people peaceably to assemble, and to petition the government for a redress of grievances.

You won’t find it, it is not there. Although the 1st Amendment implies the existence of certain rights, it does not explicitly state what “we the people” can do, as its primary function is to tell the federal government what it cannot do. Are the federal government and federal judges obeying the 1st Amendment? I hope you were not drinking something when you read that question—otherwise you probably sprayed it all over your keyboard.

History and future: face both