The church leaders in America today are responsible for more damage within than any foreign enemy could have inflicted from without.

Just this week, my wife, my four young boys and I have been touring the east coast going through Washington D.C, North Carolina, South Carolina and finally ending up in Virginia. We’ve been speaking at high schools, colleges and churches. We’ve been reaching out to our posterity, who have been subjected to everything and protected from nothing, in an answer to our prayers for The Lord to “send us.” (Isaiah 6:8; Psalm 2:8)

After speaking to our last high school in South Carolina, we were invited to a pastoral conference for lunch. The guest speaker was there talking about his missions over in the Middle East. He was sharing his first-hand experience with the people that Muslims were coming to Christ in droves. He went on to tell the church leaders at this meeting that they were to be bold in Christ (John 7:27) and that there was a huge opportunity for Americans concerning the Muslims as they come into this country (Which I am not advocating). He said that instead of looking at what is going on with the Muslims as a danger, church leaders needed to look at it as an opportunity to win them to Christ. He was right on and I agreed wholeheartedly with him.

Without a second thought, I could not overlook the fact that he was speaking to the same church leaders, along with the parents in this country, who, for the most part, couldn’t care less for their own children in the public school system. The church leaders, if you want to call them that, in this country have proven to be the greatest advocates to those who war against God and His people (Micah 3:5; Jeremiah 23). Furthermore, they have even given their own congregants and children over to be illegally indoctrinated by a godless state.

When church surrenders to government school 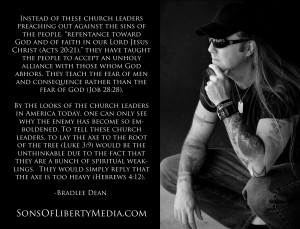 Often, when engaging high school assemblies, we will find up to five churches camped around one school. The students are trying to reconcile the love is that is being preached (John 5:42) to them from the pulpits with their parents throwing them into a cesspool of illegal indoctrination.

The hypocrites have now become the greatest advocates to the radical sodomites, the murdering abortionists, the atheists and placing students in the crosshairs of everything that they can possibly be subjected to.

These are the same church leaders who have refused to speak out against the slow, incremental infiltration of the Muslim’s indoctrination.

Instead of these church leaders preaching out against the sins of the people, “repentance toward God and of faith in our Lord Jesus Christ (Acts 20:21),” they have taught the people to accept an unholy alliance with those whom God abhors. They teach the fear of men and consequence rather than the fear of God (Job 28:28).

By the looks of the church leaders in America today, one can only see why the enemy has become so emboldened. To tell these church leaders to lay the ax to the root of the tree (Luke 3:9) would be the unthinkable due to the fact that they are a bunch of spiritual weaklings. They would simply reply that the ax is too heavy (Hebrews 4:12).

These whores, hirelings and effeminates are not the ones that will get the job done. They are a reproach and an embarrassment to God’s Church.

Instead of them standing up and fighting off the wolves, we find that they are the ones responsible for opening up the gates to the wolves (John 10:10).

I praise God that there are still some faithful among men (Psalm 12:1). The preacher I referenced above was laying down his life in the Middle East to win the Muslims to Christ, and then coming to America to encourage church leaders to do the “stuff” as we say in the ministry.

Yet, with 20 years of ministry experience, I can tell you that preaching to the choir (the church leaders) is preaching to a choir that just does not know how to sing.

Throw down the high places!

Devil in the details

There’s a certain irony about an article claiming that “Church leaders don’t lead” and that they “don’t care” – when it’s written by somebody whose own little hate group was shut down when his staff walked out on him.

If the Southern Poverty Law Center condemns a group, it must be good.