As discussed in Part 1 of this series, it has become my mission to present a counterpoint to what is being taught in high school biology classes in a manner designed to challenge the faith of students. In an effort to accomplish this mission, I will be reviewing the most popular biology book in America, Pearson/Prentice Hall, 2006, Biology, written by Kenneth R. Miller and Joseph S. Levine.

Part 1 focused on Darwinian evolution, which presented the theory with much psychological manipulation and innuendos designed to make the student believe evolution is well-supported by the facts and any other theory is for the mentally challenged. Part 2 will focus on the teachings of the origination of organic molecules, and the misrepresentations and downright lies associated with the Miller-Urey experiment.

Charles Darwin acknowledged the need for a way for organic matter to “evolve” from inorganic matter. In other words, he recognized that there had to be a way for life to evolve from non-life – or a bunch of chemicals. The book tries to address this problem by discussing the Miller-Urey experiment in a way that is both misleading and intellectually dishonest. 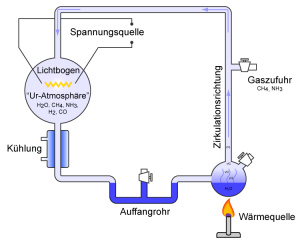 On page 424, in the first two sentences in the section entitled THE FIRST ORGANIC MOLECULES, the problem is accurately presented. The book acknowledges that atoms cannot assemble themselves into living cells, and that the oxygen in our atmosphere would destroy many kinds of organic molecules that are protected within a cell. That’s just about where the honesty ends. The next sentence declares that the early Earth was different – inferring that the atmosphere was different. The first paragraph ends with a sentence: Could organic molecules have evolved under those conditions?

Counterpoint – First, the problem is acknowledged, then the student is cleverly led to believe that the problems we observe today may have not have existed in the past. This is an important assumption, since circumstances would have to have been different in order to support different experimental observations: that the oxygen in our atmosphere would not allow such an evolution to occur.

But is the assumption correct?

In order to circumvent the oxygen problem, evolutionists have proposed that the early atmosphere did not contain oxygen. Then they go on to assume that the oxygen problem would gradually change as primitive life produced oxygen through processes such as photosynthesis. Aside from the fact that geological and paleontological research has revealed that an oxygen-based atmosphere must have existed from the earliest times, the argument is circular at best. In other words, if the presence of oxygen in the early atmosphere would prevent the evolution of life from non-life and the argument is that oxygen would have slowly been produced from primitive life, you should be asking: if you can’t produce life with oxygen in the atmosphere, how can life produce the oxygen? If you’re confused, you should be.

The Miller-Urey experiment: a solution?

Page 424 – presents the Miller-Urey experiment as a possible answer to their dilemma. In this experiment back in the 1950s, Stanley Miller and Harold Urey designed an experiment where they added hydrogen, methane, ammonia, and water to represent the atmosphere of the early Earth. They did NOT add oxygen. Then they passed an electrical current through the mixture to simulate lightening.

The book goes on to say that the results were “spectacular” because the experiment produced several amino acids, which are the building blocks of proteins. Then it declares:

Miller and Urey’s experiments suggested how mixtures of the organic compounds necessary for life could have arisen from simpler compounds present on a primitive Earth.

Page 424 continued – Under Figure 17-8 of the experiment, the book states in an egregiously misleading way (a downright lie, actually):

This and other experiments suggest how simple compounds found on the early Earth could have combined to form the organic compounds needed for life.

It concludes this section by admitting that the simulations used by Miller-Urey were inaccurate but goes on to say:

Perhaps the answer is that the organic compounds that were created over the past 60 some odd years were just as unsuccessful for the origination of life as the experiment in question. What the students do not hear is that the amino acids produced in the experiment were the wrong types of acids to produce life: a racemic mixture, of left-handed and right-handed amino acids, although living things use only the left-handed forms. Furthermore the atmosphere Miller and Urey created was basically irrelevant. And so were the rest of the conditions produced in the experiment.

Here’s another critical question that demands an answer regarding the origination of a cell: If somehow we were able to create in a laboratory experiment a situation where carbohydrates (the sources of energy necessary for life), lipids, and nucleic acids were produced, would we have created a living cell?

Today we know that cells are much more than an assemblage of chemicals. They are complex machines that perform a myriad of functions to produce and sustain life. You see, the question is not whether organic molecules can be synthesized in a laboratory, the question is how can molecules (first inorganic, which then evolve into organic) produce living cells – or how can life evolve from non-life?

Much to the chagrin of many hopeful evolutionists who have had to abandon their Miller-Urey-types of experiments for lack of success, the programming of information into a cell will continue to be their ultimate downfall. For more information on the failure of the Miller-Urey experiment, see a secular opinion at: http://blogs.discovermagazine.com/notrocketscience/2011/03/21/scientists-finish-a-53-year-old-classic-experiment-on-the-origins-of-life/#.VTEwSNLBzGc or a credentialed believer’s opinion at: http://www.truthinscience.org.uk/tis2/index.php/evidence-for-evolution-mainmenu-65/51-the-miller-urey-experiment.html. I also suggest the book “Icons of Evolution” by Jonathan Wells.

After over a half of a century of experimentation, evolutionists still can’t create the right types of proteins in the right conditions to produce life, never mind trying to figure out how genetic codes are created. But somehow – someway – they manage to present their failures to our children in a manner that makes them seem credible. However, it is the responsibility of parents to teach truth to their children. Somehow – someway – we have delegated that responsibility to strangers, and then we are surprised by the strange ideas that our children have been indoctrinated into believing. Hence, this series is being written to assist parents in teaching the truth. Hopefully, they will do just that – for if they do, the truth will most definitely prevail.

You seem to indicate that these are your essays but in Part 1 it states that the article was by Mychal Massie and first published in the Daily Rant.

I would be grateful if you would just confirm the position before I respond further.

RoseAnn Salanitri’s by-line appears on those essays because she wrote them.

They carry that copyright notice on Mychal Massie’s site because he has first publication rights to them, so they appear first on his site before they appear here.