I’ve got a question for you? Where has God ever failed a faithful man or faithful woman of God or His Church?

God never fails His own 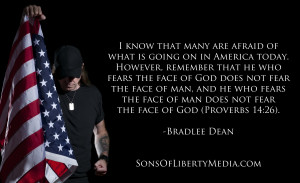 After all of the hours of reading these books, I have to ask you again, where has God ever failed a faithful man or faithful woman of God or His Church?

Can’t find it? Neither could I.

To those of you who love God, understand that there are more than 110 places in Scripture where we are told “Fear not,” “Do not be afraid,” and “Do not fear!”

Who fails whom in America today?

Blessed be the Lord, that hath given rest unto his people Israel, according to all that he promised: there hath not failed one word of all his good promise, which he promised by the hand of Moses his servant. -1 Kings 8:56

There once was a man who had to reach a certain destination at a certain time, but he was caught in a snowstorm. He came to a river that had frozen over and thought to himself, “How thick is the ice? Will it hold my weight?”

The ice felt solid. So, he reached a little further and tapped on the ice to test whether it could hold his weight. He took a branch from a tree and smacked the ice to see if it would crack….Nothing.

As he crawled across the ice on his stomach, sweat began to fall down his brow and he began to tremble with fear, thinking that at any moment he could fall through the ice and go to an icy grave. He took the branch that he had and continued to tap the ice in front of him as crawled on. The man covered about forty-five feet in roughly forty-five minutes. He was absolutely terrified.

As he was crawling inch by inch, he heard a strange sound. He heard singing, and then a rumbling. He looked behind him to see another man with a cart full of coal whipping his horse in front of him, slamming across the ice, singing at the top of his lungs.

The man stood up and felt like a fool because the ice was solid right through to the bottom. The knowledge that he received from a demonstration of faith released him from all of his fears.

The point: Don’t fear that God will not keep His promises. They are solid through and through. You can trust Him.

Trust in the LORD with all thine heart; and lean not unto thine own understanding. In all thy ways acknowledge him, and he shall direct thy paths. – Proverbs 3:5-6

Video: are you the next Braveheart or Esther?