The Supreme Court declared, “We are a Christian people…according to one another the equal right of religious freedom, and acknowledging with the reverence the duty of obedience to God.” -United States v. Macintosh (1931)

The job of the Supreme Court 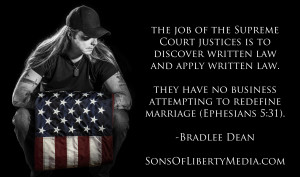 While there are some American people that are ignorantly anticipating the Supreme Court’s decision on what its definition of marriage is, it is important to remember that the job of the Supreme Court justices is to discover written law and apply written law. They are not there to legislate or to activate, nor is it their business to redefine what they do not agree with when it come to the One who gave law.

In essence, they have no business attempting to redefine marriage (Ephesians 5:31).

No enactment of man can be considered law unless it conforms to the law of God. – Judge William Blackstone

The black robed tyrants are like a bunch of pigeons picking at peas. They pick the cases they do not want to hear and choose the ones they do. It is their duty and obligation to interpret law against crime, not promote crime (1 Peter 2:14).

Every step of the way, the states have combated and ignored the established laws concerning marriage in an attempt to overthrow America’s sovereignty.

There has never been, and never will be, marriage that is based on sodomy. It is an institution which belongs exclusively to the Church and not to the state. God-ordained marriage cannot be changed regardless of what the people or the judges may say or what the people want if contrary to God’s moral law.

Of course, to do that Obama had to set the stage. He repealed Don’t Ask Don’t Tell and place 225 homosexuals in key positions. Then he appointed a radical lesbian to the bench of the Supreme Court, Elena Kagan.

Elena Kagan is the former dean of students at Harvard. Contrary to Harvard’s founding mottos, “For Christ and the Church” and “For the glory of Christ,” Kagan is known for “Queerifying Harvard.”

Elena Kagan has never judged a case a day in her life. Yet, Obama, unqualified for office himself, has seen fit to “qualify” her for the Supreme Court.

America needs to come to terms and understand that no president, no administration, no Supreme Court, has a right to break God’s laws.

America, your only hope is responding to the crimes of those who believe that they are above the law, which they are not. Impeachment and indictment are the rightful remedies for such criminals found in Article 2, Sections 4, and Article 3, Section 1 of our Constitution.

To Spit Against Heaven