The Bible is for the government of the People, by the People and for the People. –John Wycliffe

Just in the month of May, we have seen the attacks toward America’s Christian heritage intensify.

The good news is that, in each situation, they are contesting their rights and are fighting back (Jude 1:3).

The bad news is most people believe that what is happening to their country is legal when, in fact, the opposite is true. The purpose of government is to ensure our rights, which God gave, not to steal them away. Just ask those who represent you to recite the oath that they took before serving “We The People.”

The rights of man come not from the generosity of the state but from the hand of God. – John F. Kennedy

Therefore, America, before feeling sorry for yourselves, I need to set the record straight. Let me remind you that it is not the ACLU or some other anti-American group or communist organization that is taking away your rights. It is the American people relinquishing and forfeiting the rights that God gave.

Here are some of the rights America has never lost:

Despite the fact that we have rights, it amazes me how much time people will spend proclaiming defeat and giving power over to corruption when they still have the freedom to do the right things.

If the American people would spend their time bringing about resolve by upholding the law, advocating judgment and thereby establishing righteousness and peace, we would have a different country in just one week.

Do students belong to God or government? 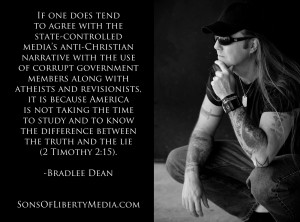 People have also been deceived into thinking that students in the public schools belong to the government, as if to say the federal government is free to violate the 10th Amendment at will.

If one does tend to agree with the state-controlled media’s anti-Christian narrative with the use of corrupt government members along with atheists and revisionists, it is because America is not taking the time to study and to know the difference between the truth and the lie (2 Timothy 2:15).

It is when people forget God that tyrants forge their chains. –Reverend Gardiner Spring

I have a personal friend who is a former CIA agent, who told me that the two objectives of this criminal administration is to upend America’s Christian heritage, as well as the American Constitution. By the way, that will never happen (1 Peter 1:25)!

What you are seeing in America today is foreign governments at work assailing and indoctrinating the up and coming generations in hopes of overthrowing who you are.

Now, I hope you can understand why William Penn stated, “Men must be governed by God or they will be ruled by tyrants.”

Video: They Would Just Sing Louder!