The Great Winnowing has taken place. The enemies of Christ celebrate large numbers of people abandoning the Christian faith. Or so they think. All we really see are people dropping all pretense. They wore the mask of a faith they never believed. (And Jesus Christ scolded such people as no different from the play-actors of the Greek theater of His day.) Next, one way or another, will come a great soul harvest, as the Apostle and Revelator, St. John of Jerusalem, said it would.

The Winnowing before the soul harvest

Two weeks ago the Pew Research Center for People and the Press gave us the evidence for the Winnowing we now see. In their headline they said America’s “religious landscape” has changed. The graphic tells the story. Notice: evangelical Protestants lost less than one percent of their numbers. Catholics and mainline Protestants lost more. And unaffiliated persons gained 6.7 percent. All this, over seven years. (CNAV thanks the Pew Center for their published embedding code. CNAV changed some of that code for editorial reasons.)

This line graph does mislead, to this extent: the sum of Catholic and Protestant shares of the population still exceeds fifty percent. Most media organs covering the story, fail to mention this. (To dig deeper into the numbers, follow this link the Pew staff kindly left.)

Michael Gerson, at The Washington Post, said “casual Christianity” would disappear from America. So did Bob Allen at The Political Outcast. Two different men, from two different ideologies, noticed the same thing.

What does that “unaffiliated” category include? Atheists, agnostics, and those saying they believe “nothing in particular,” make it up. Most of its growth turns out to be in the “nothing in particular” numbers. Atheists grew their population share from 1.6 percent to 3.1 percent. Again, most media organs don’t mention that. Instead, many start crowing about the “doom” of Christianity. Mr. Gerson at the Post did not fall into that trap.

Instead, Gerson sees “an appealing, popular culture” with “its own standards and values” seducing people, especially young people, away from traditional faith. Mr. Allen would probably agree. But he would likely hesitate to call “moral relativism” a “standard,” and still less “lifestyle liberalism” a “value.” Both men see the larger point: people won’t pretend to a faith that today differs little from the surrounding culture. Gerson advises Christians to go along with this. Allen does not. And Allen stands on firmer Biblical ground. Ground from which one can make a proper soul harvest.

Metaphors for a soul harvest

Jesus Christ Himself said such a state would supervene “at the end of the world.” In parable after parable (see Matthew 13) He made the point about the great soul harvest to come. Who, having gone to Sunday school, can forget the parable of the wheat and tares? Or the parable of the good fish and bad fish caught in the same net?

The sower’s parable (Jesus’ first) probably tells the story best. A sower sows seed on all sorts of ground. Some falls onto a path, for passing birds to eat. Some falls into rocky ground and grows up quickly and dies just as quickly. Some falls among thorny plants only to have those plants stunt their growth. But some seed falls onto good land and yields a hundred-fold harvest. Those Pew numbers show nominal Christians finally dis-affiliating. The seed falling on rocky ground or in briar patches, represents those people. (The seed falling on the path represents the stone-cold atheists.) 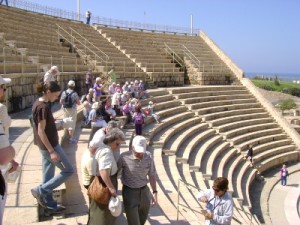 But Jesus had harsher words for anyone “keeping up appearances” for convenience or to let everybody see how “virtuous” they were. Recall this bit of history: Herod the Great, before Jesus was born, built a great amphitheater in Caesaria Maritima. (That amphitheater still stands.) So Greek theater played an important role in the culture of ancient Judea Province. Those who took part in Greek theater, wore masks, both to complete their portraits and to hide who they were. For with rare exception, no one made a career in Greek theater. Actors had other lives, and often did not want people to know they acted in Greek plays. The Greeks themselves coined this word for an amphitheater actor: hypokrites, literally “the man under the mask,” from hypo– under and krites a mask. (The noun krites also stands for a judge; hence “critic,” “critical,” “criterion,” etc.)

How often do you read in Scripture of Jesus railing against His political enemies and denouncing them as hypocrites? He really was saying, “What a bunch of no-account strutting play-actors you are! You’re only pretending to understand something you know nothing about. I would respect you more if you dropped it!” Today we call one who says one thing and means another, a hypocrite. So what does the Pew Center really have to tell us? The hypocrites, like rats deserting a ship they think is foundering, have torn off their masks and left the theater. And that, as Bob Allen clearly understands, a genuine Christian should welcome. Welcome it, because one cannot reap a good soul harvest if one thinks he stands in the middle of a good crop, when he doesn’t. The plants among the rocks and in the briar patches, shriveled up and died. Now, thanks to Pew, we can all see that. So we can sow our seed on good land. The seed will take time to grow. But Jesus said we would reap hundredfold, sixtyfold, or at least thirtyfold yields in the soul harvest to come. And John the Apostle/Revelator described a soul harvest too vast to count. (Revelation chapter 7.)

Part of good soul farming, that will lead to a good soul harvest, is withdrawing our sanction from government substitutes for things only the church should do. An Alabama State Senator understands this. More than a week ago he introduced a bill so that persons seeking to get married in Alabama would no longer need a license from the State. Instead they would draw up their own marriage contract and record this with their county probate judge. That bill passed the Alabama Senate, twenty-two to three. A good step toward taking marriage back to the church (or the Temple). Probate is one institution where the church should reclaim authority for the sake of its own members. Education gives another example. And education plays a more important role. An educator feeds the mind. (So maybe the sower’s seed falling on the path represents children in government schools, who learn God does not exist.)

In sum: Christians have winnowed themselves out. Hypocrites have long inflated the numbers of Christians. This has led political leaders to miscalculate, often with disastrous results. The Body of Christ that remains, will have greater strength, because we mean what we say. That will make the soul harvest that much easier.

Ruled by God or tyrants?