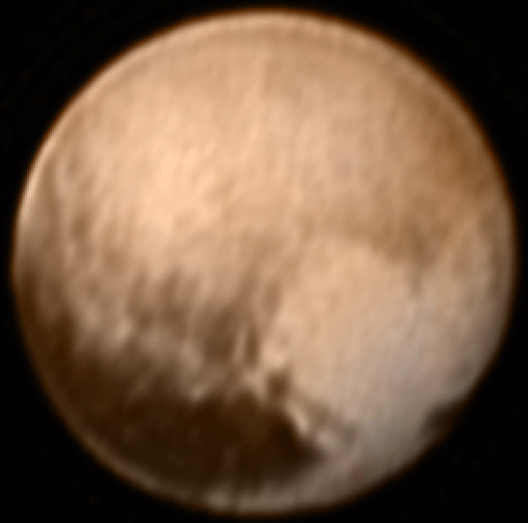 The New Horizons spacecraft sent back the first of many photographs it took as it flew through the Pluto-Charon system. (See this article by Amanda Barnett at CNN.) These photographs present yet another problem for uniformitarian astronomers. Pluto and Charon both have surface features (or in one case the lack of surface features) that suggest youth, not great age, for these bodies. Conventional astronomers will no doubt insist on considering Pluto and Charon about 4.56 billion years ancient. If so, they must explain mountains with sharp features, and (on Charon) relatively few impact craters.

In contrast, creation scientists need consider Pluto and Charon only seven thousand years old – or even younger: 5300 years old, give or take a hundred. Walter T. Brown, of the Center for Scientific Creation, guesses the Biblical or Global Flood took place that many years ago. These new photographs should vindicate his Hydroplate Theory further.

Pluto and its young mountains

NASA and the Johns Hopkins University Applied Physics Laboratory both keep their own Web sites to keep the public up-to-date on the New Horizons mission. Today (15 July 2015) the JHUAPL released this article about the latest photographs from Pluto.

Any scientist worth his degree, relishes data that challenge long-standing theories, up to a point. New Horizons might have reached the point at which the investigators do not welcome that challenge. Among the first images the probe sent back after flying through the system is a relatively low-resolution image of a region near the apex of the now-famous “heart shape” on Pluto. (New Horizons will send back another, high-resolution image months later.) The photograph shows tall mountains on Pluto, rising as high as 3500 meters (11,000 feet) above mean ground level. These peaks stand out in sharp relief and do not show 4.56 billion years of erosion. The science team guesses these mountains must have formed 100 million years ago. Jeff Moore of the New Horizons Geology, Geophysics and Imaging Team (GGI) now says Pluto has “one of the youngest surfaces we’ve seen in the solar system.”

John Spencer, Jeff Moore’s deputy, said, “This may cause us to rethink what powers geological activity on many other icy worlds.” He has a problem. Pluto has no larger body to cause tidal heating or other tidal stress. So when he speaks of “rethinking…geological activity,” he means: he and his colleagues cannot explain this.

Charon, the large moon, offers another problem. It has too few impact craters. A new photograph does show a 1,000-kilometer stretch of cliffs and chasms, and a 4- to 6-mile-deep canyon near Charon’s north pole. One of two things happened. Either few if any meteoroids bombarded Charon, or after they did, Charon suffered tremendous “moonquakes” that erased the craters.

New Horizons also has the best photograph yet of Hydra, outermost moon of Pluto. As one might expect, Hydra does not have the classic ball shape of a larger object. The potato-shaped moon measures about 43 by 33 kilometers. Thus far, New Horizons has little color information. Observers believe a layer of water ice covers Hydra.

Pluto and its frozen atmosphere

Much of the atmosphere Pluto once had, has frozen. The spectrophotometer reveals abundant methane ice. But that ice lies more abundantly in some parts of Pluto than on others. What could have frozen that methane in place so quickly that it did not distribute itself evenly over the surface?

False-color composite images of Pluto and Charon put the problem in sharper perspective. The surface of Pluto does not have a uniform coating. This goes beyond the light-colored heart shape. In fact Pluto and Charon both have many different coatings on different parts of their surfaces.

Scientists have known about the pink-brown color of Pluto for decades. Classically they attribute this color to a new class of substance called a tholin, from an ancient Greek word describing a mud or sepia-ink color. Carl Sagan and Bishun Khare invented the concept after some creative reverse-engineering. They synthesized these substances by bombarding an atmosphere of methane, nitrogen and ammonia with ultraviolet light. (Stanley Miller and Harold Urey got amino acids by similarly postulating a “primitive atmosphere.”)

No doubt, the New Horizons teams will say a great deal more about tholins than most people know about today. But: will they describe exactly how much ultraviolet light must fall on such an atmosphere to produce tholins? Or whether the components of an atmosphere that can make tholins exists or existed? (That assumes they can even show they’re looking at complex organic molecules, and not at simple iron rust!) Maybe they can explain Pluto’s color that way. But how about Charon, which has no atmosphere that any astronomer has ever before detected?

Of course, astronomers today say not a word about another problem for uniformitarian theories. Charon has young, crystalline ice on it. No one supposes that ice formed 4.56 billion years ago. If it had, today the ice would turn amorphous. No one wants to admit the problem. But this ice gives further evidence for a young Charon, and a young Pluto.

New Horizons gives even further evidence to regard Pluto and its wide-binary companion as young, not old. According to the Hydroplate Theory, both bodies are younger even than earth. That explains young mountains, a young (crater-free) ground for the largest moon of Pluto, young crystalline water ice, and other ices that have not had time to distribute themselves evenly.

Walter T. Brown took note of the icy mountains of Pluto, and the relative lack of impact craters on Pluto and especially on Charon. He lists these on this page of his on-line book, In the Beginning: Compelling Evidence for Creation and the Flood. He believes the icy mountains formed from cryovolcanism, with multiple impacts as the trigger.

Because Pluto is the largest known TNO, it probably received more heat-producing impacts than all other TNOs as it grew from its swarm stage following the flood. All that heat would have melted some of Pluto’s internal ice causing delayed eruptions of slushy geysers on Pluto’s surface. Eruptions here on Earth produce volcanic cones and ash. On Pluto they produced icy mountains and snow storms that buried many craters.

These snow storms did not bury all the craters on Pluto. They left some prominent craters for New Horizons to see and photograph. But those mountains rise to an altitude more than three-tenths of one percent of the radius of Pluto. A mountain on Earth rising to a proportional altitude, would rise about twelve miles high – more than twice as high as Mount Everest.

Equatorial surface of Pluto, showing mountains rising as high as 3500 meters above mean ground level and standing out in stark relief–too stark to be 4.56 billion years old. Source: NASA/JHUAPL/SwRI

Charon, having almost the same color as Pluto, and with few impact craters, but many cliffs, chasms, and a deep canyon, all from tidal stress. Source: NASA/JHUAPL/SwRI

Methane and other ices on Pluto, distributed unevenly. Source: NASA/JHUAPL/SwRI

Pluto and Charon in false color, showing variegation in ground composition for both bodies. Source: NASA/JHUAPL/SwRI