“Real leaders are not called to lead up consensus. They are to mold consensus. And without a doubt, this will create enemies.”

When you see a leader taking a stand and, as a result, his life is threatened, and he gets dumped by his sponsors, condemned by the establishment “politicians” and taken out of context by the state-controlled media, you have to understand that he is not one that is going along to get along, but rather is a genuine leader. This, in many cases, is the identifying characteristic when it comes to what a leader looks and acts like. And real leaders are what is needed in America (Rev. 5:5).

What is a leader? Often, when making a new contact, I will first vet them before allying myself (Amos 3:3). After all, there is a huge difference between a public person and a leader.

For example, I had a very well-known preacher come to stay out at my place, but before having him come out I went and vetted him to see what his enemies were saying of him (John 15:17-18). Lo and behold, I discovered he had many unlawful and un-American enemies attacking his ministry. He was leading, not asking permission to do so. At every turn, he seemed to be in trouble for standing up for righteousness and the laws of our republic (Matthew 5:10; Luke 6:22-26).

Blessed are they which are persecuted for righteousness’ sake: for theirs is the kingdom of heaven.

In contrast, how many of today’s self-positioned leaders, regardless if they are preachers, patriots or conservatives, are as worthless as the ones whom they complain about? After all, they have a reputation to keep up (Philippians 2:7-9). They go along to get along. They don’t offend anyone because they do not stand for anything; and if they were to have enemies, someone might think ill of them for actually taking a stand for what is right. Of course, they cannot have that (Gal. 6:12).

In the conservative movement (today’s conservatives are yesterday’s liberals), for example, you have a bunch of men who are no more than paper tigers. They play the politically correct game as long as it is safe enough for them to hide behind their computers and get away with whatever it is that they write. Because they live under a false pretense, they are too spineless to actually fight for what they say that they love (2 Timothy 4:7; Jude 1:3).

As a matter of fact, when it comes to the fight, which is the furthest thing from their minds, they say, “Let someone else do the fighting,” demonstrating their lack of integrity. They love their country so much that their degree of sacrifice is going to another fruitless conference to be seen and talk. Of course, it goes no further than talk (Matthew 15:8).

They hide behind a title, watching the game of life and telling everyone how they are to live their lives, but not applying it to themselves (Jeremiah 9:3; Malachi 2:2). Hypocrites!

Search out your favorite patriot, preacher or conservative and see what they stand for. If there is no opposition, it means they are not standing.

What of the women? I am not here talking about the women that are laying it down, doing what the men ought to be doing. I high five these brave and classy women such as Pamela Geller, Brigitte Gabriel, Katherine Albrecht and others.

I am talking of the conservative women, which you can find everywhere but where they ought to be, and with someone else except who they ought to be with. These conservative women act like little 15-year-old cheerleaders who did not get their fill of attention in high school. Now they have brought it into adulthood. To them, the fight for liberty is some sort of fashion show fantasy. The sad fact is that everyone sees them for what they are; and that is “little, immature, snotty girls” who never grew up mentally, but are trapped in the body of 50 or 60-year-old woman.

These women love the limelight so much that everything is sacrificed, including their families. This is all for the opportunity to be seen by men (Matthew 23:5). They love their titles too, and don’t forget to add them to their names when they are out in public. Apparently these women do not have the right people around them that actually love them enough to tell them to grow up and raise their families (Titus 2:4-5).

Do a search on these worldlings and you will find nothing that proves the contrary to what I am saying. 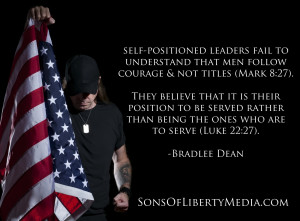 Herein lies the problem with the America we know. These profess to be one thing. Yet, in reality, they are the opposite. They are no different than what they complain about (1 Kings 18:21). In short, these people are the problem (Philippians 3:18). They contend that they want peace in a world that is at war with what they profess to believe in, but they do not go to war to have it set right (John 16:33).

These self-positioned leaders fail to understand that men follow courage and not titles (Mark 8:27). They believe that it is their position to be served rather than being the ones who are to serve (Luke 22:27).

Do you deny what a leader is, and how to tell a real leader from a phony?

Maybe if you added he doesn’t change his position based on which way the wind is blowing . That he is honest and moral and is steadfast when the going gets tough . That he has the intestinal fortitude to make and follow through with decisions that are not ” popular” and owns his resolve .

terry, a REAL leader listens to others and considers what is the best option in a situation. what you advocate is tyranny.

“A real leader fears no one, and asks permission of no one.” Said Hitler