When informed patriots look at the decline evident all over America, it would be easy for them to seek out some nice safe corner of the world and hide from the storm. However, that is not the nature of patriots. That is the nature of cowards.

Patriots, on the other hand, believe in their country and the principles it embodies and are willing to stand up and fight for what they believe. True patriots will be strong and courageous in the face of the evil that has infiltrated our government. Although there may be times when they become discouraged, those times will be far and few in between. They will not allow themselves or those around them to become discouraged and give up the country they love to despots and wolves in sheep’s clothing. They will not submit themselves or their children’s future to politically correct bullies masquerading as the masses. Regardless of their ancestral heritage, they are children of the Pilgrims and the Puritans who came to this land embracing an intellectual idea – an idea that freedom is worth the risk of persecution, the risk of facing perilous seas, the risk of facing the unknown. 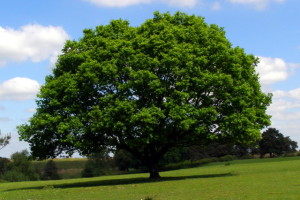 A small oak growing in isolation on an area of lawn on Stoney Cross Plain. © Copyright Jim Champion and licensed for reuse under the Creative Commons BY-SA 2.0 Generic License

This essay is written for them – for those who value the blessings of liberty that have been fought for, died for, and have been bestowed upon us. For the idea of liberty cannot survive if those who believe in it are not willing to be strong and courageous in the face of evil. Jefferson understood that the sovereignty of the people cannot continue to exist in a democracy where the people are uneducated. The uneducated will always succumb to the siren’s song of socialism and the promises of establishing Utopia for the masses in the name of equality. Then the power of the majority will rule over the rights of the minority as the voting majority influences legislators who are more concerned about bringing home the bacon for their districts than doing what’s right for the country. Alexis de Tocqueville referred to this as the “tyranny of the majority.”

Tyranny of the perceived majority

In America today we are not facing the tyranny of the majority. We are facing the tyranny of the perceived majority. They are perceived to be the majority because their voices are louder and they vote in greater numbers – much to our disgrace. However, they are not the real majority; they are only louder. This perceived majority has sculpted public opinion and has coalesced a two-party system into one. Tocqueville rightly observed that the majority (whether perceived or real) intimidates the very souls of the minority by breaking their will to resist through ridicule and various assaults against their liberty of conscience. Consequently, their very thoughts become inhibited, which in turn inhibits their speech. He understood that a nation cannot remain strong when its citizens have been weakened and broken in this manner. He also understood that political societies are not made by their laws, but are sculpted by the sentiments, beliefs, ideas, the habits of the hearts and minds of the people and by what their education has influenced them to become. In other words, the social/cultural state of a nation shapes the political state. In the end, the majority (or in our case the perceived majority) wins – not because they are right; because they have bullied their way to success.

How sad for us that all this has been accomplished by perception and not reality. And how sad for us that we have not understood that their cries for equality were cries by the weak meant to bring down the strong. We have succumbed to their cries because we have not realized that they are based on jealousy and not equality, which has become their most effective buzz word. And we have not understood that their demi-god of income redistribution is not noble but a violation of the commandment clearly states that thou shall not covet anything that is they neighbors – thereby making social justice no justice at all but government-sanctioned thievery. Our unwillingness to call a spade a “spade” has allowed the enemies of liberty to use the argument of equality to promote collectivism, which annihilates individualism and consequently liberty of conscience. It can easily be argued that promoting equality – or any of its twin devils: collectivism, social justice, or income redistribution – will destroy individual rights and lead to tyranny. Galatians 5:1 says: “It is for freedom that Christ has set us free. Stand firm, then, and do not let yourselves be burdened again by a yoke of slavery.” In other words, be strong and don’t become slaves – either financially or spiritually through nice-sounding phrases that are contrary to the will of God. Christ has set us free but we must stand firm to live free.

How to be strong and courageous

How do we stand firm? How can we be strong and courageous? We can start by ignoring the ridicule and the mental gymnastics designed to intimidate us. We can educate ourselves, our children, our neighbors, and anyone within our sphere of influence about the propaganda being spread by the mainstream media and anti-American and anti-God government-approved curricula. We can make our voices heard everywhere and anywhere possible. We can see through the cries for equality as coercive attempts to embarrass the strong and successful into surrendering their well-earned prosperity to those that have neither earned nor deserve it. And most of all – we can expose the perception that the minority is the majority by reclaiming what is rightfully ours at the polls and voting as the majority that we are.

Many may think that America is too far gone, that she is lost forever. They say they believe but they do not understand that if God goes before us, who can be against us. Indeed, the nations may rage, and the people plot a vain thing, and the kings of the earth and the rulers take counsel together against the Lord and against His Anointed, but He who sits in the heavens will laugh. Don’t take my word for it. Read Psalm 2. We may feel defeated by those plotting against us, but God is laughing in heaven. And His admonition to us is the same as it was to Joshua who was about to enter into a hostile land to claim what his people had been promised: Be strong and of good courage. For in today’s day and age, you cannot consider yourself a patriot if you are intimidated by the perceived majority or willing to submit your liberty of conscience to the entitlement bullies. Patriots know what they believe and are willing to stand strong for what they believe. Or you can try to find that safe corner of the world where you can hide from the intimidation of the unrighteous, which makes you a coward. The choice is yours.

Part of the reason the Paper Tiger that is the American leftist movement is so powerful is good people have allowed themselves to be intimidated and haven’t stood shoulder-to-shoulder in opposition to the bizarre nonsense being pushed on us by a small minority.