Cities across America are reporting startling increases in violence. I attribute this increase largely to the anti-American president Barack Obama.

Laying a foundation for violence

From the outset of his first campaign for the presidency eight years ago, Obama has cast visible contempt on America’s two foundational documents, the Declaration of Independence and the Constitution.

The pivotal concept of the Declaration is “the Laws of Nature and of Nature’s God.” Obama rejects this all-important concept since he is an avowed multi-cultural moral relativist. And since he has also disdained the Constitution, the supreme law of the land, he has imbued countless people with contempt for law in general. 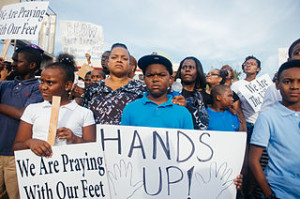 An iconic picket sign. The one carrying it had no concept of the real source of the violence that took one life and would endanger others in the days that followed. Photo courtesy Jamelle Bouie, CC BY 2.0 Generic License

At the same time, Obama’s “outreach” foreign policy, has dignified despotic regimes in which the rule of men supplants the rule of law, regimes from the Palestinian Authority to the Mullocracy of Iran.

Moreover, not only does Obama fail to condemn Islamic terrorism without equivocation, but he also displays contempt for Israel, the only nation in the Middle East that upholds the rule of law and the inviolable dignity of the individual.

This highly visible President of the most powerful nation on earth – this President whose acts and speeches are reported everywhere – has been the most pernicious example on earth to Americans and mankind in general.

Creating an atmosphere for violence to flourish

Obama’s multicultural moral relativism, and his conspicuous laxity toward Islamic terrorism – he has appointed Muslims to important positions in his administration – has prompted the “wicked in spirit”to become the “wicked in practice.” The quoted words are those Abraham Lincoln used back in 1837 when racial violence had erupted in the United States and when many law-breakers went unpunished.

This simple psychological fact about the “wicked in spirit” becoming the “wicked in practice,” has been ignored by pundits. But this fact, affirmed by commonsense, and well understood by any criminologist uncorrupted by liberalism, has contributed enormously to the upsurge of violence in cities across America as well as to Islamic terrorism across the globe.

Indeed, the mere fact that doubt remains about Obama’s eligibility to hold the highest office in the land, places in question the laws he has signed – enough to cynicism and generate contempt for law and order among the masses, above all, among Muslims who regard “infidel” Americans as dogs and pigs. “Pigs” is a choice word that criminals use to describe the police!

The outbreak of violence in American cities will not subside so long as Obama remains in office.◙

All war all the time