“I am rough, boisterous, stormy and altogether warlike. I am born to fight against innumerable monsters and devils. I must remove stumps and stones, cut away thistles, and thorns, and clear the wild forests.” -Martin Luther

In the light of Scripture, it is relatively simple to see how biblically illiterate people are in the American Church when it comes to identifying a biblical prophet (Jeremiah 23:21).

Why does God send prophets? 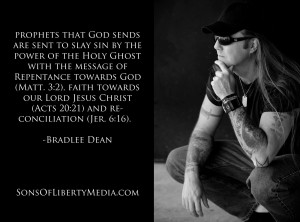 People love to make the claim that God has not changed and that He is the same yesterday, today and forever (Hebrews 13:8), which is true. However, when it comes to His prophets, they fail to remember that the prophets that God sends are sent to slay sin by the power of the Holy Ghost with the message of Repentance towards God (Matthew 3:2), faith towards our Lord Jesus Christ (Acts 20:21) and reconciliation (Jeremiah 6:16). Their message is not a message that plays with or overlooks sin. God has not changed and neither have the characteristics, attributes and actions of His prophets today.

Therefore have I hewed them by the prophets; I have slain them by the words of my mouth: and thy judgments are as the light that goeth forth (Hosea 6:5).

What makes a real prophet?

So, let me show you the picture of a prophet to help you make distinction from the false prophets, who aid in making war against God, and His genuine prophets (Micah 3:5).

The group challenged by the prophet because they are smug and comfortably insulated from a perishing world in their warm but untested theology, is not likely to vote him “Man of the year” when he refers to them as habituates of the synagogue of Satan!

The prophet comes to set up that which is upset. His work is to call into line those who are out of line (Proverbs 6:23). He is unpopular because he opposes the popular in morality and spirituality (Matthew 7:14) in a day of faceless politicians and voiceless hirelings.

The function of the prophet, as Austin-Sparks once said, “has almost always been that of recovery.”

The prophet is God’s detective seeking for a lost treasure. The degree of his effectiveness is determined by his measure of unpopularity (John 7:7). Compromise is not known to him. He has no price tags. He is totally “otherworldly.” He is unquestionably controversial and unpardonably hostile (toward sin). He marches to another drummer! He breathes the rarefied air of inspiration. He is a “seer” who comes to lead the blind (John 14:6). He lives in the heights of God and comes into the valley with a “thus saith the Lord” (Psalm 15).

He shares some of the foreknowledge of God and so is aware of impending judgment. He lives in “splendid isolation.” He is forthright and outright, but he claims no birthright. His message is “repent, be reconciled to God or else…!” (Amos 4:12)

His prophecies are parried. His truth brings torment, but his voice is never void. He is the villain of today and the hero of tomorrow (Matthew 23:30-31). He is excommunicated while alive and exalted when dead! He is dishonored with epithets when breathing and honored with epitaphs when dead.

He is a schoolmaster to bring us to Christ (Galatians 3:24), but few “make the grade” in his class. He is friendless while living and famous when dead.

He is against the establishment in ministry (1 Kings 18:40); then he is established as a saint by posterity.

He eats daily the bread of affliction while he ministers, but he feeds the Bread of Life to those who listen (John 6:35; 1 Kings 22).

He walks before men for days but has walked before God for years. He is a scourge to the nation before he is scourged by the nation. He announces, pronounces, and denounces! He has a heart like a volcano and his words are as fire (Jeremiah 20:9; 23:29)

He talks to men about God. He carries the lamp of truth amongst heretics while he is lampooned by men. He faces God before he faces men, but he is self-effacing. He hides with God in the secret place (1 Kings 19:9), but he has nothing to hide in the marketplace.

He is naturally sensitive, but supernaturally spiritual. He has passion, purpose and pugnacity. He is ordained of God but disdained by men.

Where are the prophets of today?

There is a terrible vacuum in evangelical Christianity today. The missing person in our ranks is the prophet. The man with a terrible earnestness. The man totally otherworldly (James 4:4). The man rejected by other men, even other good men, because they consider him too austere, too severely committed, too negative and unsociable (Luke 19:21).

Let him be as plain as John the Baptist. Let him for a season be a voice crying in the wilderness (Mark 1:3) of modern theology and stagnant “churchianity.”

Let him say nothing that will draw men to himself but only that which will move men to God (1 Corinthians 2:2).

Let him come daily from the throne room of a holy God, the place where he has received the order of the day (Hebrews 4:16).

Let him, under God, unstop the ears of the millions who are deaf through the clatter of shekels milked from this hour of material mesmerism (Mark 8:18). (Leonard Ravenhill.)

Fear of God or man

‘Tis not GOD controlling the world. ‘Tis you and if you are working for what is right then GOD will help you. You have free will and are in full charge of your own destiny. Sadly that free will allows some to spread evil and terror throughout the world.
If we desire a moral government then preachers must chastise the government and politicians from the pulpit.
Evil will always prevail when good men fail to speak out.

“Nough said, Terry. A man of few but important words.

You are absolutely right, we need Prophets today as in biblical times. Surely the Lord would provide! But there are prophets on the Earth. Yes they do teach the word of God against the wickedness of our world. And yes, they are unpopular with most of the world. Below is a link about Joseph Smith, who fits your description very well.