Since Israel is at war, it behooves us to examine and convey to our fellow-countrymen what great military leaders and thinkers have said about war and its strategic principles. Let’s begin with that bold and notorious American general, George S. Patton.

Patton: a real expert in war 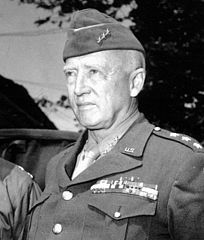 Israel’s General Staff would do well to emulate Patton, the general most feared by Nazi Germany. Thus, on the eve of battle, Patton would admonish his soldiers: “The object of war is not to die for your country.  It is to make the other poor dumb bastard die for his.”

Imagine General Moshe “Bogie” Ya’alon, Israel’s Defense Minister, saying such a thing, or Netanyahu heeding Patton’s admonition, “Never let the enemy rest’: No cease fires, no “hudnas,” which suggests that Israel’s war aim should be unconditional surrender! No wonder Patton’s soldiers loved this war horse, who told them: “We want the enemy to KNOW that they are fighting the toughest fighting men in the world!”

“Forget about army regulations … [which] are written by those who have never been in battle…” Our only mission in combat, said Patton, “is to win.” Hence general officers may sometimes have to disobey orders of the political echelon!

Patton’s famous admonition, “Grab the Enemy by the nose and kick him in the pants,” though simple, is profoundly significant in the war between Jews and Arabs. Israel must devastate these Muslims from top to bottom so as to erase the Islamic arrogance that prompts them to wage war against Israel, indeed, against all “infidels.”

Israel needs a Patton, and a leader with the will to let him fight

The Netanyahu Government must heed principles of warfare. This requires Netanyahu to order the IDF to confront and kill the enemy primarily on the battlefield.  Bombing the enemy’s infrastructure should not obscure the importance of destroying the enemy’s ground forces. The defeat of these Arab warriors must be so thorough that it will eradicate the desire of their leaders to wage war for a hundred years—the policy of the Allies powers that made militant Germany and Japan lovers of peace.

The Netanyahu Government should not be deterred by fear of world opinion, not by UN condemnation, and not by possible sanctions. Such cowardice cannot but undermine Israel’s General Staff and the fighting spirit of Israeli soldiers. Fear of adverse public opinion is baseless and it will lead to more Jewish casualties. The world admires winners, not losers.

Israel’s victory will ultimately depend on whether Netanyahu and the General Staff are animated by the profound sense of good and evil which inspired America’s greatest generals—suffice to mention, along with Patton, William Tecumseh Sherman of Civil War fame.  Both generals inspired their armies with complete confidence in the justice of their cause. Yet both pursued a war strategy that actually minimized casualties on all sides. They imbued their soldiers with the will to win and in the shortest possible time—which precludes the irrational and marsh mellow concept of “proportionality”—a concept never used by a war-winning army.

Netanyahu should emulate King David: he should display hatred of Israel’s enemies.  King David said, “I hate them, O God that hate you” (Psalm 139:21. Hatred, however, is futile if it does not issue in action. Therefore King David writes: “I pursued my enemies and overtook them, and returned not until they were destroyed. I crushed them so that they are not able to rise….” (Psalm 18:38-43),

Obviously required is the uninterrupted attack and the use of overwhelming force. Netanyahu and his Defense Minister Ehud Barak must not be intimidated by left-wing media, whose self-serving sentimentalism is in fact cruelty which can only result in the death of more Jews.  This is a message Netanyahu must also make crystal clear to the public.

It follows that Netanyahu and his generals—if they truly believe in the justice of Israel’s cause—will not shy from cruelty against her enemies. Indeed, they should fulfill the Muslim wish to die for Allah! In this war between good and evil, those Israeli generals who implement these time-tested principles of war will be our greatest humanists! □