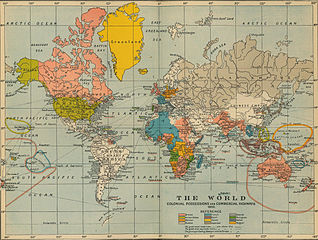 The term Western civilization was very much the creation of American intellectuals at the beginning of the 20th century.  The term denoted the world outlook that American intellectuals shared with their European counterparts:  science and the scientific conquest of nature, democratic freedom and equality, human rights and the rule of law, material abundance and unlimited progress.

And yet, hardly had the term Western civilization surfaced than Oswald Spengler wrote his Decline of the West (1918)!

As James Kurth has pointed out in a brilliant essay, “The Real Clash” (1994), the term Western civilization signifies a merely geographical direction rather than any cultural essence, in contrast to Islamic, Slavic-Orthodox, Buddhist, Confucian, and Hindu civilization.  What most clearly distinguishes Western civilization from other civilizations is that religion is not the core of its ethos, even though most people who live in the West are Christians.

Less than a hundred years after the term Western civilization was invented, America’s academic elites began to reject the term.  Indeed, they now reject not only America’s global power but also American constitutional government, capitalism, and traditional morality.  Multiculturalism (along with cultural relativism) has gained ascendancy in academe, in consequence of which the America is no longer a “melting pot” but rather an aggregation of self-assertive and self-justifying racial and ethnic groups such as African Americans, Latino Americans, and Asian Americans.  America has entered a post-modern, relativistic world.

Notice, moreover, that multiculturalism coincided with feminism, an anti-Western movement.  Feminists see in the Christian West (as well as in Judaism) male dominance and an emphasis on family values that restricts a woman’s freedom.  Notice, too, that the post-World War II change from an industrial to a services economy has moved women form the home to the office, and transformed the nuclear family into the “non-family.”  The ascendancy of multiculturalism and feminism together mark the end of Western civilization.

History seems to have played tricks on mankind.  The Enlightenment, a movement that began in eighteenth-century Europe with the separation of church and state, a movement that offered the nation or the nation-state as the object of one’s loyalty, has ended with utter hostility not only to the church but to the nation-state as well.  The Enlightenment has thus produced a black hole from which no light can emerge.  The nihilism that now dominates Europe, and which has all but conquered America—recall Alan Bloom’s The Closing of the American Mind—marks a new Dark Age.

Now it so happens that nihilism underlies American pop culture.  This pop culture is spreading throughout the globe as a result of America’s political and economic hegemony.  Devoid of reason and reverence and manifesting man’s basest instincts, American pop culture constitutes the greatest threat to all tradition-based societies or civilizations whose core is religious.  This is why Muslims regard America as the “Great Satan”—the great tempter.   This is why Israel, which behaves like a vassal of the United States, is deemed the “Small Satan.”

Israel’s intellectual and political elites appear oblivious of the irreconcilable clash between the “West” and the “Rest,” in particular Islam.  Influenced by their American counterparts, they believe in “conflict resolution” and have established departments in universities for the purpose.  Oslo is one manifestation of this obscurantism.  It were as if the conflict between the U.S. and Nazi Germany—hardly to be compared to the civilizational conflict between Israel and Islam—could have been resolved by peaceful means.  If Germany is peaceful today, it’s not only because it was conquered in war, but because the desire to conquer others was bombed out of the German people.

Israel’s ruling elites refuse to take Islam (to say nothing of Judaism) seriously.  Their mentality is post-modern, permeated by cultural relativism and an effete humanism.  They have conditioned themselves into believing that peaceful coexistence is possible between Jews and Palestinian Arabs.  (How else can these assimilated Jews appear “acceptable”?)  Never mind that these Arabs are part of a 1,400 year-old civilization that despises and hates infidels, especially Jews. Never mind that Muslims have been slaughtering Jews and Christians and even each other down through the centuries.  Never mind that Arab children have been taught to hate Jews and to emulate suicide bombers.  Israel’s Illuminati dwell in Darkness.