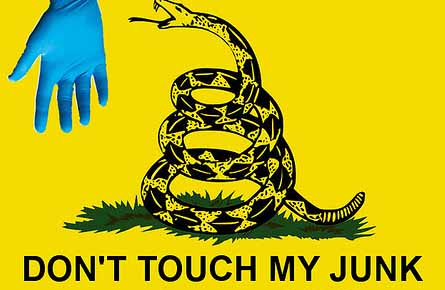 “Those who would give up essential Liberty, to purchase a little temporary Safety, deserve neither Liberty nor Safety.” So said Benjamin Franklin. (Editor’s note: see here for the original context. Dr. Franklin, not caring to see essential liberty violated, said those who feel an external threat should arm themselves against it, not look to soldiers who would violate their liberties further.)

This last week on my travels through Tennessee, stops in Texas, and stops in North Carolina and back to cold Minnesota while doing the work of the ministry, I could not help but notice the people of this country being entertained out of their freedoms through the “Super Bowl,” the televisions are filled with lusts of the flesh (1 John 216), sports (Jeremiah 11:13), and CIA diversions, while the newspaper stands are filled with lies and propaganda (Isaiah 59).

While on a plane, I watched as the grown-ups of this country were playing casino games (Exodus 20:17) on their phones, or watching dirty movies (Matthew 5:28) that the airlines hand out as an only option. The women, of course, were getting caught up with the local Hollywood gossip through their favorite fallen stars.

Before all of this could be seen, I noticed the American people were happily being violated with a smiles on their faces by the Transportation Security Administration (TSA). This is an agency that has no constitutional authority and since its inception has not thwarted one act of “violence” towards the American people.

Old ladies in wheelchairs are targeted, men and women being illegally frisked up and down, and, of course, orders were given by the unqualified and immoral.

Through the vetting process, I told the TSA agent that she does need to be grabbing my items in the scanning trays. Furthermore, I told her to read Amendment 4 of the Bill of Rights while she disdainfully stated that she has already done so.

This all comes on the heels of this administration opening the doors as wide as they can by allowing illegal Muslim refugees into the United States of America.

On the other hand, as many have been made aware of the TSA’s pretended authority, this organization has been found to be nothing less than sexually perverted criminals, thieves, drug traffickers and traitors to this country. Just like those that allowed them to be put in those positions.

If the time is taken to read the 4th Amendment of The Bill of Rights, you will clearly see who is violating the laws of our Constitutional Republic (Article 4, Section 4 of the US Constitution).

The right of the people to be secure in their persons, houses, papers, and effects, against unreasonable searches and seizures, shall not be violated …

Of course, all of these violations of law is said to protect the people of this country from the big bad “terrorists.”

As a reminder, terrorism originally defined in the Oxford Dictionary as “government by intimidation.”

Just last week, we found headlines across the country that the Department of Homeland Security ordered its agents to delete records of hundreds of Muslims with terror ties.

Our civil liberties are being violated as Obama’s Homeland Security scrubs records of hundreds of Muslim Terrorists.

The American people will still not take issue with these criminals even when it comes out of their own mouth. Does anyone recall when DHS Secretary Jeh Johnson said, “My Job is to “Give Voice to the Plight of Muslims.”

It reminds me of the German SS officer Joseph Mengele, who said, “The more we do to you, the less you seem to believe we are doing it.”

Let no man deceive you by any means: for that day shall not come, except there come a falling away first, and that man of sin be revealed, the son of perdition;

Who opposeth and exalteth himself above all that is called God, or that is worshipped; so that he as God sitteth in the temple of God, shewing himself that he is God.

Remember ye not, that, when I was yet with you, I told you these things?

And now ye know what withholdeth that he might be revealed in his time.

For the mystery of iniquity doth already work: only he who now letteth will let, until he be taken out of the way.

And then shall that Wicked be revealed, whom the Lord shall consume with the spirit of his mouth, and shall destroy with the brightness of his coming:

Even him, whose coming is after the working of Satan with all power and signs and lying wonders,

And with all deceivableness of unrighteousness in them that perish; because they received not the love of the truth, that they might be saved.

And for this cause God shall send them strong delusion, that they should believe a lie:

That they all might be damned who believed not the truth, but had pleasure in unrighteousness. 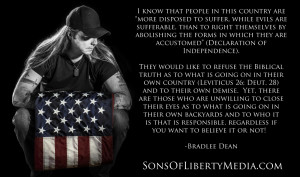 For your own sakes America, take responsibility (Acts 20:21) and act while you have the time to do so.