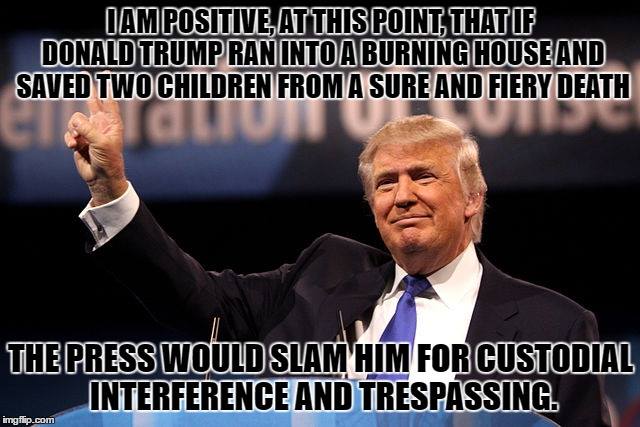 In politics they call it creating controversy. You see, Friends, if the media can create controversy where none really exists, they don’t have to spend their time covering the real and illegal controversies surrounding Hillary Clinton, whom they are supporting with extreme bias. It is a very old political trick of the media, or an opponent for that matter, of both sides. I can honestly say, in my 60 years of dealing in the political arena, this is the worst I’ve seen.

It came close to this level with Barry Goldwater but not quite. I will forever remember how they flooded the TV air waves with a picture of an atomic bomb exploding over a bunch of children playing, insinuating Barry Goldwater would blow up the world. It was plain and simple created controversy, but many fell for it. I’m surprised people are falling for it again, but that is exactly why the media, and in this case Hillary’s campaign does it, some people fall for it.

Read what Cicero said, and think about it very carefully. In a speech to the Roman Senate, as recorded by Sallust, Cicero said this. (I changed only the gender and inserted in parenthesis to apply to today’s issue.)

A nation can survive its fools and even the ambitious. But it cannot survive treason from within. An enemy at the gates is less formidable, for he is known and he carries his banners openly against the city. But the traitor moves among those within the gates freely, his (her) sly whispers rustling through all alleys, heard in the very halls of government itself. For the traitor appears no traitor; he (she) speaks in the accents familiar to his (her) victim, and he (she) wears their face and their garments and he (she) appeals to the baseness that lies deep in the hearts of all men. He (she) rots the soul of a nation; he (she) works secretly and unknown in the night to undermine the pillars of a city; he (she) infects the body politic so that it can no longer resist. A murderer is less to be feared. The traitor is the plague.

We must all understand, the press makes part of the establishment. As such they have received their marching orders to push Hillary. They are vehemently against Trump. So are many of the Republican Party bosses (elites). They include the Bush family, Lindsey Graham, Mitt Romney, Bill Krystal, John Kasich, and several others. Those in Washington want to rob the people, and continue to drink from the public trough as always. So they are desperately trying to cling to power. For instance, the claimed Billionaires for Hillary are buying the White House and various positions on committees in their efforts to hold on to their power. They know full well that President Donald Trump will surely destroy that power and mess up their playhouse. And he will do it for the sake of the nation and her people.

Those in power in Washington fear a revolution is in the wind. Indeed they watched this in Europe with the Common Market countries. Politicians know all too well that what begins in Europe spreads to the USA. It spreads as a contagion in politics just as it does in fashion. Hillary and Bill Clinton are part of them. So both the Democrats and Republican elite are behind Hillary to prevent any outsider from changing their power base. It is all about protecting their power over you and me. And so these people, with the help of their allies, the biased media, will do and/or say what ever becomes necessary to stop Donald Trump from returning power to us.

Law: who respects it?

Donald Trump did it