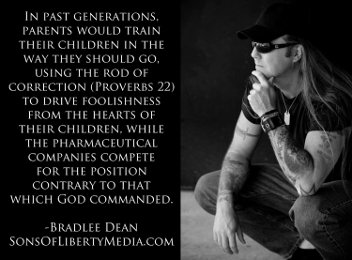 William Bennett, former Education Secretary under Ronald Reagan said, “In America today, the longer you stay in school, the dumber you get…” You get dumb from government indoctrination that poses as education.

You know the federal government is illegally (Violation of Amendment X) and intentionally indoctrinating American students in public schools. The tools of this indoctrination include International Baccalaureate, No Child Left Behind, and now Common Core. So now you have to ask yourself: “Why are 86% of them that complain about what is going on dropping their kids off at the school gate?” The 86% just happen to be Professed Christians, Patriots, and Conservatives. This 86% should also realize what schools teach today is not what schools taught 50 years ago in this country.

Case in point: in complete contradiction to America’s foundational principles, the National Education Association agrees with humanism. Humanism sums up in this excerpt by John Dunphy in his article, “A Religion for a New Age”:

Furthermore, here are examples of what the public indoctrination centers are teaching concerning various subjects.

In Texas, the State Board of Education found a total of 109,263 errors in math textbooks reviewed for use in 2008 alone. Yes, I said 109,263 errors. The board had to go so far as to place a possible fine of $5,000 per error found if editors did not fix them by spring of the same year.

In textbooks all across America, science (the study of Creation) is well-known for being laced with the dangerous theory of evolution. This theory wars against Christianity, the Bible, God and His Law, the foundation of our Republic.

The Little Girl Who Knew Better

Concerning history, I had one principal jokingly tell me, “Science and history books are being changed every three to seven years.”

In Virginia, a state review committee found a slew of errors in many history textbooks. A committee of five historians caught errors ranging from the incorrect year John Rolfe married Pocahontas to quotes that do not even appear in historical records. One book illustrated Virginia soldiers in the Revolutionary War wearing red coats, when in fact, they wore blue. Another textbook erroneously stated many colonial Americans were illiterate. In fact, literacy rates were extremely high.

Retired Library of Virginia historian Brent Tarter wrote in his review of a textbook titled Our Virginia, “I also found some very significant omissions, some internal inconsistencies, and some erroneous or questionable descriptions and analyses of historical events. Some are so ludicrous and difficult to explain that I cannot understand where the misinformation came from.”

Interestingly enough, in recent years, American public schools have been indoctrinated with the Muslim religion. Studies have shown over 500 historical errors in public school textbooks, giving an Islamic slant to our youth.

They are even subjecting elementary school students to the D.A.R.E. program. This has statistically proven to educate the students as to how to commit the crime of drug abuse rather than prevent it.

What of antidepressants prescriptions? They are simply attempting to set students up for the fall to prescribe dangerous psychotropic drugs.

Leon Eisenberg (Father of ADHD), in his last interview before his death, said, “ADHD is a prime example of a fictitious disease.”

This dramatic increase in usage could possibly be in direct connection to the controversial TeenScreen survey. Authorities give this to children as young as 9 years old in public schools. TeenScreen has been responsible for policing the mental health of students over the past decade.

More and more public schools have brought in the manipulative survey for children, setting them up for a prescription. For example, one of the questions is: “Has there been a time when you felt you couldn’t do anything well or that you weren’t as good-looking or smart as other people?” Another question is: “In the last year, has there been any situation when you had less energy than usual?”

Nearly 20 percent of students who take the survey fall out as mentally ill, which leads to a prescription. The government sells this process as suicide prevention. However, the U.S. Preventive Services Task Force found “no evidence” that screening for suicide risk reduces suicide attempts.

In past generations, parents would train their children in the way they should go. They used the rod of correction (Proverbs 22) to drive foolishness from the hearts of their children. But today the pharmaceutical companies compete for the position contrary to what God commanded.

In the meantime, pharmaceutical companies rake in hundreds of millions of dollars a day. Meanwhile, schools use America’s students as political and medical guinea pigs.

Most Americans don’t even realize that Obama is attempting to deputize the medical industry to screen the mental health of every American.

Herein lies the “attention deficit.” The deficit lies within the responsibility of the parents, not the child.

To further add insult to injury with the help of the NEA, students have become a prey to teachers.

The real question to ask here is “Why are there public schools?”

Only you can answer that.

Public Schools are teaching what?

Related Topics:bibleeducationevolutionhistorymoralityscientific theory
Up Next

Home schooling is challenging and a particular struggle for two income families, but well worth the sacrifice. I can’t recommend it strongly enough.