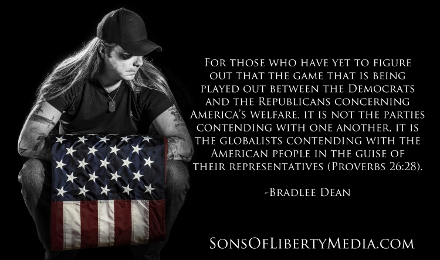 “The people can always be brought to the bidding of the leaders. That is easy. All you have to do is tell them they are being attacked and denounce the pacifists for lack of patriotism and exposing the country to danger. It works the same way in any country.” –Herman Göring

For those who have yet to figure out that the game that is being played out between the Democrats and the Republicans concerning America’s welfare, it is not the parties contending with one another, it is the globalists contending with the American people in the guise of their representatives (Proverbs 26:28).

The real threat to you and your freedoms in America does not come from those hiding out in a cave wearing turbans on their heads yelling, “Allahu Akbar.” It is coming from men and woman wearing suits and ties in Washington D.C. that are selling you out.

Who is really waging war? Check the headlines

To prove my point check out these recent headlines just over the last week:

Former CIA Officer: Most Terrorists are False Flag terrorists, or are CREATED by our own Security Services

DHS Memo acknowledges the fact that Refugees Fraud is Happening

Major Swedish Columnist Cecilia Hagen: Anybody Who Doesn’t Support Islam and Muslims is a Rat and needs to be Exterminated

Muslims and Germans Working Together to Revive The Nazi Empire

Coming to an Elementary School Near You, Courtesy of Common Core: Doll Beheadings

Back in October of 2015, Governor Mark Dayton, voted worst senator in United States history, said to the people of Minnesota, “If you do not like immigrants, get out of Minnesota.”

Who are the terrorists? Who are these “Useful Idiots” working for?

Line this up with what Former British Secretary Robin Cook Inter-Services Intelligence: “The truth is there is no Islamic army or terrorist group called Al-Qaeda. And any informed intelligence officer knows this. But, there is a propaganda campaign to make the public believe in the presence of an identified entity representing the “devil” only to drive TV watchers to accept a unified international leadership for a war against terrorism. The country behind this is The US…”

Americans all the well know that the present administration has done everything in its power to aid, to abet and to fund America’s enemies both within and without. The devil is found in the details (2 Corinthians 11:14; 2 Thessalonians 2:8).

This Saul Alinsky disciple has been assailing everything American since day one by creating war within and without (P.S. It has been recently reported that Barrack Hussein Obama is a war criminal)

Any revolutionary change must be preceded by a passive, affirmative, non-challenging attitude toward change among the mass of our people. They must feel so frustrated, so defeated, so lost, so futureless in the prevailing system that they are willing to let go of the past and chance the future.

Hillary Clinton, also a Saul Alinsky disciple of the devil, was exposed recently by Wikileaks email dump that Saudi Arabia and Qatar are funding ISIS. Are these not the enemies of America that are funding Hillary Clinton’s foundation? Why, of course, they are.

She went on and said terrorism is “Not a said threat to us as a nation.” It seems to be a convenient ploy to use terrorism at will to control the people with the use of fear. Furthermore, it was reported that she wants to “drone strike all dissidents and whistleblowers” (Leviticus 26:17).

Recently, the governor of Iowa said there are major Islamic terrorists that are living in every state that can strike any day. He received his information from the FBI, who have a long history of protecting the likes of the Clintons who are being funded by these terrorists.

I ask, who is the real threat to your freedoms America?

Don’t forget that the criminal in the people’s White House wants to rush 185, 000 Muslim immigrants into the USA by 2017. Does anyone see who is responsible for the chaos being created here?

What about the Republicans?

What of Paul Ryan, who handed everything over to the foreign agent in the people’s White House on his first legislative act, which was a complete and total sell-out of the America as we know it (Deuteronomy 28:36, 43).

For those who are warning of a revolution, I have a news flash for you, it started when America turned her back on God (Psalm 9:16).

In parallel to America and the past,

Politicians brought the Nazis to power and started the war. They are the ones who brought about these disgusting crimes.

Who are the criminals America? Is it the corrupt politicians or the people that tolerate their crimes? Americans know that these corrupt representatives feel that that are demi–gods above the laws of our Republic)

My measures will not be crippled by any bureaucracy. Here I don’t have to worry about Justice; my mission is only to destroy and to exterminate; nothing more.

Remember, the rule of law brings about peace while the rule of arbitrary policy by force creates war.

How to stop the next war

The only way to prevent the next war is to deal with those who are illegally working to create war.

Corrupt officials are forcing change through the chaos that they create.

The war that the American people have on their hands right now is to deal with those who are no longer working for the American Republic.

And ye, O peoples, to whom God gave the liberty to choose your own magistrates, see to it, that ye do not forfeit this favor, by electing to the positions of highest honor, rascals and enemies of God.

Add this to it: Vladimir Putin flatly says Obama set ISIS up. And he believes he has evidence to prove this.

Add more to it: why did Putin cancel a recent trip to France? Why did he run a civil-defense exercise involving forty million people? Did he, as some now allege, build enough bomb or even blast shelters for the whole population of Moscow? And why did he emergently recall every State employee, and employee of a government enterprise, and their families, from abroad?

Vote for treason or freedom?