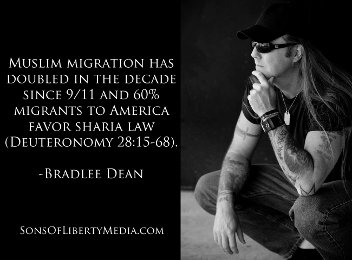 When you elect a Chicago community organizer who was never qualified for the office that he has been entrusted to hold, who clearly hates America, who persecutes law abiding citizens and has done more for the illegal aliens and the Islamic state then he has for Americans, it should be clear as to what America is dealing with.

On November 6, 2016, the criminal and foreign agent in the people’s White House once again exhibited his stance against America and her constitutional laws (Luke 3:19).

Barack Hussein Obama (Muslim name), while alluring illegals on American tax payer’s dime to this country, endorsed the notion of illegal aliens casting votes in the 2016 US presidential election.

“…[M]illenials, dreamers, undocumented citizens – and I call them citizens because they contribute to this country – are fearful of voting,” an interviewer told the president. “So if I vote, will immigration know where I live? Will they come for my family and deport us?”

“Not true,” Obama reassured. “And the reason is first of all when you vote you are a citizen yourself. And there is not a situation where the voting rolls somehow are transferred over and people start investigating, et cetera. The sanctity of the vote is strictly confidential.”

Obama should read the law!

Once again, the law stands as a stumbling block to this criminal (1 Peter 2:8). He failed to share with the American people that in order to vote you must do so lawfully. Here is what is required in Minnesota before voting:

If you cannot provide one of the above, you can provide an expired photo ID. However, if you do you’ll also need to bring proof of residency. A utility bill or rent statement dated within 30 days of Election Day would suffice.

Illegal aliens cannot, and will not produce this!

I have been blowing the trumpet for 8 years now making Americans aware of the fact that if Barack had the support that the media wanted you to believe that he had, including Hillary Clinton, why is it that he has been appealing to the illegal aliens for support and assailing those who uphold border laws? Simply put, he does not have the support.

How do illegal aliens contribute to our country?

Second, the useful idiot during this scripted interview called illegal aliens “undocumented,” and said, “I call them citizens because they contribute to this country” (Proverbs 19:9).

Undocumented illegal aliens contribute to our country? Let’s see if what she said lines up with the facts.

Take a look at Muslims from the east who are plundering countries that they are entering.

Muslim migration has doubled in the decade since 9/11 and 60% migrants to America favor sharia law (Deuteronomy 28:15-68).

More illegals are coming across from the southern border,

Crimes of the Illegal Aliens

From the unlawful acts of this criminal called the president to the advocating of the crimes of illegals within (Psalm 9:16), no wonder America is where she is.

Barrack Hussein Obama has released 165,900 “contributors” (illegal’s) back onto the streets of America, jeopardizing the safety and the welfare of those who have a lawful God given right to be here.

This, of course, is when he is not commuting more “contributors,” namely Muslim drug dealers. Barack Hussein Obama commuted the sentences of 111 federal inmates Tuesday, 96 of which were in prison for cocaine trafficking.

America can start this process by sending this foreigner back to Kenya where he came from and eradicate his 7 and three quarter years of unlawful policies (Deuteronomy 28:36).

I did not know that illegal immigrants could vote.