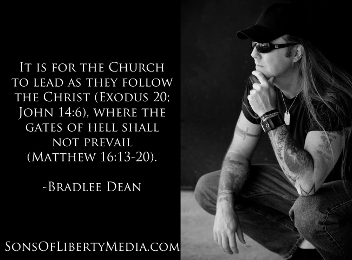 “Human passions unbridled by morality and religion…would break the strongest cords of our Constitution as a whale goes through a net.”

Has the church turned against God?

December 6, 2016 Headline: Confused Pastor Defends Trump and say’s Sodomite “Marriage” is the Law of the Land

Once again, the American Church has its role upside down as they turn and capitulate (Psalm 78:9). It is for the Church to lead as they follow the Christ (Exodus 20; John 14:6), where the gates of hell shall not prevail (Matthew 16:13-20)

The Declaration of Independence, which underlies the Constitution, holds that the rights of the people come from God, and the powers of the government come from the people.

We are a Christian people…according to one another the equal right of religious freedom, and acknowledging with the reverence the duty of obedience to God. –United States v. Macintosh (1931)

The church gives up too easily

Like President-elect Donald Trump, a prominent Baptist minister in Texas who backed Trump’s campaign efforts says that despite his opposition, same-sex “marriage” is “settled law,” and Christians should move on to another issue, such as abortion. (That is, where the American people are guilty of the blood of over 57 million babies since 1973)

This is not going to be re-litigated by the Supreme Court. That is the law of the land. I wish it were different, but it’s not different.

This is what the American people have been seeing and hearing far too long: The professed Christians agreeing with the enemy (James 4:4). No wonder why people are confused (Daniel 9:7). The Church doesn’t practice what God commands it to do (Proverbs 7:2).

These are cowards living out Ignorance in action as they attempt to spread their lack of faith in God motivated by the fear of man (Proverbs 29:25).

To regularly hear unscriptural teaching is a serious thing. It is a continual dropping of slow poison into the mind. ~J.C. Ryle

This also applies to the United States Constitution.

The saga of Elena Kagan

I wrote in a past article….

The stage has been set, and just in time. Before the elections, Obama came out in support of homosexual marriage. Of course, he first had to repeal DADT and place 225 homosexuals in key positions…such as the Supreme Court… before he made his announcement.

Such a one is Elena Kagan.

Elena Kagan is the former dean of students at Harvard. Contrary to Harvard’s founding mottos, “For Christ and the Church” and “For the glory of Christ,” Kagan is famous for “Queerifying Harvard.”

Kagan hired former ACLU lawyer William Rubenstein to teach “queer” legal theory, in which he taught courses on taking up new identities such as bisexuality, transgender f**k, involving polygamy, sadomasochism, and the sexuality of minors.

She also hired other radicals (a lesbian and a transsexual) to teach transgender law courses, as well as Cass Sunstein who has written in support of polygamy and free-for-all marriage relationships.

Kagan viciously attacked our military in opposition to “Don’t Ask, Don’t Tell,” even banning military recruiters from coming on campus. Kagan’s attempt to ban the recruiters was unsuccessful, and even after losing her legal campaign, she encouraged students to continue protesting them.

Kagan’s radical activism on campus was so toxic that there was even a campaign to make the entire university trans-inclusive, using Harvard’s “gender identity” non-discrimination policy to spew gender confusion among students on campus.

Elena Kagan has never judged a case a day in her life, yet Obama, unqualified for office himself, has seen fit to “qualify” her on the Supreme Court bench…just in time for the Court to review homosexual marriage.

The church ignores its own history

How deprived is the understanding of the modern church when it comes to its own history!

The Church should preach, “Repent and be baptized, every one of you in the name of Jesus Christ for the forgiveness of sins” (Acts 2:38) and establish righteousness through judgment (Isaiah 51:4). Instead, they just simply go along to get along as they lead the sheep into the ditch (Matthew 15:14). Of course, they do this for the approbation of men (Luke 16:15).

What a contrast to the preachers who thundered from America’s pulpits before, during and after the Revolutionary War, causing the colonists to stand up in the face of tyranny. The British labeled them as the much-feared “Black Robed Regiment.” The British were not the only ones who recognized them as the bulwarks of America’s Independence.

Mighty men they were, of iron nerve and strong hand and unblanched cheek and heart of flame. God needed not reeds shaken by the wind, not men clothed in soft raiment [Matthew 11:7-8], but heroes of hardihood and lofty courage. … And such were the sons of the mighty who responded to the Divine call. –Bishop Charles Galloway, 1898

The ministers of the Revolution were, like their Puritan predecessors, bold and fearless in the cause of their country. No class of men contributed more to carry forward the Revolution and to achieve our independence than did the ministers. … [B]y their prayers, patriotic sermons, and services [they] rendered the highest assistance to the civil government, the army, and the country. – Historian B. F. Morris, 1864

The Constitutional Convention and the written Constitution were the children of the pulpit. –Historian Alice Baldwin, 1918

Concerning the headline article I referenced at the beginning, I am here to tell you that nothing could be further from the truth. There has never been and never will be any such thing as “sodomite Marriage.” As a matter of fact, never in the history of mankind has there been any such thing.

No enactment of man can be considered law unless it conforms to the Law of God! -William Blackstone Commentaries on the Laws of England English Common Law

John Adams, the second President of the United States said, “Our Constitution was made only for a moral and religious people. It is wholly inadequate to the government of any other.”

Here gives way to the enemies of all righteousness (Acts 13:10). For they know how to lie better than the self-professed righteous know how to live out the truth (Hosea 4:6).

Son of Liberty Samuel Adams said, “A general Dissolution of the Principles and Manners will more surely overthrow the Liberties of America than the whole Force of the Common Enemy.”

The Church is to be the moral compass of society -President John Adams (Matthew 5:14-16)

The Church is to overcome evil with good. As our forefathers rightly exhibited, “Resistance to tyrants is obedience to God.”