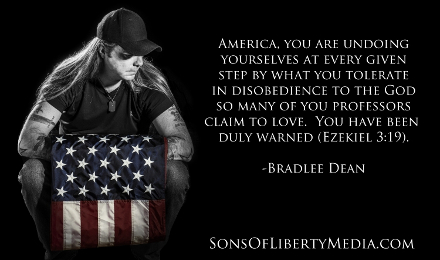 “The Lord shall bring a nation against thee from far, from the end of the earth, as swift as the eagle flieth; a nation whose tongue thou shalt not understand; A nation of fierce countenance…” This comes from Deuteronomy 28:49-50. And it’s happening to us now, because we reject prayer when someone offers it.

In May of 2011, I had the opportunity to give the opening prayer to the House of Representatives at the state capital in Minnesota. That door was opened at the request of a local representative named Ernie Leidiger R-District 47 A, to which I gladly responded.

Now, let me set the stage for you here.

As I entered the Capitol chambers, I was introduced to Speaker of the House Kurt Zellers as “the guy that gets things done around here.”

Before my prayer, I had asked the chaplain if I could provide a preface to my prayer to bring understanding by using an analogy. He approved, and off I went to the podium to give up my heart to God and to man (1 John 5:2).

Here is the entire transcript of my prayer, as supplied by the DFL Caucus media department:

When I arrived at the Capitol today I noticed all the writings upon the inside of the walls. On the Supreme Court Chambers you have Moses awaiting the Ten Commandments, God’s divine law. You have George Washington quotes, Thomas Jefferson quotes speaking of unalienable rights given unto us by our creator. And when I looked at that I thought what an awesome building and those in this chamber are very privileged to be here and I’m honored to be here as well … And if I can give a small preface to my prayer so my prayer has meaning.

I remember when I was a young man. I had a friend who founded a company in Fridley, Minnesota. This man built this company from the ground up as he blueprinted everything in great detail. He put his sweat, tears, everything into it until he established a great company. Nobody understood what sacrifice he put into his company except those that helped him along.

The company grew in such a proportion that he could now sell the company and he did. On the sale of his company the buyers agreed to keep him on to run the company for them and in the process the company sold. And when it was sold the buyers went against the contract and fired the founder. How foolish could they be? They thought once they had control of the company they could run it their own way and still prosper. And they failed miserably. [Excuse me]

And it sounds much like America today. America has the longest standing Constitution in the history of the world. And might I remind everyone here that we have one Constitution so let us come together and unite ourselves under its directives. Because we all know the problems didn’t come into our country in 1776, they came when we wandered from the founder of the company and tried running it our own way.

So let us pray.

Father God I just thank you Father for what you have bestowed upon us and through the sacrifice of our brothers and our sisters. Father God to ratify the Constitution of the United States. Father God, the fight, the bloodshed, and the sacrifice. From World War One to World War Two to Korea, Father. To Korea and Iwo Jima and Vietnam. And Father God, Iraq and Afghanistan. And I think about their sacrifice when I go, Father God, to Arlington Cemetery and I think that’s the reason I that fight. That’s the reason that I stand, that I encourage my brothers to do the same thing. They died so we could have the freedoms that we have today. And they ratified that Constitution and sacrificed their all for it. And I end with this. I know this is a non-denominational prayer in this Chamber and it’s not about the Baptists and it’s not about the Catholics alone or the Lutherans or the Wesleyans. Or the Presbyterians the evangelicals or any other denomination, but rather the head of the denomination and his name is Jesus. As every President up until 2008 has acknowledged. And we pray it, in Jesus’ name.

Right after I finished praying, one “hypocrite” chaplain came up to me and did his best to reprove me for using the “J” word (Jesus) in the House chamber, as if to suggest that I was to check my faith at the door before calling upon the God who gave us government (Exodus 18:21).

Apparently, he had been around enough whores and hirelings to believe that I was to follow in close pursuit. What a fool. I will never, by the grace of God, ask for permission from corrupt man to obey a just and holy God (Acts 5:29; Matthew 10:33).

First, I was labeled the “anti-gay preacher.” Then I was called the “bigot.” And then when the people figured out that I said nothing about homosexuality, they tried to figure out why there was such an uproar over my prayer.

Also, keep in mind that after this prayer was over, there were over 2,000 outlets that reported on it within 10 minutes.

This worked out in my favor because it exposed the state-controlled media for who they are and how they operate (Proverbs 26:27; Psalm 7:15).

Minutes after my prayer, and on cue, Speaker Zellers apologized on the House Floor:

Then tagged off to his little buddy Terry Morrows to follow up with their attack.

When their little show was over, they were swiftly removed from office as promised by our Heavenly Father (Psalm 2).

America will not heed the warning

Over and over and over again, I have warned what was coming behind the homosexuals, which are being used as nothing more than a political battering ram to give way to America’s sworn enemies, the Muslims!

Now, after the damage is done, everyone is starting to make the correlation.

On the same podium that I gave my Christian prayer, in the same rotunda, Somalian Ilhan Omar was sworn in to uphold the Constitution on a Koran, as an Imam prayed aloud in his foreign tongue. It was a staged event with 100 Muslims who cheered and put forth Allah as their god (1 Timothy 4:1). All this was done with the full support of the representatives and state-controlled media in the State of Minnesota.

After all was said and done, not a word of opposition was voiced.

You would think with all the light that has been brought to the American people concerning the crimes against God and humanity by these Muslims, this would come to a swift and speedy end, but we find that the opposite has been true.

This is what “the sheep being led to the slaughter” means. America, you are undoing yourselves at every given step by what you tolerate in disobedience to the God so many of you professors claim to love. I have literally hazarded my all to bring this to the American people and in honor to God concerning these issues. I am free of the blood of my brothers and sisters. You have been duly warned (Ezekiel 3:19).

Fear and democracy in Israel