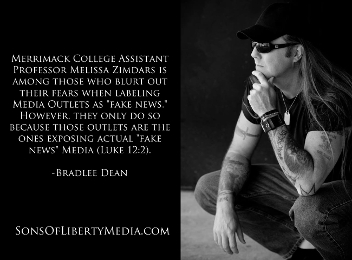 “Some people are asking which news sources I trust, and all I can say is that I read/watch/listen very widely, from mainstream, corporate owned sources (The New York Times, The Washington Post, The Boston Globe, The Wall Street Journal, Forbes) as well as The Atlantic, National Public Radio, and various local and alternative sources with different political perspectives.” So said Assistant Professor Melissa Zimdars. But what about those alternative sources she reads? How different are any of their political viewpoints from her own?

The mainstream media has been circulating a viral list of so-called “fake news” websites – and the list includes established news sites like TheSonsofLibertyRadio.com, Breitbart, Red State, the Daily Wire, Project Veritas and many other credible sources – but what we found was a leftist (criminal-minded), President bashing assistant professor in Massachusetts who is behind the effort to target and discredit legitimate news/media organizations (John 8:44).

For the record, it is called libel, and it is illegal.

Merrimack College Assistant Professor Melissa Zimdars, a 30-something, self-identified feminist and activist, who has expressed great dislike for the new President and Vice President created the list.

Zimdars published and circulated a list of “fake, false, or regularly misleading websites that are shared on Facebook and social media.” She said she began writing the list because she didn’t approve of the sources her students were citing.

In many cases, she offers no explanation for why the news organizations were included on the list.

The media double down on their lies

The media has a 21% approval rating and the state-controlled narrative is being called out for their defamation, libel, slander and lies on a continual basis.

Yet, the mainstream media outlets, in hopes of propping up yet more lies, such as The Los Angeles Times, circulated this list. The Times headlined its story, “Want to keep fake news out of your newsfeed? College professor creates list of sites to avoid.” And of course, the Times offered no details concerning Zimdars’ lack of qualifications or background.

Propagandists organizations such as CNN, the Washington Post, Boston Globe, New York Magazine, USA Today, Business Insider, the Austin American-Statesman, the Dallas Morning News and others spread the list like gospel and cited it in their reports.

As a matter of fact, Zimdars has not responded for clarification on her expertise or criteria for deciding which news sources to include on her list.

However, when Merrimack Vice President of Communications Jim Chiavelli was asked, he replied, “Thanks for your question to the president about professor Zimdars’ pedagogy. The college has no comment for this story.”

In response to the list, PJ Media’s Stephen Kruiser wrote, “It’s no surprise that a college professor compiled this list; what’s galling is that The Los Angeles Times ‘reported’ on it without mentioning that it’s complete garbage.”

Of course, it is! They all know that it is nothing but garbage, but this is what they do to continue to prop up the establishment, with which America is fed up.

In addition to her new job as an assistant professor, Zimdars is also a columnist and contributor for Little Village Magazine – a lawless-leaning magazine that says it’s focused on issues such as “racial justice,” “gender equity,” “critical culture,” “economic and labor justice” and “environmental sustainability.”

Zimdars’ social-media accounts are protected from public view, leading tweeter Vanessa Beeley to note that Zimdars “can’t take the heat. Named ‘fake media’ & then protected all her own media sites.”

But Newsbusters found tweets from Zimdars harshly criticizing President-elect and Vice-President-elect during the vice-presidential debate in October.

“Undocumented workers contribute more to this country (beyond taxes) than Drumpf ever has or ever will,” she tweeted on Oct. 4.

The same day, she tweeted to Pence that Hillary’s “basket of deplorables” comment does not equal “Trump’s constant sexist, racist, homophobic, and xenophobic comments.”

What do the mainstream media actually do?

The little professor was asked what media resources she read and trusted.

“Some people are asking which news sources I trust, and all I can say is that I read/watch/listen very widely, from mainstream, corporate owned sources (The New York Times, The Washington Post, The Boston Globe, The Wall Street Journal, Forbes) as well as The Atlantic, National Public Radio, and various local and alternative sources with different political perspectives.”

Let’s pull the curtain back on the media so you can see who is doing the reporting.

In 1917, Rep. Oscar Callaway entered a disturbing statement into the congressional record:

J.P. Morgan, a banker and a steel tycoon, hired 12 high-ranking news managers and editors, and asked them to determine the most influential newspapers in America. He wanted to control the policy of the daily press of the United States (that policy being whatever they wanted it to be). The 12 found that it was only necessary to purchase 25 of the greatest newspapers. An agreement was reached, the policy of the papers was bought, and an editor of their choice was placed at each paper to ensure that all published information was in keeping of the new policy.

In a nutshell, what are they doing? The news media is being controlled by very few people throughout major networks in the United States and worldwide. There are those who are trying to rearrange reality to become the reality they want you to believe.

“The New York Times is deliberately pitched to the liberal point of view.” – Herman Dismore Foreign editor of the NY Times from 1950 to 1960

“Our job is to give people not what they want, but what we decide they ought to have.” – Richard Salant (1914-1933) Former President of CBS News

“We are going to impose our agenda on the coverage by dealing with issues and subjects that we choose to deal with.” – Richard M. Cohen, Senior Producer of CBS Political News

Orders from the government

Former CNN journalist Amber Lyon said that she was ordered to report fake stories, delete unfriendly stories adverse to the Obama administration, and construct stories in specific manners while working for the left-wing network.

CNN is paid by foreign and the US government for reporting on some events, and not reporting on others. The Obama Administration pays for CNN content.

Taught to lie, to betray the people and not to tell the truth to the public.

The CIA gets control over all of the majority of journalists.

“We’ll know our disinformation program is complete when everything the American public believes is false.” –William Casey CIA Director

Truth be told, these people simply blurted out their fears when declaring “Fake News” media outlets were really those who were exposing their “Fake News” outlets for what they are (Luke 12:2). They hate the truth (Psalm 94:16).

Constitution protects America, not the world