American history is rife with writings, speeches and quotes originating from our Founding Fathers relating to the intent and extent of the powers granted to the Federal Government and conversely the rights endowed to the people by their Creator. The common theme built into every clause of the Constitution, the Amendment process as well as in the writings found in the Federalist Papers cannot be denied or ignored. Ignored at least by anyone with an ounce of intelligence or common sense. Granted there is a spectacular shortage of both of those intellectual qualities which evidences itself no more stunningly than it does in those ideologues working the District and Federal Appeals Courts in this country.

The Constitution protects the people from the government

The “establishment clause” and the “separation of church and state clause” are made up terms not found in any Amendment or Constitution Article. The establishment word has been hijacked from the intent and bastardized by the left. Both of those fabricated terms are used, spoken and incessantly written about by ideologues who wish to impose their faithless views on the people. It is doubtful many Americans know that those clauses, as espoused and defined by the enemies of religious faith are creations of the left and are found nowhere in our founding documents.

For those who have been subjected to Common Core schooling or those who have had their memory cells deleted by years of harmless cannabis use, here is the not so complicated First Amendment.

Congress shall make no law respecting an establishment of religion, or prohibiting the free exercise thereof; or abridging the freedom of speech, or of the press; or the right of the people peaceably to assemble, and to petition the Government for a redress of grievances.

Note the first word. It is Congress. Congress is made up of Federal Government lawmakers. The Amendment does not say, no person or no business or even no state shall establish a religion. It says Congress shall not do it. Remember the Constitution controls the Federal Government, not the people, not organizations and not the states.

Of course it’s very likely that the Founders would not condone a state forcing a particular religion on its citizens and no right thinking person would either. However, they did use the word Congress and quite intentionally so. So why did they? Simply because the Constitution was intended to control the central government, not individuals or any of the several states. Each state therefore is free to establish anything it desires, that the people of that state will abide. They are also free to create constitutions that prohibit such establishment. But the US Constitution takes no stand and has no authority concerning religion, by the people nor by the states. The Amendment process is available to anyone who thinks the Constitution should do more.

These intentional interpretive violations of the Constitution have become commonplace as not just federal courts across this country have ignored its edicts as written and intended, so too have many state courts. This is a travesty and serves to undermine the purpose of our Constitution which was to keep the Federal Government from becoming an all-powerful and unresponsive authority. Because we ignored these manipulations and fabrications of intent, those assaults already implemented will remain and others will no doubt come to be.

What has been established is that the Constitution protects the people from the government. The question here then might be, which people? Does it have the authorization to force Iran to allow Christian Churches to exist? Can our Constitution require that the dictator of Venezuela allow their people to practice capitalism or demand that Australia stop disarming its law abiding citizens? Can our First Amendment prevent Putin from including journalists in his “now you see them, now you don’t”, magic act?

Constitution of the United States, not the world 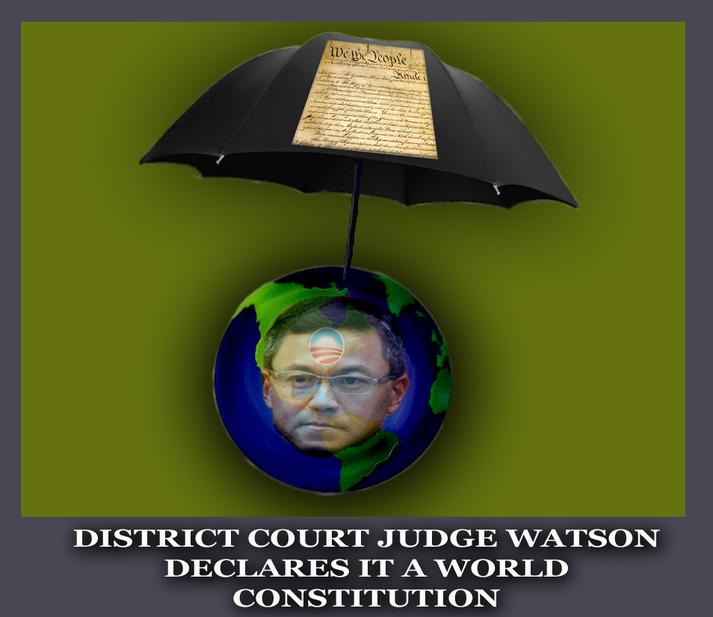 Since these suggestions are clearly ludicrous then there must then be limits to the authority of Our Constitution. That limit is plain. The controlling word here is OUR. Which means the people of the United States of America. Not those of Senegal, Mumbai or, God forbid, Syria.

When that leftist dupe of a judge from the Hawaii District Court chose to use the made up term “establishment clause” to prevent President Trump from screening possible terrorists, all of whom are non-citizens, he has taken that invention to yet another despicable level.

If this court jester were to take just one minute to think about how ignorant and short cited his ruling was, even he might be as embarrassed for himself, as we are of him. For example, if the hundreds of people that Trump wants to deter entering the US until they are properly vetted, are protected by our Constitution, so too then are the 7.2 billion other people of the world. That would mean that each and every one of them has rights under our Constitution. Rights that would allow them free passage into our country.

A little note to that so called judge. It’s called the US Constitution. Not the Global Constitution. It protects citizens and those legally in America from the government and government idiots such as yourself.

President Trump has said many times that bringing in people from areas of the world where Islamic terrorism abounds could turn out to be America’s Trojan horse. As bad as that is, it’s actually much worse. The Trojan War, a 10 year epic struggle of many bloody battles by the Greeks to retake the city of Troy, culminated with the Greeks building a huge horse which appeared to be an icon or symbol of a god. But in truth it was a war machine which hid a number of Greek soldiers inside. Once the Trojan horse was brought into the city by the foolish leaders, the concealed soldiers opened up a hidden door and in the dead of night unlocked the gates to the city for the Greek army. The slaughter that ensued ended that war.

So what is the difference? How then is the analogy of today’s Trojan horse, better known as the Refugee Program, different from that epochal Greek struggle? The answer; the leaders of the defense army of Troy were fooled. They were unaware of the hidden danger which posed as a gift from the gods.

This modern day Trojan horse has none of that stealth. It might as well have red and white flashing lights accompanied by blaring speakers announcing the presence of Islamic murdering terrorists. Our leaders are not being fooled. They are just simply fools.