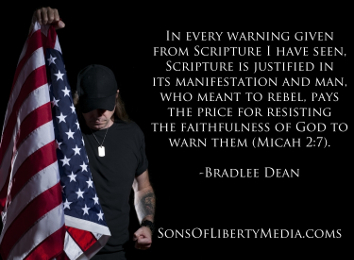 “Then whosoever heareth the sound of the trumpet, and taketh not warning; if the sword come, and take him away, his blood shall be upon his own head.” (Ezekiel 33:4) In other words, when God warns you of something, take heed!

It seems that no matter what the circumstance, no matter how extreme and dangerous things might be, people want to test God’s faithfulness when He warns mankind of impending danger. Is it human nature that wants to rebel against the Spirit of Christ (John 16:8) so the flesh can attempt to justify itself? Of course, it is, and it is what I have dealt with since the first day of ministry (Romans 7:9). In every warning given from Scripture I have seen, Scripture is justified in its manifestation and man, who meant to rebel, pays the price for resisting the faithfulness of God to warn them (Micah 2:7).

One such incident is the story of a young man named Zach, who was part of a drug rehab program here in Minneapolis, Minnesota. Zach was, I’m sure, slapped on the hands in court by a soft judge (soft judges make hardened criminals) and given a plea bargain, either jail, or the drug rehab program for his crimes committed (1 John 3:4; Exodus 20). Of course, the obvious choice for a young reprobate would be to spend his time in rehab rather than a boring jail cell.

After entering the program, shortly thereafter he escaped without consent and went missing for a couple of weeks, only to find that he made a bad move. Zach had jumped out of the frying pan into the fire. Things out there were worse than things in rehab.

Young people today have been taught an entitlement mentality and feel somehow or another that when people work hard to get to the top of the mountain that they fell on top of it.

Well, Zach soon ended up bringing himself back to drug rehab only to find himself in a circle being called out by a faithful witness (Proverbs 14:25) who told him, “You know Zach, there is no turning back. You know that you can never go back.” All the while Zach, affirmed the words that this man had spoken to him as a warning concerning his former life choices (Deuteronomy 30:19).

All scripture is given by inspiration of God, and is profitable for doctrine, for reproof, for correction, for instruction in righteousness: That the man of God may be perfect, thoroughly furnished unto all good works. – 2 Timothy 3:16

A couple of days later, Zach was upstairs while everyone was sleeping “huffing” paint from a helmet. “Anything to get high” was Zach’s motto, and it cost him the ultimate price. Zach fell over dead from an overdose.

When the other boys in the program were awaken to see what all the commotion was about they found that Zack had made the choice (Romans 6:12-13) to inhale dangerous chemicals that took his life.

What is of interest here friends is that many of those boys that saw Zach lay in a lifeless state started to yell at others saying, “Where is your God now?”

This was supposed to be a Christian rehab. These boys saw the warnings given to Zach. They saw Zach reaffirm what was said was true, “no going back.” Instead of blaming Zach for making the wrong choice, they wanted to blame God by saying “Where is your God now?”

One that stood by listening to enough of the hypocrisy said, “The same place He was when He was warning Zach.” (1 Corinthians 12:10).

There is a story of a man in England that soon learned his lesson when he took the time to pay attention and listen to who the responsible party was.

A man in a London airport decided to purchase some English Butter Cookies. He opened the small tin, took one out, then placed the tin at his feet. After waiting for his flight for some time, a middle-aged woman smiled politely and sat next to him. To his astonishment, without a word of permission she reached down, took a cookie out of the tin and ate it.

He couldn’t believe what the complete stranger had just done!

Suspecting that it may be a local custom, he smiled awkwardly and took a second cookie himself. She then took a third.

Then she took the very last cookie, looked at him, broke it in half and offered it to him. The audacity of the woman! Different words such as impudent, rude, brazen and presumptuous flashed through his mind.

As he was about to express his thoughts, he bent down and saw that his identical tin of cookies was still at his feet. In an instant, he realized that he had been the brazen, rude and impudent, presumptuous person. He had been eating the cookies of a complete stranger! He also realized how her response to his actions had been very gracious.

The good thing about this parable is that this man learned his lesson unlike those that shut their eyes and ears to the Spirit of God.

History tries to teach America, but she will not learn