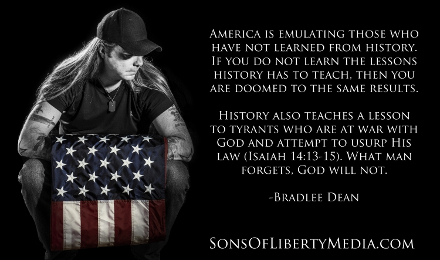 “Some even believe we (the Rockefeller family) are part of a secret cabal working against the best interests of the United States, characterizing my family and me as ‘internationalists’ and of conspiring with others around the world to build a more integrated global political and economic structure – one world, if you will. If that’s the charge, I stand guilty, and I am proud of it.” That was David Rockefeller, boasting of his role. That’s part of history, from which Americans never learn.

America tolerates the elites, and their crimes

I know that people in this country love to magnify the crimes of so-called “elites,” but take a look at what the American people have tolerated when it comes to the crimes of those that rule behind the corrupt politicians and propagandists. These are those who have been allowed to create chaos with the purpose of bringing order out of it.

From the charades that are going on with Russia and Trump through diversionary measures to get America’s eye’s off what really is happening, to Obamacare, to Pizzagate, to Hillary Clinton’s email scandal, to FBI Director James Comey and obstruction of justice when it comes to the likes of Anthony Weiner, etc. All this is nothing but confusion (Daniel 9:7).

This week, Time magazine featured a picture of a man dressed as a woman with the headline “Beyond He or She: How a new generation is redefining the meaning of gender.”

These are the same people that mean to demoralize and subject Americans to their tyrannical ways.

Samuel Adams warned long ago, “While the people are virtuous they cannot be subdued; but when once they lose their Virtue they will be ready to surrender their Liberties to the first external or internal invader…” (Deuteronomy 30:19; Romans 6:16)

This is all foreign to America as we all know it.

When you think of the people that are behind the scenes attempting to establish a global system (a war against God and man) like that of the Rockefellers, Rothchilds, Soros, Bushes, Obamas, etc… and the corrupt politicians who play to special interests, as well as those countries that are allied with their covenant of hell (Isaiah 28:18) in helping push the agenda forward, you need to know that on this side of Jerusalem, God was faithful to warn every one of us (Proverbs 14:25).

The man who found himself in hell wanted Abraham to warn his father’s house of the hell they were going to come to which he was in, but then it was too late (Luke 16:19-31).

Hell is the consequence of un-repented sin before God. We are to fear God, not hell (Proverbs 6:16). Therefore, hell fire preaching is not scriptural (Luke 12:4).

Do not forget those who complain and do nothing while allowing these hellions do the things that they do are just as responsible.

Who would you say is guilty of the crimes committed? Those who actually advocate and execute the crime, or those who tolerate commit the crimes? Before God, both are guilty.

At the entrance of the National Archives in Washington, D.C., you will see a monument stating, “Study the Past.”

Why study the past? Our forefathers suggested this so we might learn from history. They did not want us to commit the same mistakes.

History has shown time and time again that when a nation departs from God, there will be a tyrant in the midst attempting to move into His position. Devastation and massive loss of life follow that rise in power. This is what God warned would happen to nations that refuse keep His commandments (Leviticus 26:21).

God commands us to go back to the old paths “where is the good way” (Jeremiah 6:16), not to dare His justice by taking on the new paths.

Here are ten lessons men have learned from history:

America is emulating those who have not learned from history. If you do not learn the lessons history has to teach, then you are doomed to the same results.

History also teaches a lesson to tyrants who are at war with God and attempt to usurp His law (Isaiah 14:13-15). What man forgets, God will not.

What did Napoleon Bonaparte say? Those who oppose God and His Word will be conquered – and that is exactly what history teaches us.

Let me show you the little-known history of those who dared to crucify Christ, kill His apostles and behead John the Baptist. Let me also show you what happened to tyrant Mussolini, French Queen Marie Antoinette, godless Voltaire and the vain Senate of Rome.

We must all appear before the judgment seat of Christ; that every one may receive the things done in his body, according to that he hath done, whether it be good or bad. -2 Corinthians 5:10

And as it is appointed unto men once to die, but after this the judgment. -Hebrews 9:27

And I saw a great white throne, and him that sat on it, from whose face the earth and the heaven fled away; and there was found no place for them. And I saw the dead, small and great, stand before God; and the books were opened: and another book was opened, which is the book of life: and the dead were judged out of those things which were written in the books, according to their works. And the sea gave up the dead which were in it; and death and hell delivered up the dead which were in them: and they were judged every man according to their works. And death and hell were cast into the lake of fire. This is the second death. And whosoever was not found written in the book of life was cast into the lake of fire. -Revelation 20:11-15

All the miseries and evils which men suffer from vice, crime, ambition, injustice, oppression, slavery and war, …

God is always in place