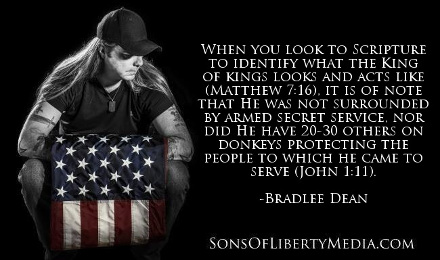 We recognize no sovereign but God, and no king but Jesus!” So said John Hancock, President of the Continental Congress, April 18, 1775.

First, think of this, the greatest man in History is Jesus!

When you look to Scripture to identify what the King of kings looks and acts like (Matthew 7:16), it is of note that He was not surrounded by armed secret service, nor did He have 20-30 others on donkeys protecting the people to which he came to serve (John 1:11).

Tell ye the daughter of Sion, Behold, thy King cometh unto thee, meek, and sitting upon an ass, and a colt the foal of an ass.

And the disciples went, and did as Jesus commanded them,

And brought the ass, and the colt, and put on them their clothes, and they set him thereon.

And a very great multitude spread their garments in the way; others cut down branches from the trees, and strawed them in the way.

And the multitudes that went before, and that followed, cried, saying, Hosanna to the son of David: Blessed is he that cometh in the name of the Lord; Hosanna in the highest. –Matthew 21:5-9

Second, the first president of the United States, George Washington, was hailed as “first in war, first in peace and first in the hearts of his countrymen.” He led by example as he followed the Christ (1 Corinthians 11:1).

If you know your history you know that during the Revolutionary War, George Washington didn’t send someone else to go in his stead; he took responsibility and went himself to lead the call for independence on the behalf of the country and the people he loved.

During this time, he had little to no money to fight the war, but he fought on with what he had and beat back the tyrant King George.

George Washington was also known as the man who could not die in battle. He was shot at several times with bullet holes in his jacket, yet he survived unscathed. He told his family, “By the all-powerful dispensations of providence, I have been protected beyond all human probability or expectation.”

Like King David, God protected Washington from his enemies (Psalm 71:3).

Third, in the past half-century, we have seen the corrupt in government slowly usurp their authority and declare war on the American people. The proof is found in the over the top methods of “protecting” the president and how they have risen to ridiculous measures. One has to ask the obvious question, who does the President work for?

Anyone who travels to Washington, DC will know what I am talking about. When the president’s motorcade goes through town, armed militant officers block off every road and any building the president enters is searched over with a fine-toothed comb.

Why would they need to do this if they have the support of American people?

The Secret Service now has 3,200 employees, and whenever the president leaves the White House, the Secret Service calls on other federal, state, and local agencies to heighten security measures.

Until Harry Truman’s presidency, former presidents were dropped off at their homes and were provided no special pension, security, or other benefits. They were simply told “Thank you for your service and have a good day.” They would become an average American citizen, just like those they served.

As a matter of fact, President Truman would take daily walks around Washington, DC with a bodyguard or two in tow shaking the hands of his constituents.

What has happened since then? When presidents work for the people, they feel safe enough to walk up converse with them; if at this point you are saying that things have gotten much worse in this country, you simply prove my point. Corruption in America is an exhibition and an expose of what the government is and is not doing.

However, when they work for special interests and are being treated as crowned kings (which they are not), they suddenly feel that they need to be protected from their constituents. Is the writing on the wall? Yes, indeed it is.

Look at the parallel between Washington and the current administrations:

… every word of (the Constitution) decides a question between power and liberty. As the government increases control, this leads to a corresponding decrease of individual liberty and responsibility.

The real problem is when all this power becomes centralized and is left unchecked by the public, then comes the rationale that “they have the badge, they must be right.

Thomas Jefferson, who lived through the era of the Revolutionary War, warned:

It has also been said that laws are most numerous when the commonwealth is most corrupt. Thousands of unconstitutional policies are being laid on the backs of American people on a yearly basis.

Cleary, America is corrupt! The politicians are corrupt because the people are corrupt. To say or act otherwise is most disingenuous, and ignorant to say the least (Hosea 4:6).

It further solidifies the point that our representative government does not serve the people they swore to serve. They are obviously serving special interest groups which need to protect their man/woman from the American people they purport to serve.

Somehow, the people in this country act as if the presidents were somehow above the law that they swore to uphold. Because of this, they then carry some unspoken title of nobility, a nobility that usurps the law, which our Constitution clearly forbids!

No Title of Nobility shall be granted by the United States: And no Person holding any Office of Profit or Trust under them, shall, without the Consent of the Congress, accept of any present, Emolument, Office, or Title, of any kind whatever, from any King, Prince or foreign State.

Here’s something to think about before going to the next point.

Do your best to forget about American boys and girls that are sent to fight unconstitutional wars abroad, as well as the police that are subjected to all sorts of danger on the behalf of those that sent them to war both here and abroad.

Let’s get to the final points…

How is the President protected today?

Did you know that back in 2001 the Secret Service awarded a contract to General Motors to custom make the presidential car?

Although the car still has the look of a Cadillac DeVille, it is actually built on a chassis for a sports utility vehicle.

With all the extras that are built into the car, there is substantial need for a heavier-duty chassis. The windows have five layers and can stop armor-piercing bullets. The doors are 8 inches thick and cannot only block projectiles but also keep out chemical attacks through a special extra-tight seal.

The chassis is reinforced to protect the passengers from bombs underneath the car. All of the car’s bodywork is armored with a combination of steel, aluminum, titanium, and ceramic. The gas tank has special armor and is surrounded by foam to prevent it from exploding if it is shot.

In addition to defensive capabilities, the car also has some offensive weapons. The car is fitted with tear gas cannons to disperse crowds. Of course, “The Beast” generally travels in a large motorcade surrounded by other Secret Service vehicles, so the situation would have to be dire for any weapons to be used.

There are two pints of blood of the president’s blood type in Cadillac One at all times.

The back compartment, where the president rides, can be sealed against not only chemical attacks but also against nuclear contamination. Even when the tires are punctured, the car can continue driving on them.

Between the motorcades, airplanes, helicopters and security entourage, travel for a U.S. president is an insanely complex and highly orchestrated endeavor, as well as the costing the American taxpayers.

That quick travel and those high costs are a result of a very well-organized system of transportation. The motorcade, for example, includes a route car—along with about 20 to 30 motorcycles—that comes through before the rest of the motorcade to close off all the exits, intersecting streets, and to push cars to the outside of the street.

Then comes the local police, followed by the “secure package,” a group of cars that includes two identical (they even have the same plates) armored presidential limos.

The question that I have for you is, who does the President work for? Read Deuteronomy 17:14-20.

No rules, no holds barred: the swamp offensive