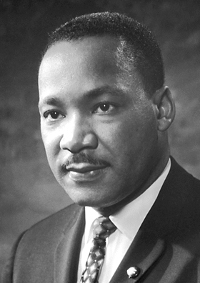 JFK was alive to hear King’s famous “I Have a Dream” speech. Both men were assassinated – their dreams shattered by bullets.

Americans do not bow to power – we enjoy a three-part government structured with checks and balances on executive power. Laws are designed to be changed peacefully through open debate and votes by elected representatives of the people. The current trend of divisiveness and anarchy fomented by Obama’s Leftist “resistance” movement is designed to collapse American democracy and our balanced three-branch system.

What is the purpose of relabeling illegal immigrant children with the romanticized term “Dreamers?” Are the dreams of legal American children less valuable? These are important questions to consider because they define our national priorities. President Trump prioritizes American children and American workers. His America-first promises and policies are designed to preserve and protect American sovereignty, American democracy, and the legitimacy of American territorial borders.

The 21st century globalist elite have a dream too. They dream that the Leftist/Islamist axis they support will create enough social chaos to destabilize America sufficiently to enact martial law. Social chaos is so frightening to people that they will willingly surrender their freedoms for the safety and protection the militarized government provides. Then like vultures the globalist elite will swoop down to control the military and internationalize the country for membership in their global collective. That is the 21st century dystopian dream of the globalist elite – they intend to rule the world.

For two generations American public and private education has indoctrinated American children toward collectivism (socialism/communism) and away from democracy. The socialist/communist structure centralizes all power into the hands of the elite socialist/communist members of the Party. There is no representation of the people – the collective is ruled entirely by the self-serving dictates of the elite. There is no private property or individual rights in socialism/communism – only a subservient collective. Global collectivism is the structure of one-world government.

Americans must decide their future. Do they want to destroy the American democracy that preserved and protected their individual freedoms, rights, and upward mobility and surrender the freedom and control of their lives to the Globalist Party elite? Or do they want to protect American sovereignty and their individual rights and freedoms guaranteed by our extraordinary Constitution?

On the night before Martin Luther King Jr was assassinated he spoke at a church in Memphis and said:

America must decide what their promised land will be – will it be an independent America of freedom and equality? Or will it be a land of masters and slaves promised by the Globalist Party? You decide.

Immigration in Israel and America