To Robert Goodell, Commissioner of the NFL. <officeofcommissioner@nfl.com>

The people of this country do not support these childish portrayals on the field. The American flag stands for freedom and liberty. I will not support any organization (or its advertisers) who disrespect it. Therefore,I am now focusing my activism to encourage more people to boycott the NFL teams and their advertisers which allow and support the kneeling during the anthem – or any disrespect of the flag or our nation.

I also support boycotting the sponsors who place advertisements during these games. I am sure you are aware of the precipitous drop in NFL attendance and TV viewing this year. Most of the people polled on this topic who are staying away blame the anthem disrespect as the reason they are not attending or watching. It is only going to get worse for you and the league, because the NFL failed to take a stand against this when it first started two years ago and people are sick of it.

My history with the NFL

I grew up with the NFL – the Cowboys, the Bears, the Saints. I have many wonderful memories of Staubach, Ditka, Archie Manning, and many others. It is a terrible shame that the league I used to love has devolved to where it is now. The very country and people who supported this league and grew it into greatness over the decades are now being disrespected. It is evident that the NFL leadership and players wish to commit economic suicide.

The kneeling players are on contract with their teams, and the contracts include limits on behaviors as well as explicit rules of conduct. By now, these contracts should all contain clauses prohibiting any show of disrespect for the anthem, flag, or making political statements during a game.. It should be self-evident that showing disrespect to this country and the very people in the stands paying these players’ and coaches’ salaries qualifies as unacceptable behavior.

They knelt during the anthem – in the UK 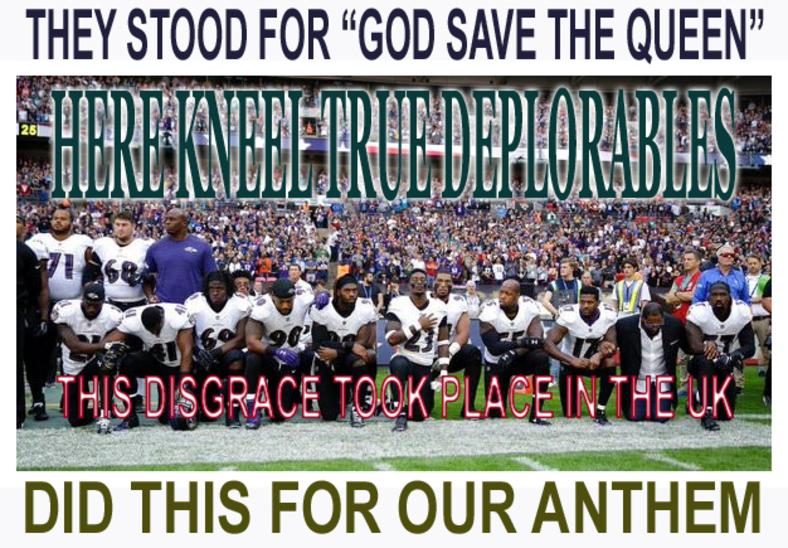 I understand that all the players in the Baltimore Ravens and Jacksonville Jaguars knelt during the national anthem in London yesterday. Do you think the average American supports this behavior? No. It is a travesty and insults us all. This behavior will continue to alienate viewers and former ticket-holders. The cognitive dissonance is astounding. Many of these players are millionaires because of the greatness of opportunity in this country. They were so oppressed they received full scholarships to college, and hundreds of thousands if not millions in guaranteed payouts to play a sport. If that is “oppression”, then I wish I had been so “oppressed”.

The trope that they are expressing some “solidarity” with those who are “oppressed” is a falsehood. If these players really wanted to express solidarity, they would engage with their communities directly and help support at-risk families. They would help train idle young men in skills for jobs. They would volunteer to coach Pop Warner leagues. Instead, they take the easy way out by virtue-signaling in front of people who paid to see a football game. They poke America in the eye.

We just decided not to accept this childish behavior anymore.

I would challenge these same kneeling players to leave the United States if they feel so oppressed. If they find the culture so racist. I would challenge them to live under a real oppressive regime which limits their speech; where the very act of disrespect they force upon viewers now would result instead in their incarceration.

This is a wonderful country in which liberty and justice for all is a great virtue, as well as the law of the land. The NFL used to be a great league. Now I have only contempt for what it has become.

Look what you’ve reaped, Commissioner, because this is what you have sown.